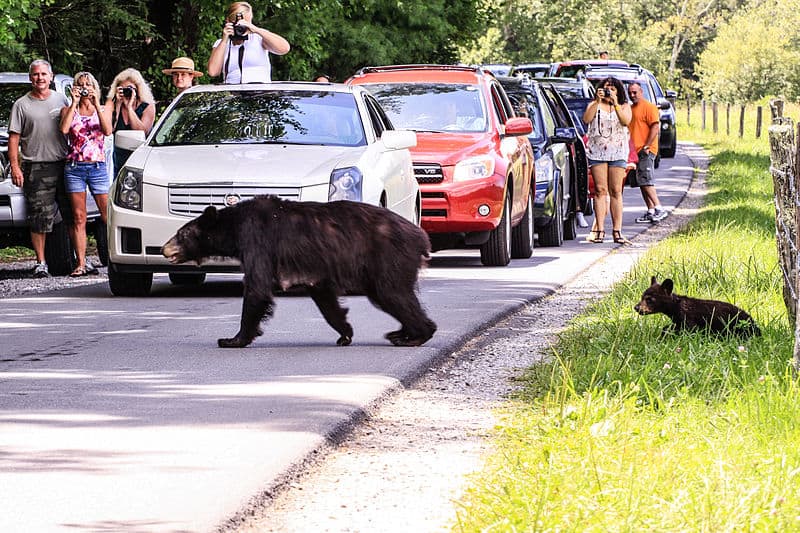 A bear sighting at the GSMNP makes for a great memory that won’t soon be forgotten. If you are planning a trip to the Smokies, you may be wondering when the best time to see bears in the Smoky Mountains is. After all, they are pretty much the face of the park and Gatlinburg.

As you may know, bears hibernate in the winter. According to bear.org, black bears hibernate for up to 7.5 months a year. It can really vary based on how available food is but generally black bears will go into hibernation sometime around September – October and remain dormant through April. You can learn more about hibernation here.

Best time to see bears in the smoky mountains

Having determined when they are probably laying hibernating and making themselves scarce… you can assume that the best time to spot a black bear is going to be in the spring, summer or early fall. I would say any time in May through September will be your best bet, I saw a young male recently in July.

It’s common knowledge that black bears can be seen all over Gatlinburg and the Smoky Mountains National Park, we were excited to see one right out in the creek outside of our hotel room. If you do a bit of exploring you are likely to see one.

How many black bears are in the Smokies?

There are around 1500-1600 black bears living in the Smoky Mountains National Park. The park is one of the largest protected areas where black bears live in the wild in the eastern United States. The black bear is kind of like the mascot for the Smokies, you see black bears on everything you can buy or rent. If you visit the park there is a very good chance you will encounter one.

Where are the best places to see a bear in Gatlinburg?

There are many places because they are literally all over the place. One common location is Cades Cove. It’s an 11 mile loop to circle the cove, you will see many other tourists driving through here in the busy season trying to catch a glimpse of black bears and other wildlife. Allow 2-4 hours time for this excursion, maybe more if you plan on doing a bit of exploring or having a picnic perhaps.

I was staying at a Lodge just about a mile off of the Gatlinburg strip last month and saw a young male black bear right outside our room in the creek. Every time we looked off of our balcony there he was. See the picture below. He was obviously begging for food, someone must have been dropping him snacks. Feeding bears in the Smokies by the way is a big no-no and illegal.

Another place where many bear sightings are reported is Roaring Fork Motor Nature Trail. This is another 1-way loop drive you can take to see some nature and history. There are many old cabins and historical type sites you can see. I’ve only made this drive a couple of times and haven’t been in a while but it’s definitely very neat and if you are a photographer you can get some good pics of nature and your family.

You may also like:  Do Marigolds Keep Rabbits Away?

Also, you can find Rainbow Falls here which is a really popular waterfall. It’s a 5.4 mile round trip hike and is rated as moderately strenuous. So pack accordingly.

Another place to see a bear is Ober Gatlinburg. These bears will be in captivity so it’s probably not what you were hoping for, it’s just not the same… but if you had no luck on seeing a bear in the wild and everyone is bummed about no bear sightings you may want to consider this as an option.

How big do black bears get?

Males may weigh around 250 lbs in the summertime, but can double their weight in the fall when they are fattening up for winter. There have been reports of bears weight upwards of 600 lbs. The females are much smaller, weighing around only 100-120 lbs.

Black bears can live anywhere from 12-15 years. It is said that bears who have had regular access to human food may only live for half of this time. So don’t feed the bears.

What do I do if I encounter a bear?

First and foremost the consensus is to stay calm. Do not approach the bear. It’s best to turn around and go back the way you came, especially if it appears to be a mother with cubs nearby as they can act aggressively if they feel threatened.

Most of the time bears will flee when they encounter humans, however in the national park these bears are protected and are probably pretty bold. So it is best to just do the right thing and go the other way.

If you get into a situation where it requires that you defend yourself, then a can of bear spray may come in handy. Of course it most likely would never come to this as bears as long as you follow these basic guidelines for bear encounters, but maybe better safe than sorry?

Can I feed the bears?

Absolutely not. It is illegal and irresponsible to feed the bears. Additionally, if a park ranger catches you, you can receive a fine of up $6,000 and a jail sentence of up to 6 months. As I mentioned above, allowing the bear to eat human food and trash also will decrease its lifespan significantly. It can also make the bear too brave and result in a bear attack. This could result in a person being injured and the bear being euthanized.

Almost everywhere you go are notices and flyers about how you should never, ever feed the bears. This is taken very seriously in the Smokies and I suggest you take it seriously as well.

Are black bears dangerous and will they attack me?

They are bears, sure they can be dangerous if provoked or threatened. Especially a mother with cubs. They are wild animals and can be unpredictable. Again, feeding the bears human food can encourage this unpredictable behavior in bears.

Bear attacks on humans are very rare. I think if you are sensible about bear encounters, keep your distance, and follow the guidelines in the link above, it is not something you would ever have to seriously worry about.

However, if you are ever attacked you should not play dead. This is a myth, it didn’t work out too well for Leo DiCaprio either. Fight back with anything you have at your disposal, make loud noises. Do not give up and let the bear think you are food. Provided that you escape the encounter, immediately report it to a park ranger or the Wildlife Resources Office.

How fast can a black bear run?

Based on what I’ve read, a lean black bear can run up to 30mph. Now I have not raced a bear recently so I’ll have to take the internet’s word for this. The main thing you should take away from this is that you cannot outrun a bear.

If a bear just leisurely approaches you at your campsite or while you are out hiking, you should scare it off with loud noises like “Get out of here bear!” Something like that. If a bear charges at you, they say not to run. You should stand your ground and wave your arms in the air and make noises to deter the bear.

Are there grizzly bears in the Smoky Mountains?

There are no grizzlies in the Smokies, or Tennessee at all for that matter. There is only one species of bear in Tennessee and that is the black bear. Grizzly bears can be found in a select few states in the US.

You may be thinking then why is the NBA team in Memphis, Tennessee called the “Memphis Grizzlies?” This team was originally in Vancouver, Canada and apparently on Vancouver Island there have been instances of grizzly bear sightings.

If you travel to Gatlinburg expecting to see black bears everywhere you go, you may be disappointed. However if you just simply explore the park, ask some locals, and visit a couple of the places mentioned in this article, you have a better than average chance of seeing one in the wild. Good luck and be safe!