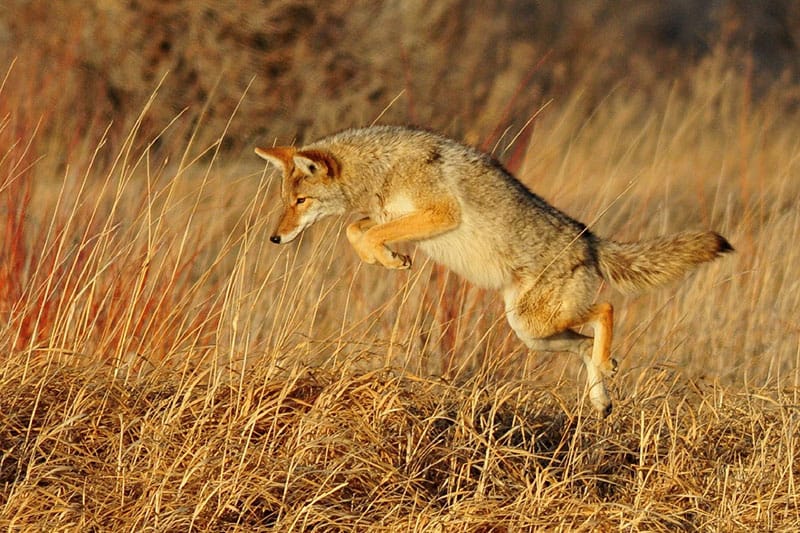 Coyotes have existed in California long before the state’s formation. However, due to urban expansion and an increase in farmland in both the northern and southern parts of the state, coyotes are making their way into the cities, where their presence is much more noticeable. In this article we’ll take a further look at the coyotes in California and learn more about the population, and status of them in the state. 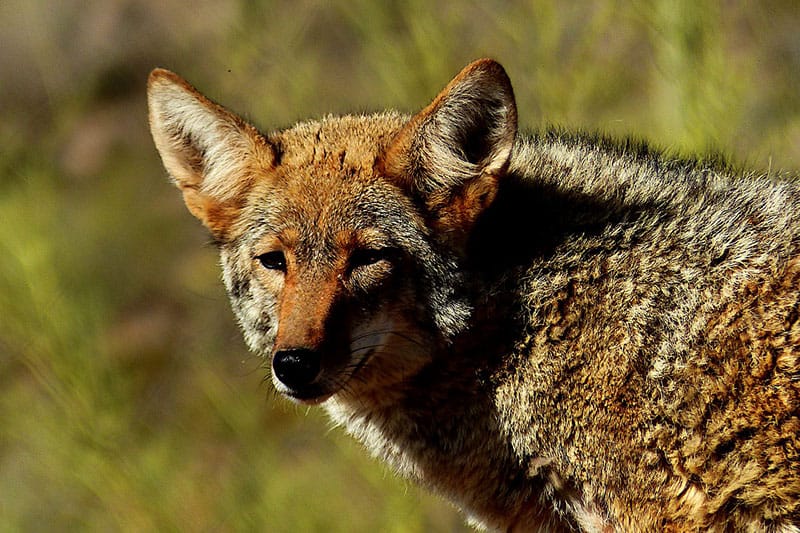 Common name: Coyote
Scientific name: Canis latrans
Family: Canidae
Length: 39 inches – 53 inches, though can reach up to 59 inches
Tail: 16 inches
Ears: 3 inches to 5 inches
Weight: 15 – 44 pounds, though they can reach up to 75 pounds
Average lifespan: 10 years in the wild/18 years in captivity.

California is home to five different subspecies of coyote:

Coyotes live alone in both the deserts and mountains of California and only gather into packs to hunt larger game such as deer. They tend to stay away from urban areas, but lack of habitat and human interaction has caused them to appear more often. 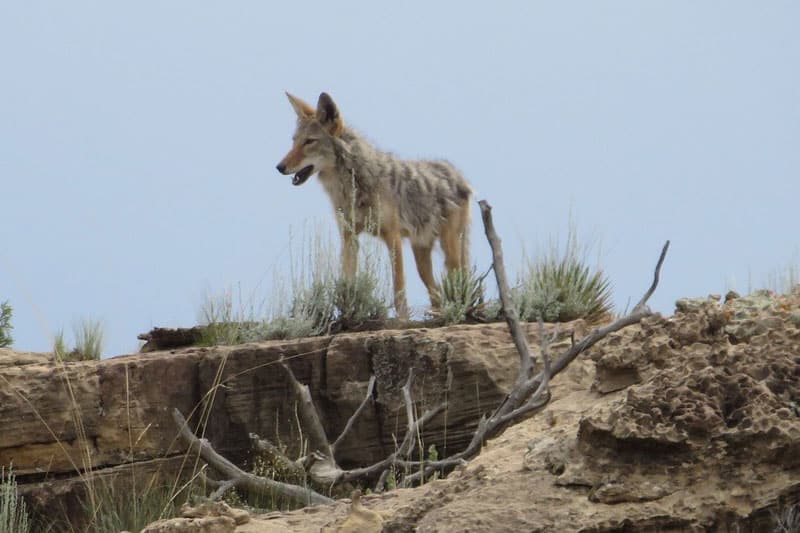 Coyotes are known to have a widely varying diet. Their diet consists of prey such as rodents, rabbits, fish, frogs, snacks, insects, and occasionally larger game such as deer. While coyotes’ diets appear to be mostly carnivorous, they are actually omnivores and will also eat fruit and grass.

Though they have been known to kill and eat livestock or pets, in urban areas, coyotes help control pests such as rodents and will even eat pet food or garbage.

Coyotes are native in California and were once found throughout the Bay Area and San Francisco. However, as the population began to rise and farms were more prominent in the area, people began killing coyotes en masse. The result was a population that dwindled to nearly nothing in the mid 20th century.

However, in the 21st century, the population began to thrive again. Urban parks, including Presido, Glen Canyon, and Golden Gate Park, began to foster a healthy population of coyote families. Now, the population exists at a static number in the dozens, though sightings have increased throughout the past two decades.

Since coyotes have always existed within California, they’ve adapted to thriving there. Between the pests and pets of the city and the wild game, they have a large food source. Nearly all predators – such as wolves and mountain lions – of the coyote have been removed from the northern parts of California as well, allowing their populations to grow without interference.

As a result, hunters and urban expansion in northern California and San Francisco are some of the only factors controlling the growth of the coyote population. 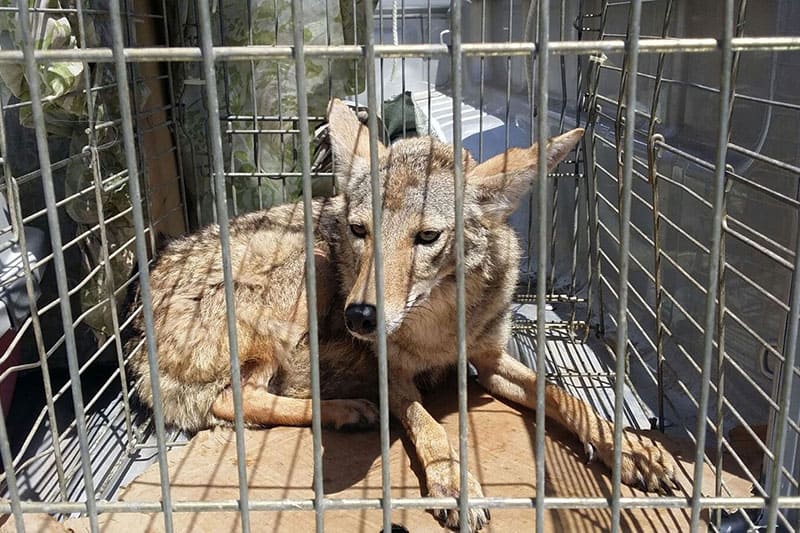 Since northern California, especially its major cities such as San Francisco and San Jose, are located in a more mountainous region, the areas are not as popular for a large population of coyotes. Coyotes prefer open flatland, as is abundant in the southern part of the state.

However, the loss of native habit in the wilderness of northern California has encouraged has encouraged the existing population to move in the cities, which between pets and their food as well as trash and human food, have provided the resources needed to support a substantial population.

This is considered one reason that, while coyotes have been remaking an appearance in the northernmost parts of the state, their population, while enduring, remains small.

A majority of southern California, including the area surrounding Los Angeles, consists of deserts. For reasons still unknown to most biologists and coyote specialists, all subspecies of coyote prefer open land over-covered, even sleeping above ground as opposed to dens. As a result, the open desert of southern California provides the perfect environment for coyote populations to thrive.

Southern California, excluding the urban areas, is also largely farmland. This abundance of livestock and pets provides a steady source of temptation and food for coyotes, encouraging them to form territories within the area.

However, coyotes are also often spotted within the city, especially Los Angeles. Here, they thrive on trash, pet food, and small animals. They’re most often found within the more natural areas within the city, such as cemeteries and parks, though they can be seen in the heart of the city where they are at risk of being hit by traffic. 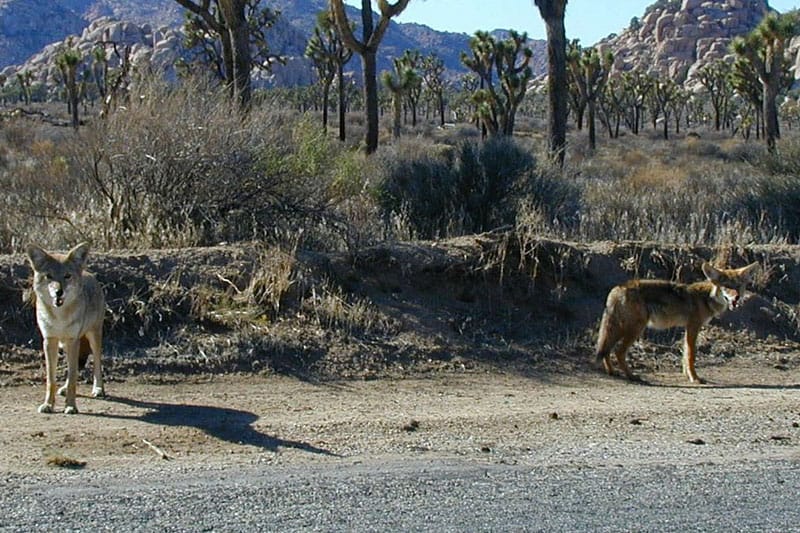 Studies on coyotes in southern California are abundant, with researchers using GPS collars as well as cameras to record information on them. Their diet is of interest, especially for those lone coyotes that manage to survive and thrive within the cityscapes.

Fecal analyses have shown that one reason coyotes continue to thrive within the urban areas of southern California is their eagerness to eat anything. From leather soles of shoes to pet food to trash to pets themselves, the coyote’s diet varies widely, allowing them to maintain their population even with scarce resources.

Coyotes are more of a problem in southern California than northern California. Population control through hunting and trapping is more widespread and advocated. However, scientists have shown that, other than the occasional incident with pets or humans, the coyotes are mostly harmless. This has encouraged more ethical methods, such as food source control, to become more popular.

For the most part, coyotes are generally harmless. However, they can be dangerous for livestock and pets, especially those left outside. Encounters with coyotes can also be dangerous for humans. For this reason it’s important to discourage them from appearing by your property though not feeding them.

Coyote attacks on people are extremely rare and are usually caused by misunderstanding. Attacks are often preventable with education about coyotes and their behaviors.

If they feel threatened, coyotes will kill dogs – as well as other pets left unattended outside at night.

Can you hunt and kill coyotes in California?

Due to a lack of protection, coyotes have the same legal status as rats and pigeons. This means that it can be killed any time of year without any limit on numbers. However, you cannot poison them.

You may also like:  Leopards vs. Cheetahs (8 Ways They're Different)

Can you eat coyotes?

Coyote meat is edible, though not common in recipes.

Are coyotes protected in California?

Coyotes are considered non-game animals in California, meaning they can legally be killed any time throughout the year.

How do you get rid of coyotes?

One of the best ways to get rid of coyotes is by removing anything that may tempt them into your yard. Bring your pets inside at night, and don’t feed them outside. You may find guard animals beneficial. Large, bulky dogs trained to tend to livestock help defend your livestock and pets while also helping to keep coyotes out of your yard.

While coyotes can be shot, they’re beneficial for the environment and pest control, so you may find it best to leave them be unless you or your animals are in danger.

Do coyotes howl or bark?

Coyotes have three distinct sounds that they use to communicate with each other: squeaks, distress calls, and howls. Barking is not commonly observed.

Coyotes can be active during the day or night, year-round. Sightings are most common around dusk or dawn.

Where do coyotes sleep?

For most of the year, coyotes sleep above ground either in the open or in the bush. However, when pups are born, coyotes will live in dens.