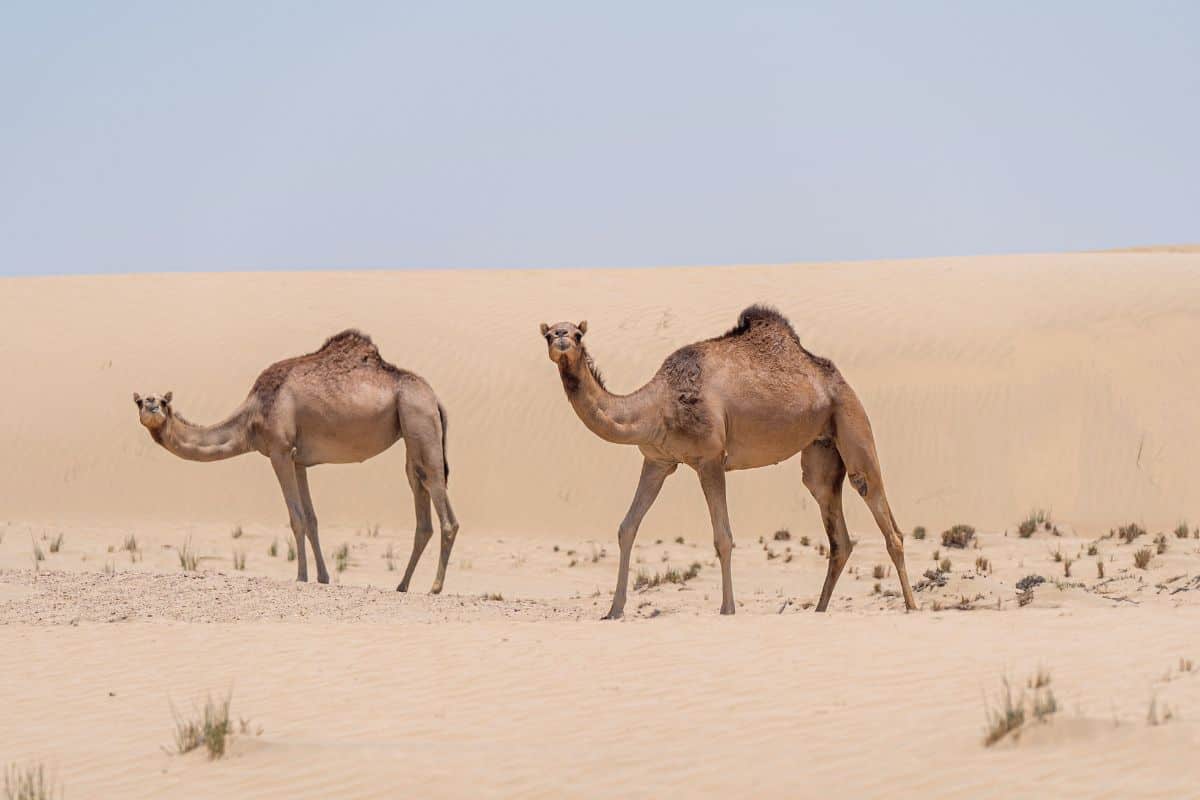 The camel’s body is built to withstand the difficult conditions of the desert. With extreme heat and minimum food and water resources, this animal is forced to adapt to its surroundings thousands of years ago. But how does a camel survive in the desert? Do camels eat cactus?

Camels, like the Arabian camel, can eat cacti thanks to their papillae that rotate and grinds the cactus. With their circular chewing motion, camels can turn the cacti, swallowing the thorns vertically to avoid the needles getting stuck in their throats.

Even though these animals get hurt by their sharp thorns, they still prefer to eat this succulent perennial plant thanks to its water, sugar, and nutrients.

The papillae inside their mouths allow them to control the food flowing towards the stomach. Since these animals have cone-shaped and raised papillae that act as their teeth, they can easily munch their way to a cactus without any problem.

Humans also have papillae. However, ours are located under our tongue and are much smaller than a camel. Instead of helping us chew our food, it contains over 100 taste buds allowing us to enjoy it.

Another reason why camels can quickly eat a cactus because they are ruminants. They are herbivores that get nutrients from the plants they eat by fermenting the food inside their stomach before they digest it.

A camel has a multi-chambered stomach that is home to billions of bacteria that helps them digest their food, including the thorns of a cactus.

Does It Hurt Camels to Eat Cactus?

Camels can get hurt and feel pain when they eat a cactus. However, because of their ability to adapt thousands of years ago, these animals can now bear the pain while eating a cactus. Additionally, their technique of turning the plant before they swallow reduces the pain that they feel when eating.

However, camels cannot avoid accidents when the side of their mouth gets poked by a thorn. When this happens, human intervention is needed, and it has to be forcefully removed, making it a lot more painful for the camel.

Why Do Camels Eat Cacti in the Desert?

Because of the harsh weather of the desert, camels could adapt to eat anything they could find, even if it was full of thorns. Aside from cacti, camels eat twigs, grasses, leaves, grains, herbs, shrubs, oats, and even certain tree parts.

Other Animals That Eat Cactus

Camels are not the only ones able to adapt to eating cacti. Here are other animals you’ll find capable of downing this succulent perennial plant.

Jackrabbits are notorious for eating only the base part of cacti because it’s the juiciest part. They also choose where to bite, targeting areas with little to no thorns.

Packrats are also known as wood rats or trade rats. You can’t mistake them for regular rats because they have large black eyes, large ears, and long tails. These rodents enjoy eating cacti; however, they are careful eaters that always try to avoid the thorns.

Compared to a regular squirrel, this rodent lives on the ground and enjoys eating the fruits and seeds of a cactus while also avoiding its thorns. They have varying colors, including reddish, dark brown, tawny, pale brown, gray, and olive.

You may also like:  Do Pigs Eat Humans? (Answered)

Other people call javelinas as collared peccary. These hoofed mammals have protruding, long, and sharp teeth, which enables them to eat cacti easily. Compared to the other animals and rodents, they enjoy eating the thorns and the prickly pear cactus.

These New World cottontails have a close resemblance to jackrabbits and also love eating the base area of the cacti. They get rid of the seeds through their feces.

Prairie dogs belong to the family of herbivorous rodents. All five species (Utah, Mexican, white-tailed, Gunnison’s, and black-tailed) turn to eat cactus when they can’t find any other food. They eat the flowers, fruits, and the base of the cacti.

This is the only animal that can eat the entire cacti without having any problems with its thorns and strong digestive system. Since it’s well-adapted, its technique uses its front foot pads to break down the large thorns before eating their way through their food.

The Gila woodpecker loves to eat cacti and insects. Aside from eating, it also uses the Saguaro cactus as its nest by making cavities using its pointed beaks. They will raise their young offspring here to avoid getting preyed on by predators.

Camels have adapted for thousands of years to survive in the extreme weather of the desert. They have papillae and a well-built digestive system that can break down cacti and their thorns. Although they get hurt eating this plant, they continue to do so because of the water, nutrients, and sugar it offers.