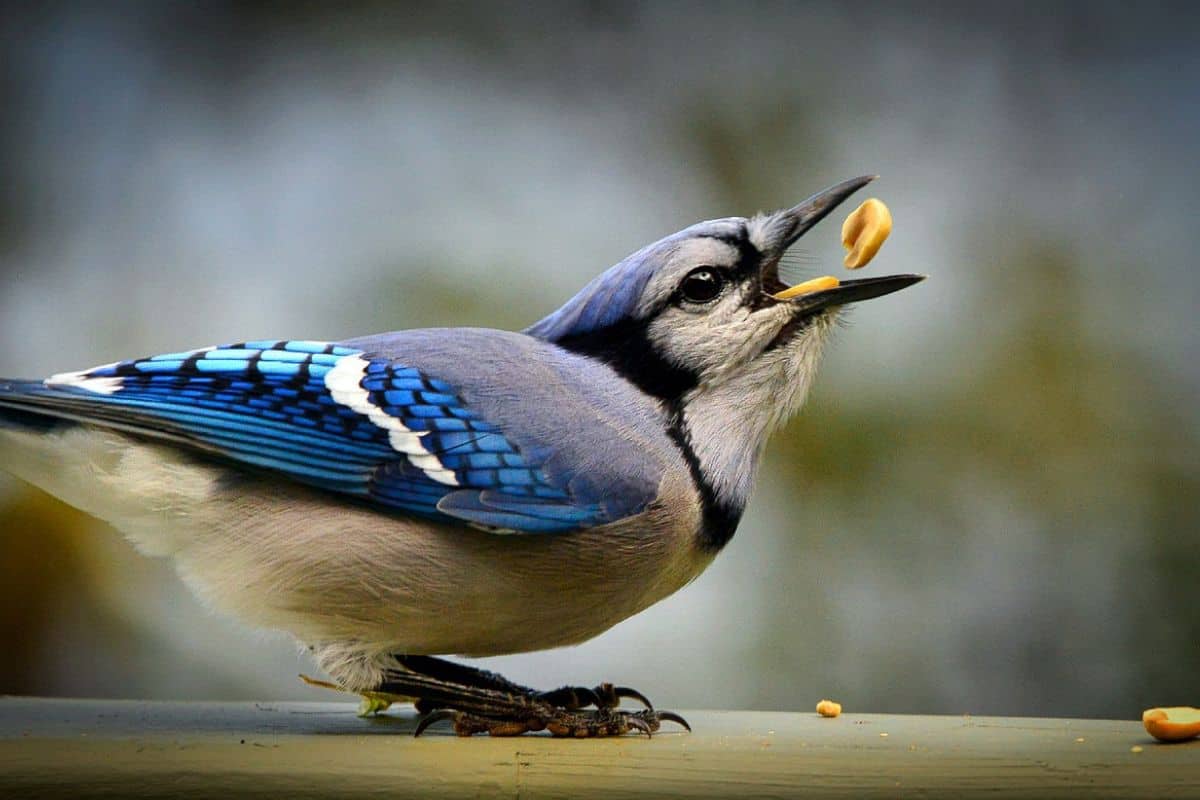 Blue is one of the most elegant and prominent colors on Earth, but finding animals that are blue in nature isn’t always an easy task. Some colors are common among animals because of their ability to produce pigments or absorb them from the food they consume.

In this article we look at 8 examples of animals that are blue or partially blue!

8 Animals That Are Blue

In the flora and fauna world, they can produce blue pigments because of the anthocyanin. Below is a list of animals that are blue.

The Blue Jay is a common backyard bird with beautiful blue feathers. and are known for their love of peanuts. The pigment in the Blue Jay feathers is melanin, which is brown. The blue color results from scattering light through the tiny air sacs on their feathers, making them appear blue.

However, since pigments do not cause the color, Blue Jay’s feathers could change color back to black or brown by altering their structure. Blue Jays are known for being an intelligent songbird with their perky crest and ability to mimic many calls.

Another blue animal is the Indian peafowl, a bird endemic to India. Peacocks are awed by humans because of their majestic and intricate bright feathers. Only the peacocks (male peafowls; peahens for female peafowl) have bright blue and green feathers, while peahens are brown and have a few green colors on their neck.

The blue coloration in the male peafowls is because of sexual selection. Brighter colored peacocks are more attractive and appealing to peahens and are likely to find mates.

The peacocks fan their iridescent tail feathers, known as trains signaling they are ready for matin. Before they rush to the peahens, shaking the trains to catch their attention.

However, like blue jays, peacock feathers contain melanin, and their blue color is derived from their structure. Their feathers have a crystalline lattice of microscopic rods that reflects the light causing them to appear blue—the same as their green color.

This next animal might not be familiar to you, but it does exist, and its color is blue! The Blue Glaucus is a tiny sea slug, often referred to as the Blue Dragon. It is an inch long and has flowing appendages around its body.

The Blue Glaucus can blend well with the ocean, known as countershading. It is usually back-floating because this is their defense mechanism against their predator. This cute animal is found in temperate and tropical waters in the Atlantic, Pacific, and Indian Oceans.

You may also like:  12 Animals With Long Teeth (Pictures)

It is a toxin that is poisonous and can be fatal when exposed to it. This phenomenon is known as aposematism and is caused by the structure of the frog’s skin cells. The frog’s skin has a layer of cells called xanthophores that produce yellow pigments, and the top layer of cells is called iridophores.

The Blue Poison Dart Frog has reduced xanthophores, producing no yellow pigments on its skin, making them blue. These poisonous frogs are found in Suriname and Northern Brazil. They got their name from frog hunters, who dip the tips of their darts in the poison to create a deadly weapon.

Although this animal species no longer lives in the wild, the Blue Spix Macaw is one of the world’s rarest macaws. It is a small yet elegant bird, dull blue with a faint green tinge on the breast and abdomen plumage. Last 2000, the Spix’s Macaw was declared extinct in the wild, and they are only a few held in captivity.

You might have seen this bird since it’s the main character in the movie Rio, bringing awareness that all parrot species are in danger. Spix’s Macaw is a social and intelligent bird that often flocks together from 10 to 30 birds.

Spix’s Macaw is endemic to Brazil, and they use their vocalization to communicate with their flock, mark territory and know one another. They are also popular because they can mimic human speech.

Remember that fish in Finding Nemo that has suffered from anterograde amnesia or short-term memory loss? You can remember her, for she is the only character with that deep blue color with a yellow tail and fin. The Royal Blue Tang is often referred to as surgeonfish.

It usually grows to the size of a human hand but can range from four to fourteen inches in length. Royal Blue Tang is native to Indo-Pacific coral reefs, and you can easily spot them because of their vibrant color. They are also one of the most common and popular marine aquarium fish worldwide.

Betta fish, or the Siamese fighting fish, comes in various colors. They make great pets, mostly due to their beautiful flowing fins. Only male bettas have flowing fins, while female bettas look like regular fish.

Bettas originate from Thailand and are called fighting fish because kids would catch these fish and put them together in one container to watch them fight. Through the years, more colors have been introduced and bred to create various colors.

Butterflies are one of the animals that gives you some magical feeling. They range in different patterns and colors— one of the most-sought butterfly colors is blue.

The Blue Morpho is known for its spectacular blue color on the top side of its wings. No, this isn’t because of the pigmentation but the configuration of their scales reflecting the light.

The Blue Morpho is one of the largest butterflies in the world, with a wing span of five to eight inches. For some species of morphos, male butterflies tend to be bluer compared to females; for several species, male butterflies are blue, while females have a brown or yellow hue.