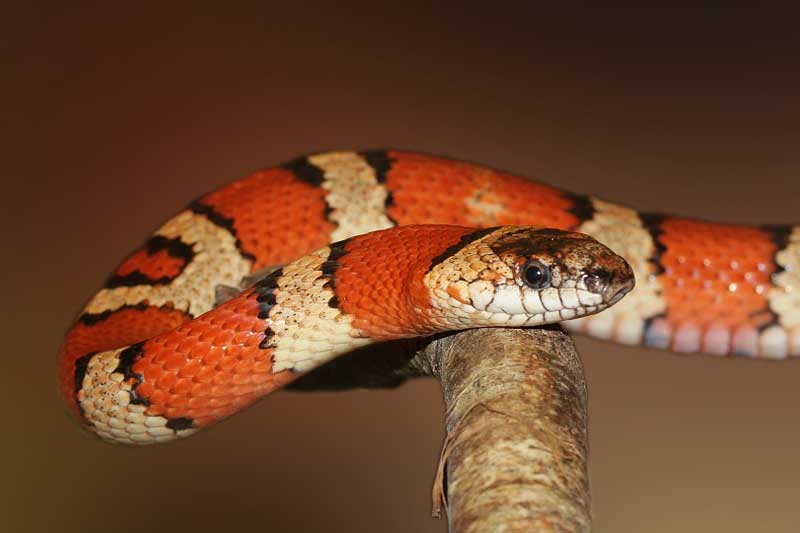 Out in the wild, animals have to adapt to different tactics to stay safe from predators or hunt for food. One of those methods is mimicry. Animals that use mimicry rely on similar characteristics to mimic another species. However, there are various ways they can do this, including:

In this article, we’ll go over 14 examples of animals that use various types of mimicry and explore how their tactic helps them survive in the wild. Read on to find out!

14 animals that use mimicry

Here is a list of 14 animal species that have mastered the art of mimicry and how it helped them stay safe or hunt.

Anglerfish are ambush predators that use their sandy brown and greenish bodies to camouflage by looking like sponges, rocks, or seaweed. They also dangle out a rodlike dorsal spine that glows, mimicking something attractive to lure in fish. Once the unsuspecting fish get close, they’ll snatch and eat their prey with their wide mouth and gruesome teeth.

The foureye butterflyfish is a light gray fish with yellow hues and yellow fins. They get their name from the large circular “eyespots” on their tails that they use to trick predators. When predators assume these are the fish’s real eyes, they believe the fish will escape tail first. However, the fish flees in the opposite direction.

As their name suggests, the dead leaf mantis is very good at acting like dead, decaying, or broken leaves. They vary in color from dark brown or mottled brown to a pale orangey-brown and have leaf-like patterns on their wings. Not only do they look like dead leaves, but the mantis will also sway and mimic the motions dead leaves make to complete their mimicry.

Katydids use two forms of mimicry to survive in the wild. Their bright green leaf-like color and shape help them blend into the vegetation and protect themselves from predators. They are also known to mimic the female calls of cicadas to lure in male cicadas seeking mates and eat them as food.

The lesser death’s-head hawkmoth uses mimicry to its advantage when hunting for food, especially honey from beehives. These moths have similar patterns to a bee but can also produce an odor that mimics the smell of honeybees. This allows them to enter a hive and eat honey without being attacked as an intruder. It’s also possible the squeaking sound they make is similar to a queen bee’s sound, so they are further protected while sneaking around hives.

Alligator snapping turtles are sneaky predators that lay at the bottom of rivers and lakes when hunting. With a rough, rocky appearance and algae growing on their backs, these turtles easily blend into river beds. They then open their mouth and stick out their thin pink tongue and wriggle it around. Their tongues look like worms to passing fish, but when a fish comes too close, the turtle snaps its jaws and captures the fish as food. 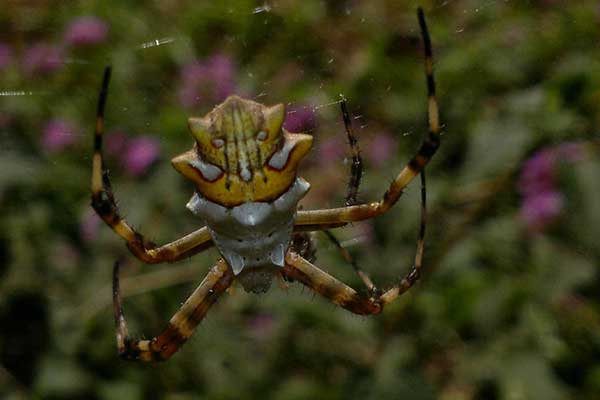 The silver argiope is an orb-weaver spider that uses its web to mimic different flower patterns when hunting for bees. They create webs with zigzags in the middle that can reflect ultraviolet light and appear like nectar guides. Its possible bees can remember web patterns, which is why these spiders are continuously spinning new webs.

The ant-mimicking jumping spider is known to mimic ants by walking in winding patterns similar to ants following pheromone trails. They will also lift their two front legs like ant antennae. They do this to convince predators they can create formic acid and that they taste unpleasant. When in reality, these spiders taste just fine and aren’t filled with chemicals.

One of our favorite types of animals that use mimicry to their advantage is the kingsnake. Kingsnakes have colorful yellow, black, and red bands, which are the same combination as coral snakes. The main difference is, coral snakes are poisonous. The nonvenomous kingsnake has evolved to mimic coral snakes and be left alone from predators that see the bright colors. Interestingly enough, coral snakes also sometimes attempt to mimic kingsnakes so other animals feel less threatened by their presence.

Baby copperhead snakes have yellow tails that they use to help them hunt. By wiggling their tails, so it looks like a caterpillar, they attract nearby prey to come closer. Once the prey, such as a frog, gets close enough, the copperhead will strike and capture their prey.

Gopher snakes are generally harmless, so they often shake their tail to mimic a venomous rattlesnake to confuse predators. Both animals look similar enough with dark markings on their backs and brownish yellowish, large heads. However, unlike rattlesnakes that strike with their mouths open, gopher snakes strike with closed mouths and use their blunt nose to attack animals they see as threats.

As their name suggests, the mimic octopus uses mimicry as a lifestyle. They often act like other animals to confuse their predators by holding their bodies in different shapes. For example, they’ll flatten themselves to look like a harmful sting ray or move their arms around to look like venomous sea snakes. Sometimes they even change their color to mimic lionfish.

Although they are powerful predators, the zone-tailed hawk will mimic less threatening turkey vultures when hunting for prey. Most animals don’t see vultures as a threat since they feed on weak or dead animals. So, to trick their prey into ignoring them, zone-tailed hawks will blend in with packs of vultures before a surprise attack to catch healthy animals.

You may also like:  10 Species of Wild Canines in North America