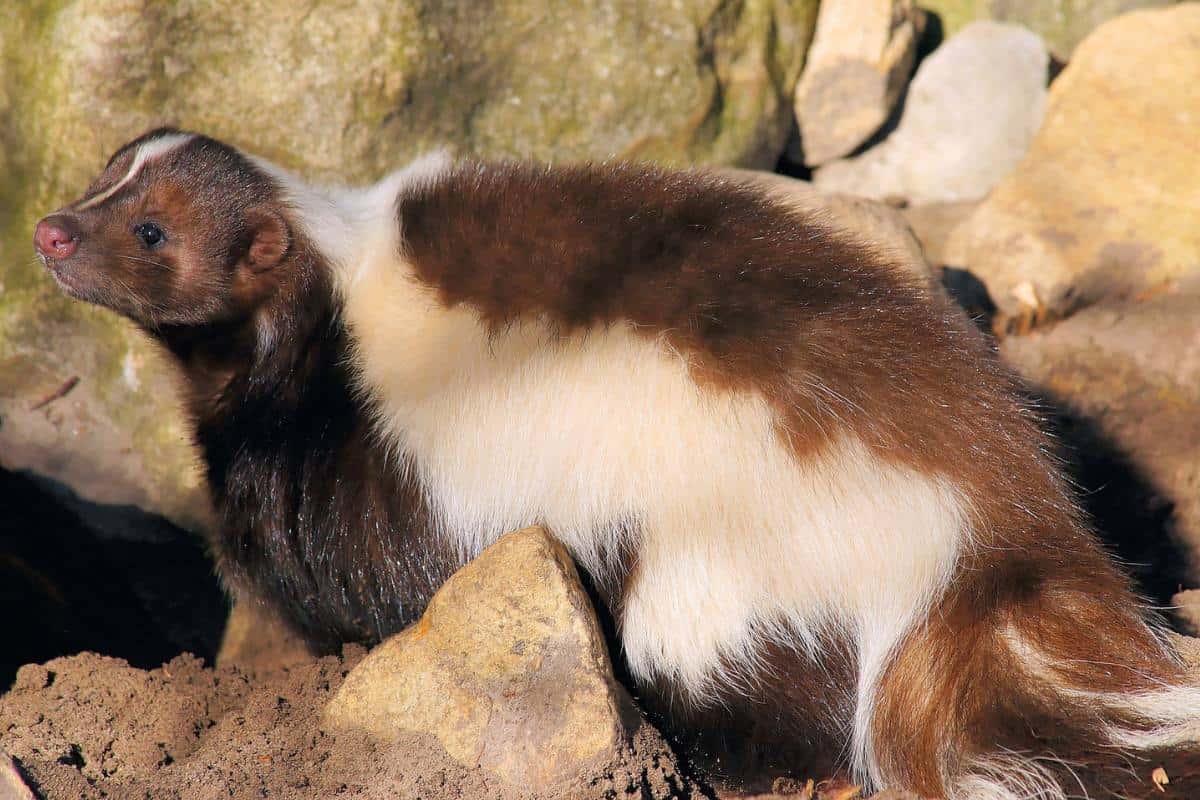 Skunks are some of the most unmistakable and iconic animals in nature. With their distinct black and white fur, pungent scent glands, and characteristic “handstands,” skunks are a sight to behold! But what else makes these creatures so special? In this article, we’ll explore 12 characteristics of skunks that make them so fascinating and unique.

A characteristic is an obvious feature of an animal, such as eye color or skin pigmentation. A trait is the specific variation of a characteristic that an individual animal exhibits, such as blue eyes or brown eyes. Some animal populations evolve over generations to exhibit one trait, in particular in order to survive.

This would be called an adaptation. For example, a population of animals may evolve so that the brown eye trait is dominant, because brown eyes may make this population less likely to be noticed by predators.

Skunks are well known for their distinct coats, which come in a variety of patterns and colors. The most typical color combination is black and white, but skunks can also have brown or cream-colored fur. Their markings can vary in color, ranging from white to yellowish or even reddish-brown.

Some skunks may have stripes that are almost invisible, while others may be more brightly colored with vibrant markings. Furthermore, the bright colors of a skunk’s fur help to warn potential predators of danger.

Skunks are easily recognized by their distinct black-and-white markings. They often have a thick stripe running along the middle of their back that may be solid or broken into spots with alternating patches of black and white fur on either side. These distinctive fur markings provide protection to the skunk from predators in its environment.

The stripes and spots on a skunk’s fur actually serve to break up its silhouette so that it is harder for predators to detect. Many skunks also have several thin, vertical stripes running down their sides and across their face.

Skunks are easily recognizable due to their distinct physical features. One of the most prominent characteristics of these animals is their elongated snouts; the long and narrow shape helps them sniff out prey, pick insects from the ground, or rummage through vegetation for food. This highly adapted feature also gives skunks an improved ability to detect potential danger.

Skunks are known for their unique warning display, which is used to ward off predators. When threatened, the skunk will raise its tail and stamp its feet.

Skunks have an effective defense mechanism that helps them to stay safe in their natural habitat. Their primary line of defense is their strong scent. Skunks can release a powerful and pungent spray from two glands located near the base of their tail when they feel threatened by predators.

The scent contains several chemicals, including thiols, which are very potent and can linger in the air for up to several days. This smell is very unpleasant and irritating, which helps to ward off potential predators.

You may also like:  How Strong Are Orangutans? (Examples & Stats)

Skunks are well-known for their powerful odor, but they also have some pretty impressive physical features. One of these is their strong claws that help them dig and climb. Skunks have five toes on each foot with long sharp claws that enable them to dig burrows, climb trees, and tear apart logs in search of insects.

Another unique feature of skunks is their ability to do a ‘handstand’. By pushing off with their hind legs, they can arch their backs and stand on their front paws.

This action helps them spray predators or intruders from greater distances. They typically perform the ‘handstand’ and look right at their intended target when spraying.

Skunks are nocturnal animals, meaning that they prefer to be active during the night. At night, skunks are able to forage for food and explore their environment without being disturbed. During the day they usually remain in their den or burrow until it becomes dark again.

Skunks have developed a genetic mutation that allows them to be unaffected by certain types of venomous snakes, such as rattlesnakes, copperheads, and cottonmouths. This trait has likely evolved as a way for skunks to protect themselves when they come across these dangerous predators in their environment.

Skunks are well-known for their ability to dig holes and burrows! These animals use their front feet and claws to dig up the earth and make dens in which to sleep, raise young, store food, or escape from predators. Skunks have been known to build elaborate systems of underground tunnels that span many yards.

In addition, some skunks dig up various insects to eat, such as ants and grubs. While skunks spend most of their time underground, they also enjoy basking in the sun during the day. Skunks are natural excavators and can transform a lawn or garden into a collection of holes in no time at all.

Skunks are solitary creatures by nature. They spend most of their time alone and only come together to mate or in the winter when groups of skunks tend to live together for warmth. After the kits are born, the females send the males away and raise the kits on their own until they are ready to live by themselves as well.