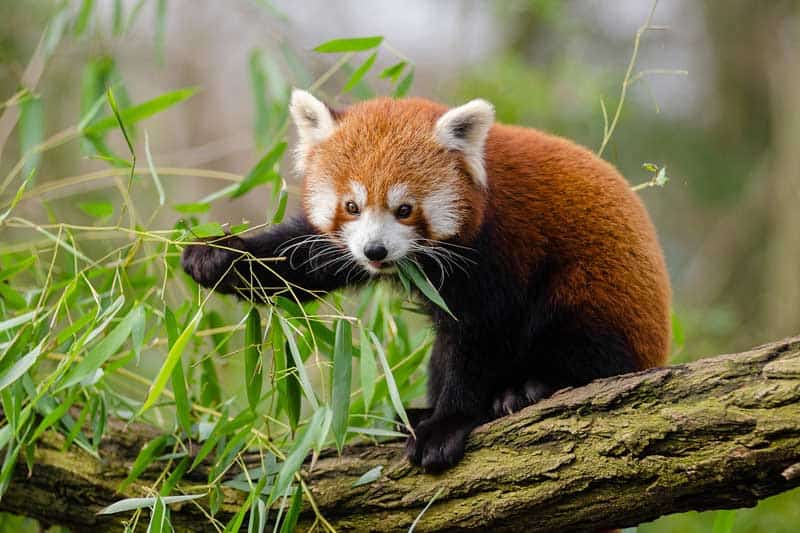 Are you looking to explore the wonders of nature? Then look no further than bamboo forests! These unique habitats host a variety of fascinating animals, including monkeys, pandas as small as raccoons, birds, and elephants that weigh up to 6 tons. In this animal list, we’ll take a closer look at some of the incredible animals that live in bamboo forests and learn about their unique adaptations.

13 Animals That Live In Bamboo Forests

In the following list we learn more about 13 animals that live in bamboo forests.

Red pandas are one of the main animals that inhabit bamboo forests. They are native to the Himalayas and southern China, but their range also extends into India, Nepal, and Bhutan. Red pandas have reddish-brown fur on their upper parts and whitish or grey fur on their lower parts.

On average, they are about the size of a housecat, measuring 20 to 26 inches in length and weighing up to 14 pounds. They have distinctive facial markings, long bushy tails, and paws with partially-opposable thumbs that help them climb trees. Red pandas primarily feed on bamboo shoots and leaves, but will also eat berries, fungi, roots, and eggs.

They are mainly solitary creatures that move around their home range in search of food sources. However, they do form bonds with other red pandas during mating season, which usually takes place in late winter or early spring.

Bamboo rats are a type of rodent that is native to areas with dense bamboo forests. They have thick fur and long tails, which they use to help them navigate through the tall stalks of bamboo.

They feed primarily on shoots, leaves, and roots of the plants in their environment. Bamboo rats can also be found eating insects and small animals. They are nocturnal and solitary animals, rarely seen in large groups.

Asian elephants are one of the most iconic animals that live in bamboo forests. They are found throughout India, Nepal, Bhutan, China, and Myanmar and can be seen living among tall bamboo trees.

These majestic creatures have been revered in Asia for centuries and are considered to be sacred animals by many cultures. Asian elephants are the largest land mammal in Asia, reaching up to 11 feet in height and weighing up to 5 tons.

Asian elephants are herbivores and their diet consists of grasses, leaves, tree bark, roots, and fruits. They spend most of the day foraging for food in bamboo forests, which makes them an important part of the ecosystem.

Asian elephants are social animals and they form strong bonds with family members. They also communicate with each other through a variety of sounds, including trumpeting and rumbling.

Bamboo Vipers are a species of venomous snake that lives in the tropical forests of Southeast Asia. They are usually found living in bamboo thickets, hence their name.

These vipers have a grayish-brown coloration and can reach up to 60 centimeters in length. Bamboo vipers have an elongated head with two large fangs that allow them to inject their venom into prey. They primarily feed on small mammals and lizards, but will also consume other snakes if given the opportunity.

Bamboo vipers are nocturnal creatures and will spend most of their day in hiding. They tend to be solitary animals, only coming together during the mating season.

Eastern gorillas are some of the most iconic animals that live in bamboo forests. Found only in African countries like Uganda, Congo, and Rwanda, they inhabit tropical rainforests and mountain bamboo forests.

These large primates typically have black fur with a white patch on their chest, although some may have reddish-brown fur. They can grow to be up to 6 feet tall and weigh upwards of 400 pounds.

Eastern gorillas are herbivorous, feeding primarily on leaves, stems, roots, shoots, bark, and fruit. They also occasionally eat ants and termites when they can find them. They spend most of their day foraging in the bamboo forests for food and shelter.

Giant forest hogs are a fascinating species of wild pig native to the bamboo forests of Central and East Africa. These impressive animals can reach up to 6 feet in length, with adults weighing up to 250 pounds!

They have coarse reddish-brown fur on their backs and sides, while their bellies and legs are covered in dark black fur. Giant forest hogs are also distinct because of their curved horns and long, tufted tails.

African elephants are one of the most iconic animals that live in bamboo forests. Native to Africa, these majestic creatures have long been an important symbol of wildlife conservation.

They are the world’s largest land animal, weighing up to 6 tons and growing as tall as 11 feet at the shoulder! African elephants prefer grassland habitats but are also found in some parts of the historic bamboo forests of Africa.

They feed on grasses and browse on leaves, shoots, bark, fruit, and flowers from trees. When food is scarce, they have also been observed eating small amounts of bamboo.

African elephants are highly social animals that live in close family groups led by older females known as “matriarchs.” They are a keystone species, meaning they play an important role in maintaining the health of their habitat.

Mountain bongos are a species of antelope that can be found inhabiting bamboo forests in the mountainous regions of Africa. These animals have adapted to their environment and have become experts at maneuvering through the dense forest terrain with ease.

Their reddish-brown coats provide camouflage from predators as they traverse terrain, and also help them blend in with the surrounding vegetation. Mountain bongos live in small herds of two to three individuals and graze on grass, leaves, stems, and fruits within their habitat. They can reach speeds up to 30 miles per hour when running from predators or when searching for food.

The Spotted Bamboowren is a species of bird found in the Atlantic Forest of Brazil. These small birds inhabit dense bamboo forests and have adapted to live among the tall stalks of their habitat. They are mostly brown or grey in color, with distinctive white spots on their wings and backs.

The Spotted Bamboowren feeds primarily on insects, but will also take fruit or nectar. They are arboreal birds that reside mainly in the upper canopy of bamboo forests, rarely going to lower levels. Their nests are constructed between branches of bamboo plants and are made out of bark and leaves.

The timber rattlesnake is typically around 2-3 feet long, with a thick body and a rattle on the end of its tail. It is grayish-brown in color, with a checkered pattern along its back and sides.

Bamboo lemurs, also known as gentle lemurs, are a species of primate native to Madagascar. They can be found living in bamboo forests all over the island and feed on bamboo shoots and leaves

Bamboo lemurs have distinctive long faces with large eyes and ears, which help them both locate food and detect any potential threats. They also have long, agile fingers and toes that allow them to reach the highest parts of the bamboo.

The bamboo foliage-gleaner is a species of bird found in the Amazon rainforest that specializes in living and foraging in dense bamboo thickets. It spends most of its time within the protective cover of these tall bamboo stands, searching for insects and fruit among the leaves.

The species is quite small, measuring about 16 to 18 cm in length. Its primary feathers are brownish-orange and its throat and upper breast a yellowish-green. The bamboo foliage-gleaner prefers secondary forests with plenty of dense vegetation, as well as stands of mature bamboo.

The giant panda is one of the most iconic animals that live in bamboo forests. Native to central-western and southwestern China, this species can only be found in a few mountain ranges.

Giant pandas have become symbols of conservation, due to their vulnerability as an endangered species. These large mammals are uniquely adapted for eating bamboo and spend the majority of their time foraging for this food source.

An adult giant panda can consume over 20kg of bamboo per day, making it one of the most voracious bamboo eaters in the animal kingdom. Its distinctive black and white coat helps it blend in with its natural environment, while also providing insulation from cold temperatures.