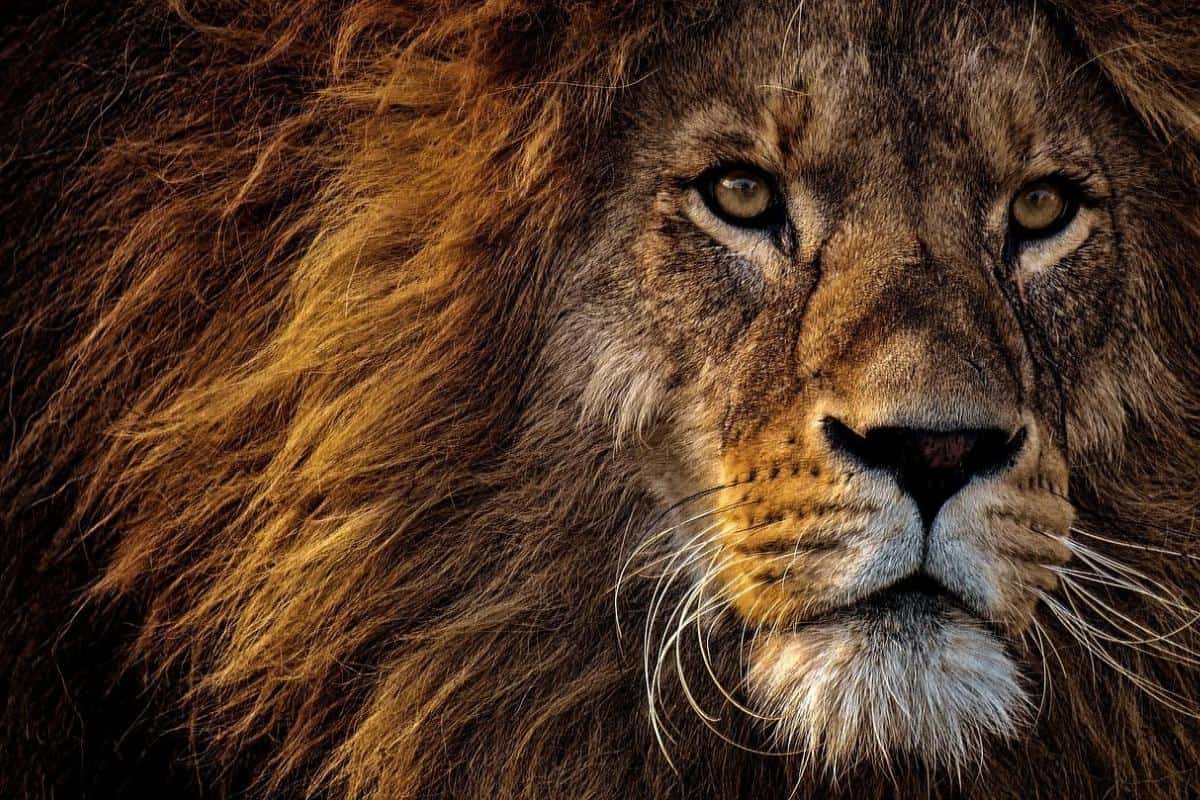 There are over 8.7 million animal species on the planet, with the majority of those species having a common name. Many of them have names that begin with the letter N, and there are also animals that end with N. Some of the species that fit this description will be discussed in this article, along with some interesting facts that’ll give you a peek into their world.

20 Animals that end with n

Bison is a large animal that you can find from Alaska to Mexico. They have shaggy coats ranging from brown to black and long horns used to protect themselves from predators.

As herbivores, bison eat grass, leaves, and twigs. Prairies, plains, and open grasslands with plenty of bushes for shade are also their preferred habitat. They’re known as North America’s largest mammal, weighing 2,000 pounds and growing up to 6 feet tall.

Sea lions are found on the coasts of North America, from Canada to Mexico. They’re most common along the coast and on sandy beaches, where they breed and give birth. When sea lions aren’t breeding, they spend most of their time at sea.

Sea lions live in groups called a herd, including hundreds of individuals. These animals primarily feed on fish, squid, octopus, and other aquatic animals.

Herons are large, wading birds with long legs and necks. Their beaks are long and pointed, and they’re usually gray in color. Except for Antarctica, herons can be found all over the world.

Their natural habitats include shallow ocean waters or ocean shorelines, lakes, rivers, marshes, and ponds. Herons eat fish and small animals caught with their bills or feet in the water. They have three times the vision of humans and can spot prey from a great distance.

Emperor penguins are the largest species of penguin. They can reach 4 feet in height and weigh up to 23 kilograms.

These penguins live in Antarctica’s coastal areas and are able to survive because they have a thick layer of scale-like feathers on their skin that protects them from the cold weather. These feathers are also water resistant. Emperor penguins hunt by diving into the ocean and swimming after their prey.

Swans are large waterbirds with long necks and graceful movements that swim on the surface of lakes and rivers. They’re also monogamous, and their relationship can last a lifetime.

They live in a wide range of habitats around the world but prefer open-water environments such as lakes, ponds, and rivers. These graceful birds also feed on aquatic plants, but will occasionally eat small insects found on the water.

The chicken is a domesticated bird that has been bred for meat and eggs and is one of the most common bird in the world. They’re omnivorous, meaning these creatures eat plants and animals, but their favorite foods are seeds, grains, and insects.

Their habitat includes open fields, dense forests, and urban areas. They’re typically social animals who live in flocks of up to 40 individuals. Some chickens have even been known to “adopt” other birds into their flock!

The prawn is a small crustacean found in the ocean. They can be found in rocky and sandy habitats, as well as at ocean depths of up to 400 meters. These omnivores consume plant matter, microorganisms, and decaying matter.

Prawns have a chitin-based exoskeleton that protects them from predators. Their bodies are typically blue-grey or nearly transparent in color. Prawns can grow to be up to 12 inches long, but most species are only about 3 inches long.

Dolphins are among the most intelligent marine mammals found in tropical waters around the world. They have sleek bodies with fins and flippers that allow them to swim quickly. Dolphins also have excellent hearing and vision, which aids them in finding food in the water.

These aquatic creatures consume fish and squid. As they hunt for food in the water, they can hold their breath for up to ten minutes. These animals are also social beings, living in groups known as pods.

The Emperor scorpion is one of the scorpion species commonly kept as pets, particularly by beginners. They can be found in Africa’s rainforests and savannahs.

This species will eat almost anything, including insects, spiders, and other arachnids. They’re known to be aggressive hunters and hunt primarily at night.

These scorpions can reach lengths of up to 9 inches and are usually black in color. These arachnids also glow a greeny blue color in the dark or under UV light.

Raccoons are a common animal in the United States and can be found all over North America. They’re nocturnal animals that live in forests, wetlands, and cities. Fruit and small animals such as mice, rats, and insects make up the majority of their diet.

These animals have a characteristic black “mask” around their eyes that helps them to blend into their surroundings at night. Raccoons live in hollow trees, logs, and crevices, as well as abandoned animal burrows.

The bearded dragon is a large lizard that is widely kept as a pet all over the world. They can be found throughout Australia’s arid regions. It lives in dry deserts, scrublands, and forests, and it’s a semi-arboreal creature that enjoys basking on fences, tables, and branches.

This omnivorous animal consumes both plant matter and meat. They can grow up to 24 inches in length and are known for waving their arms as a sign of recognition and submission.

The baboon is a large terrestrial monkey that lives in Africa’s savannas. They’re omnivores, eating mostly grasses, fruits, and small animals like birds. This species can reach a height of 2 feet and weigh up to 70 pounds or more.

These baboons live in troops, which can range in size from 15 to 150 individuals. Each troop typically has a few males, and the remainder of the members are females and their offspring.

Komodo dragons are the world’s largest lizards, with an average length of about 3 feet and a weight of about 150 pounds. They live on the Indonesian islands, in tropical rainforests with dense underbrush and plenty of water nearby.

These dragons are solitary creatures that spend the majority of their time hiding from predators in the underbrush of the forest and only come out to hunt. They’re opportunistic predators that’ll eat anything they can catch, including birds, mammals, and dead animals.

A lion is a large cat found in Africa, Europe, and Asia. It feeds on meat, such as gazelles, zebras, and wildebeest. Its natural habitats include grassland, savanna, and open woodland.

Male lions have a tawny or brownish mane that represents pride and sexual maturity. They have muscular bodies and powerful jaws, allowing them to hunt large prey such as buffalo or giraffes. They can reach a height of 4 feet and weigh up to 400 pounds.

Chameleons are reptiles found in Africa, Madagascar, and a few other tropical islands. They have a long tongue that they can use to catch their prey. These reptiles can also change color in response to their surroundings and can transform from green to brown, red, or yellow.

This animal hydrates itself from the water that drips from the leaves. Chameleons eat various insects, including grasshoppers, roaches, and crickets.

White pelicans are large birds found all over North America. They’re distinguished by their long, narrow bills that they use to catch fish.

These are migratory birds that spend their winters in Mexico, Central America, and California. However, species from Texas and Mexico don’t migrate. The diet of an American white pelican consists mostly of fish but may also include frogs or other small animals, such as clams or even small turtles, when food is scarce.

Water dragons are small lizards found in Australia and New Guinea. They’re semi-aquatic animals that live near bodies of water such as lakes and ponds. Their eggs are laid in sandy soils in shallow nests dug in sunny areas.

They can grow to be 3 feet long and feed primarily on fish and insects found near or on bodies of water such as lakes, ponds, rivers, or streams. Water dragons will occasionally consume vegetables and fruits.

The Robin is a small songbird native to North America. It’s one of North America’s most common passerines, or perching birds.

The feathers on this bird are gray or brown, with orange undersides and black heads. Since robins are territorial creatures, males are frequently heard singing the robin song to attract females or defend their territories. The breeding season results in the production of two to four blue eggs, which is unusual for birds.

Falcons are a type of bird known for their speed. As they dive for prey, they can reach speeds of nearly 200 miles per hour. Their diet includes ducklings, pigeons, and other species that live near water. Snakes, small rodents, and other small mammals are also consumed.

You may also like:  14 Examples of Animals With Webbed Feet (Pictures)

These birds of prey build their nests on high cliffs, usually near water, so they can see the ocean or river below. Every year, a single female lays one egg; both parents alternate incubating on the nest while the other hunts for food.

The sea dragon is a marine fish that lives in the oceans around Australia and New Zealand. They live in rocky reefs and seaweed beds, where they can blend in well.

These sea creatures are typically reddish with yellow and purple markings. They can resemble seaweeds floating in the ocean thanks to appendages that look similar to leaves and feed on small mysids found in their natural habitat.