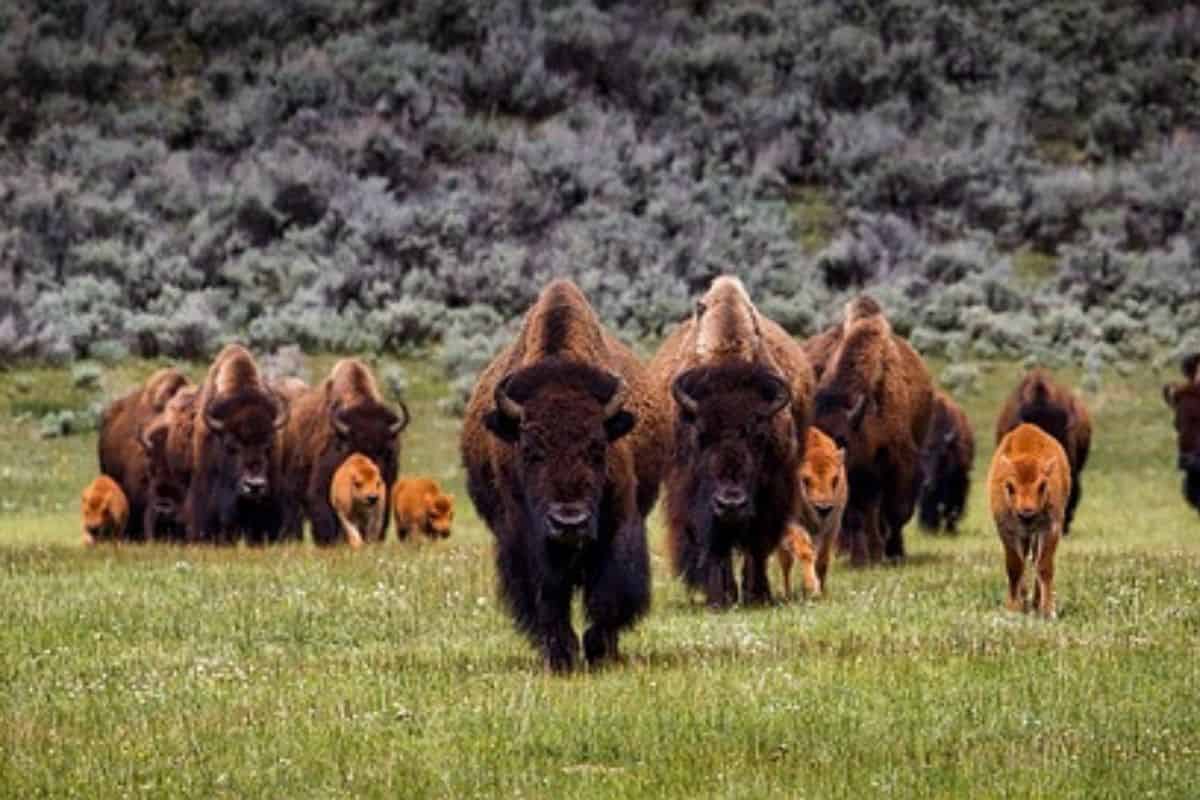 Today, most bison are found in National Parks, where they can be seen by visitors. Can tourists safely get close to bison, or do these animals pose a threat to humans?

Although bison may seem docile, they can become aggressive when people get too close, making them very dangerous. Bison can reach speeds of up to 35 miles per hour, allowing them to react quickly to threats. When attacking, a bison can gore a target with its horns, which can grow up to two feet.

Between 2005 and 2015, 25 people were injured by bison at Yellowstone National Park, which is home to the United States’ largest population of bison. In fact, bison are responsible for more injuries to humans than any other animal at Yellowstone. These attacks often occur when visitors try to get close to bison to take photos.

Typically, at least one bison attack is reported per year. In 2022, there were three people attacked by bison in a single month. The attacks began on May 31, when a 25-year-old woman was gored, leaving heard with puncture wounds. On June 27, a 34-year-old man had his arm injured by a charging bull, and on June 29, a 71-year-old woman was gored by a bison three times.

Has Anyone Been Killed By a Bison?

Even though bison attacks often result in serious injuries, they’re rarely fatal. As the largest land mammal in the United States, a bison is more than capable of killing a human. However, experts believe that bison attacks are usually a warning and that these animals don’t have the intent to kill.

With that said, there are records of fatal bison attacks. Between 1978 and 1992, there were 58 people attacked by bison at Yellowstone National Park, and two of those people died from their injuries. Most attack victims suffered goring wounds, abdominal injuries, and blunt trauma.

Some bison attacks have also been incorrectly posted as fatal. When a bison gored a woman in May 2022, some news outlets initially claimed that the woman had been killed. However, when the Eastern Idaho Regional Medical Center denied any recent patient deaths caused by a bison attack, the newspapers issued a retraction.

It’s rare for bison to attack other animals. Bison are herbivores that primarily eat grasses and leafy plants, which means they don’t need to kill animals for food. However, bison will attack animals if their herd is under threat.

Due to their size, it’s uncommon for predators to attack bison. Some animals, like grizzly bears and wolves, are capable of killing a single bison. However, when a bison is attacked by animals, the herd will usually stand together to drive the attackers off.

Bison have also attacked dogs that have gotten too close. In 2012, a bison charged a trapper’s dog team in Northern Alberta. It’s possible that the bison mistook the dogs for a pack of wolves. When around wild animals like bison, tourists should always keep dogs leashed and maintain a safe distance.

You may also like:  Are Groundhogs Nocturnal Or Diurnal?

How Close Can You Get to a Bison?

The National Parks Service recommends that visitors stay at least 25 feet away from bison at all times. When around these wild animals, it’s always best to play it safe and keep your distance.

While bison usually ignore humans, they’ll make eye contact with people if they’re bothered by their presence. If you see a bison looking at you, you should slowly back away. You should also move away from a bison raise its tail; this is a sign of annoyance.

Getting close to bison is always extremely dangerous, but it’s especially risky during bison mating season, which typically takes place from July to September. Bison may be more aggressive during this period. In the spring, when bison give birth, they may also chase away humans to protect their young.

Most bison live in North America, but another species known as European bison can be found in Northern Central Europe. These bison were once hunted to extinction in the wild but were reintroduced through captive breeding programs. The animal is the largest land mammal in Europe.

Like American bison, European bison have been known to attack humans. In 2020, a 61-year-old tourist was charged by a bison in Białowieża National Park and hospitalized for his injuries. Reports show that 84.5% of documented bison aggression towards humans in Europe happened because people got too close to the bison.

A bison can weigh as much as 2,200 pounds and can run at speeds as high as 35 miles per hour, making these mammals a force to be reckoned with. While bison won’t attack humans that keep a safe distance, these animals are known to charge at people who get too close.

Most bison attacks aren’t deadly, but they can leave victims with serious injuries. People should stay at least 25 feet away from wild bison and should always back away slowly if the animal shows signs of aggression. While bison might look gentle, it can attack quickly when it senses a threat.