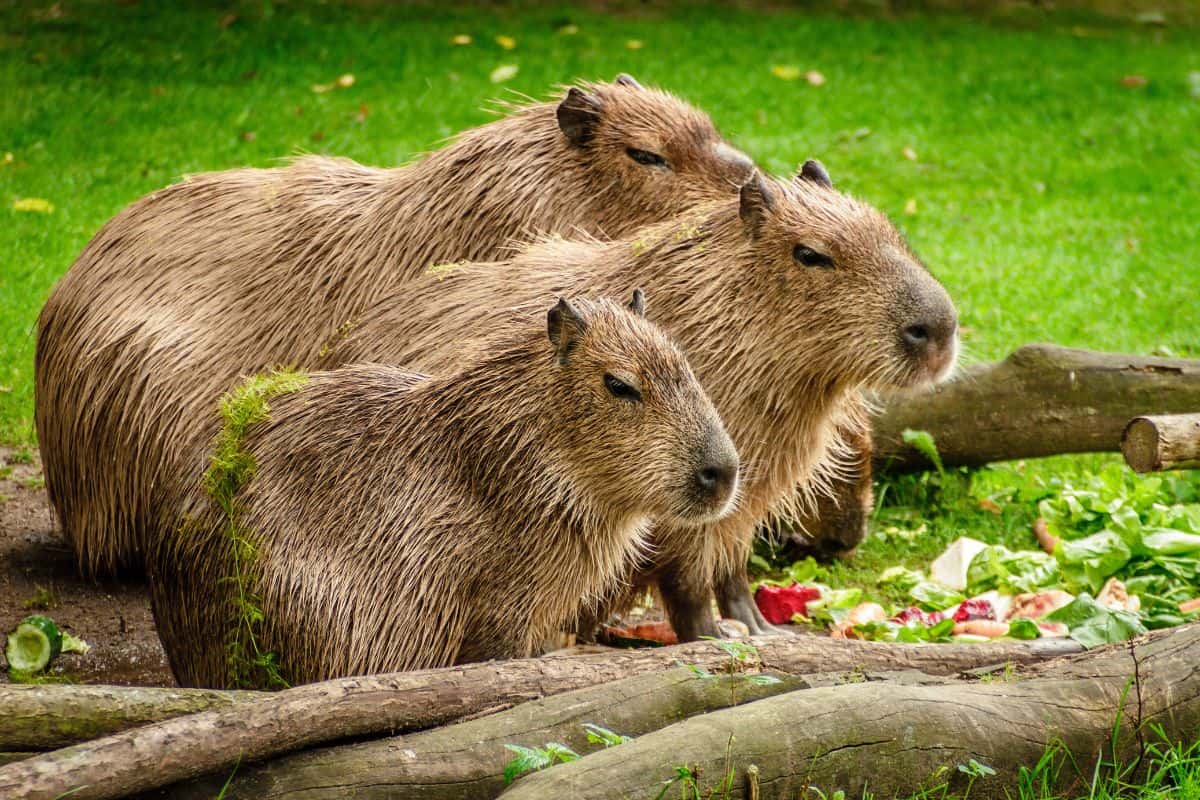 The capybara is native to South America and is the largest rodent in the entire world. An adult capybara is usually between 20 and 24 inches tall and has a stocky body that’s covered in brown fur. Other standout features of the capybara include its small, rounded ears and webbed feet!

Capybaras are a semi-aquatic mammal and spend the bulk of their time in or around the water. Not only do capybaras get their food from the water, but they can stay underwater for up to five minutes to hide from predators. While capybaras always stay close to the water, they sleep in large underground burrows.

The capybara is a very social animal and usually lives in groups of 10. It’s usually most active at dawn and dusk, but if it’s being threatened by predators, it can become nocturnal. Capybara are herbivores that mostly much on water plants.

With more than 1,500 living rodent species in the world today, there are quite a few animals that share traits with capybaras. These are some of the animals that are both similar to this massive rodent.

While capybaras live in South America, beavers are native to North America. These two animals may have different homes, but they both live near water and are some of the largest creatures in the rodent family. Like capybaras, beavers have webbed feet and brown fur. Beavers also have transparent eye membranes that help them see clearly while they’re underwater.

Why guinea pigs are like capybara: Guinea pigs and capybara are both part of the cavy family

The guinea pig and the capybara are very close relatives! Both animals are cavies, a group of herbivorous rodents that originated in South America. While the guinea pig once lived in the Andes mountain range, it has been domesticated and can no longer be found in the wild. The guinea pig only sleeps for short periods of time and can be awake for more than 20 hours each day.

Why porcupines are like capybara: Porcupines aren’t quite as big as capybaras, but they’re the third-largest living rodent

While some porcupine species are larger than others, they’re still one of the biggest rodents in the world today. Like capybaras, porcupines are excellent swimmers, and their hollow quills even help them to float!

Porcupines can be found on every continent except for Antarctica and are divided into two families: Old World and New World porcupines.

Why nutria are like capybara: Both animals are large, semi-aquatic rodents that live in burrows

With an average weight of 14 pounds, the nutria is much smaller than the capybara, but the two animals look similar thanks to their round ears and small eyes.

Nutria are native to South America, but can now be found in many parts of the world, including North America and Europe. They have webbed feet and are faster in the water than on land. Nutria also live in burrows or nests near the edges of bodies of water.

Why maras are like capybara: Mara look like rabbits, but they’re actually rodents that are closely related to capybara

Like capybara, maras are part of the cavy family. While both animals have stocky bodies, maras have long ears that make it look like a rabbit or hare.

It’s not unusual to see maras hopping or bouncing on all fours. Maras graze on vegetation and live in burrows underground.

The pacarana is a slow-moving, nocturnal rodent that is rarely seen in the wild. It is native to South America, where it makes its home in the rainforest and the Andes mountain region.

The pacarana is comfortable in the water and has even been seen bathing itself, earning it the nickname “shower rat.” Paracana are social animals and usually live in groups of four or five.

Why muskrats are like capybara: These large rodents both live along the water and feed on aquatic plants

Just like capybaras, muskrats are semi-aquatic rodents that get most of their food from the water. However, the muskrat isn’t picky and will eat just about anything if it’s hungry enough, including fish, snails, and even other muskrats.

Every day, a muskrat eats around one-third of its weight in food. The muskrat builds its nest in tree stumps close to bodies of water.

Why groundhogs are like capybara: Both of these animals have large front teeth that help them chew through plants

Capybaras and groundhogs have very similar teeth, including long incisor teeth they use to chew through plants and wood. Groundhogs are a large rodent that uses its sharp claws to dig underground burrows.

It’s a herbivorous animal that can be found throughout North America. A groundhog can eat up to a pound of food in one sitting and uses its fat stores to hibernate during the winter.

Why hutia are like capybara: The hutia is a cavy-like rodent that closely resembles the capybara

The hutia is a moderately large rodent that looks like it could be a member of the cavy family. Hutia are found in the Carribean and are the only native land mammal in the Bahamas.

Some species of hutia are arboreal, but others are like capybara and spend most of their time near the water. Unfortunately, around one-third of all hutia species are extinct.

Why gophers are like capybara: These animals are both burrowing rodents with sharp claws and teeth

Like capybara, gophers have sharp claws that they can use to dig burrows underground. There are 34 species of gopher in total, which are all found in North America.

Gophers can thrive in many habitats, but they prefer to be close to the water where the soil is moist. The gopher is a strict herbivore that can eat up to 60% of its body weight per day.

Why water voles are like capybara: Both animals are semi-aquatic rodents with round, fuzzy ears

Water voles and capybara both have blunt muzzles, small black eyes, and round ears. While a capybara’s ears are easy to spot, a water vole’s ears are so tiny that they’re hard to see!

The water vole makes its home along rivers and streams, where it has easy access to grasses and marine vegetation. Water voles are native to England and are considered to be an endangered species.

Why pacas are like capybara: The two animals are closely related and have similar features

Pacas measure between 24 and 31 inches long and weigh anywhere from 11 to 29 pounds. While pacas and capybaras look very similar, some paca species have spotted coats.

The paca is usually nocturnal, but it is sometimes more active around dusk or dawn. It can be very aggressive towards other animals, including other pacas.

Why gundi are like capybara: Similar to capybara, gundi have stocky bodies and rounded ears

The gundi is a small rodent, but like the capybara, it’s a strict herbivore that has round ears and a stocky, barrel-shaped body. Even though gundi have short legs, they can move fairly quickly and are able to climb rocks with the help of their sharp claws.

Some gundis have short tails similar to a guinea pig’s, but other species have large tails that look like a fan. A gundi may use its tail to assert dominance or attract mates.

Why agouti are like capybara: The agouti is a South American rodent with a round body and small ears and eyes

The agouti can be found in South America, where it plays the role of an accidental gardener. This rodent likes to eat nuts and seeds and often buries them to save for later, allowing new plants to grow.

An agouti can grow to be more than two feet long and typically weighs around 13 pounds. When an agouti is scared, it makes a sharp yell that sounds a little like a dog’s bark!

Why sea otters are like capybara: These animals are both semi-aquatic and have webbed feet

Sea otters are weasels, not rodents, but they still share many traits with capybaras. These keystone species have webbed feet that help them swim and spend most of their time in the water.

The sea otter is a carnivore and actually eats animals that feed on the sea grass that capybaras eat! While sea otters can walk on land, it’s not unusual for this mammal to spend its entire life in the water.