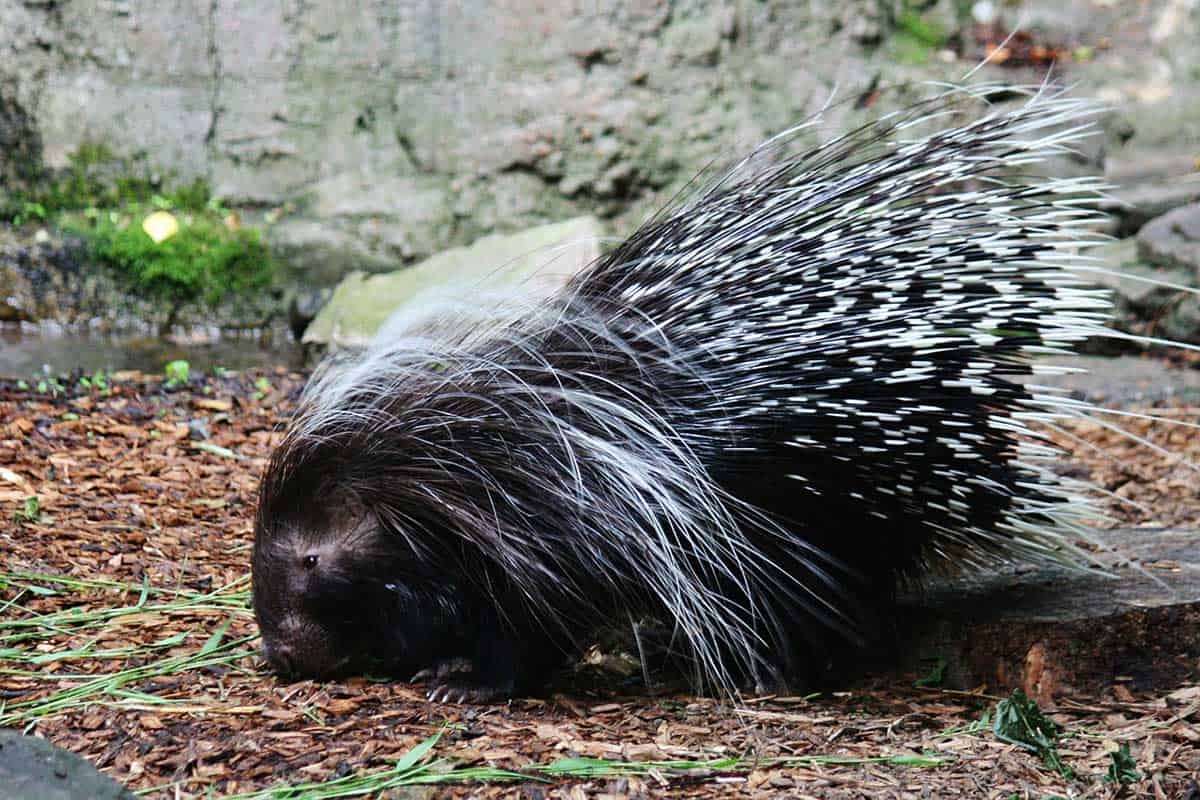 Porcupines may look sweet and harmless when you see a cute picture of them, but if you encounter one in the wild you’re likely to be wondering if they are able to shoot their quills and how far back you should get to avoid getting hit with one.

Can porcupines shoot their quills?

Porcupines can’t shoot their quills like arrows over long distances, or aim them at a particular target like another animal or a human that gets too close. However, if a porcupine feels threatened, the animal will expose its quills as a method of protection and defense.

An average porcupine can have up to 30,000 quills on its body, with the largest and longest ones typically found on the surface of the tail. Once the animal feels threatened and the quills are exposed, it only takes a soft touch for them to detach and end up in the skin of a predator. They are so sharp at the tips that they can easily get stuck if touched directly.

This is why many times, other animals who attempt to attack them are seen leaving an encounter with a porcupine with quills in their skin. Removing these quills is a painful process that deters many attackers from wanting to hunt a porcupine ever again.

Can Any Animal Shoot Their Quills?

There are no animals that are able to shoot quills as depicted in the movies or cartoons you may have seen when you were younger. Not many animals besides hedgehogs, echidnas and porcupines have quills, though there are many varieties of these animals all over the world. In particular, porcupines are divided into two distinct kinds based on specific criteria.

The old world porcupines inhabit Europe and Asia while the new world porcupines are found in North and South America. Quills are a formidable defense against attacks, but they are not arrows and can’t be shot.

Hedgehogs also have quills that are similar to the ones found on a porcupine, but they are also not able to shoot them. When threatened, a hedgehog will act much like a porcupine and straighten out the quills to deter attackers from touching it.

How Do Porcupines Attack?

Porcupines will generally only attack as a means of defense, to get a predator away from them or loosen the grip of a threatening animal. In these instances, the porcupine will swing it’s tail in order to try and hit the predator with the sharp points of its quills.

Each of the quills also has a barb, making the little spikes difficult and painful to remove.  Porcupines will also charge at a predator backwards, hoping to catch them with some spiky quills located on the surface of the porcupine’s back.  It’s rare for a porcupine to attack a human, but if you try to get close to it, it may try to defend itself as any wild animal would.

You may also like:  13 Examples of Animals That Hunt at Night (with Pictures)

Does it Hurt a Porcupine to Lose Its Quills?

Porcupines are born with quills, though they are not tough and spiky until the porcupine is at least a few months old. They lose their quills often in life, and can easily grow new ones in their place, just as humans lose hair on a daily basis and grow more in its place.

The quills on a porcupine are similar to its hair or fur, and are made out of keratin. This substance is also found in human hair and nails, and gives the follicle structure and strength. When a porcupine’s quills are exposed, they are still connected to the porcupine’s body, but the hold they have is easily broken by contact with another surface.

They can also fall off if the porcupine shakes its body vigorously, goes for a swim, or falls out of a tree. If they are not used to deter a predator, quills are lost during a normal shedding process. Much like a dog or cat sheds its fur seasonally, the porcupine also sheds quills at regular intervals to make room for new ones. For these reasons, scientists believe that it does not hurt the porcupine to lose its quills.

Porcupines can’t shoot their quills at you, but they can still be dangerous if you encounter them in the wild, just like any undomesticated animal. With a swing of the tail they can leave their barbed quills under the surface of your skin, making a painful removal necessary. It’s wise to give them plenty of distance in the wild to avoid any chance of those quills coming up.

We learned in this article that while porcupines can’t actually shoot their quills like darts or arrows, they can detach them from their bodies at will. This is what makes porcupines such difficult prey for predators.

If a jaguar or some other large predator merely brushes agains a porcupines quills, they are left with a face-full of spikes lodged in their skin and are pretty much instantly out of commission. For an animal like this to go after a porcupine even knowing the danger, you can bet that food is scarce and the porcupine is a last ditch effort to get some food in their bellies.