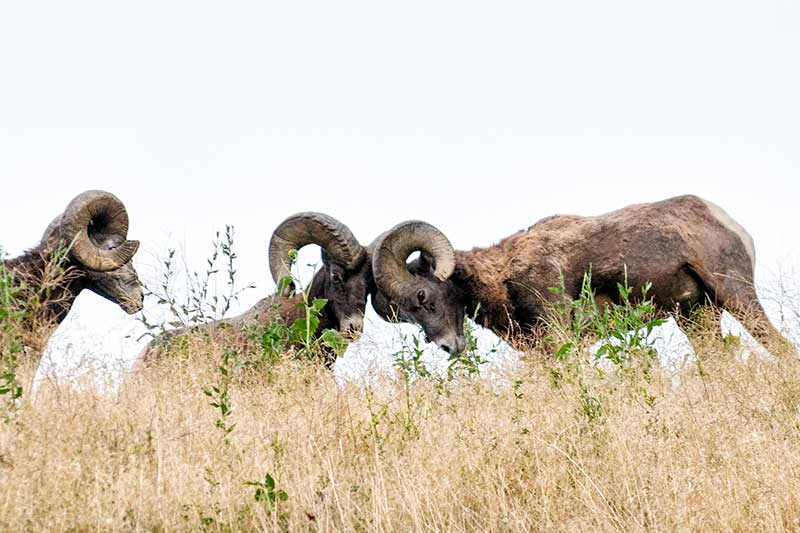 Most species have a defense mechanism of some sort, whether it’s for fighting or running away from threats. Many prey species choose flight while more dominant animals or predators decide to fight. Rams will begin using their large and often curly horns to headbutt each other when they’re young and beginning to follow their instincts. This article will explain why rams headbutt, and give some interesting facts about this unique behavior.

Why do rams headbutt?

The main reason that rams headbutt each other is to show dominance. This instinctive dominance behavior is often observed in young males trying to assert themselves. However, when seen in very young rams, the individual may simply be testing out the motion or practicing in a way.

As the ram ages, they will often headbutt more when they encounter an unfamiliar individual, which is normal. This is typical of male animals trying to prove that they are alpha right away in a relationship. This establishes hierarchy early on and, if effective, will reduce headbutting with that individual later.

If you have several rams in one general area, expect an increase in the behavior around high competition times. When testosterone is peaked, rams will become more aggressive and begin headbutting more frequently. A typical time to see this is during breeding season, when males are competing for the attention of the ewes.

Headbutting is a normal behavior; however, this can become abnormal if your ram starts to headbutt inanimate objects like fences or walls. Sheep should never headbutt anything besides other animals, and if they are, this might be a sign that they’re bored. If you’re managing captive rams and begin seeing this, consider adding more enrichment into the animal’s life.

This may mean housing them with another individual so they can socialize, giving them a bigger enclosure or outdoor access, or mixing up their daily routine. This can improve the animal’s welfare and prevent serious injuries.

While there are plenty of wild rams out there, many are also kept in a domesticated capacity. But these animals are not to be treated like pets. Rams will headbutt almost any animal, including humans. If you introduce a ram to a dog, cat, cow, etc., they are likely to headbutt them as well. This is a natural tendency of the animal. However, when it comes to headbutting humans, things can get dangerous.

Rams are powerful and their large horns act as weapons that can cause injury. Additionally, rams are fast and can headbutt you quickly while you have your guard down. If you take your eyes off them and they knock you down, you may sustain serious injuries.

It’s imperative to prevent headbutting humans from developing rather than relying on training the behavior out. Often once a ram starts headbutting a human, it’s tough to get them to stop. You can reduce the chances of this happening by avoiding close contact with the animal and ensuring you’re not in unprotected contact with him.

If the headbutting has already started and you’re worried about the frequency or aggressiveness of the headbutts coming from your ram, you can increase your safety in a few ways. It’s vital to show your ram from a young age that you’re the dominant animal in the relationship.

You may also like:  Mammals That Lay Eggs (5 Species)

If they see this from the time they’re young, they are less likely to challenge you when they get older. Regardless of the route you decide on, implementing a ram shield can greatly increase safety.

For your safety and the other animals around your ram, you can fit him for a ram shield. This is simply a device that blocks the ram’s forward vision so that they cannot see you. Ram blockers are often made out of leather and do not hurt the animal. Keep in mind the shield does not block side vision, and therefore, if you’re standing next to the animal, they will see you.

However, this is a safe way to ensure if you’re approaching the animal head-on that they won’t charge at you and potentially headbutt. This can also reduce headbutting of other animals, such as any other sheep the ram is housed with in the same coral.

Before using a ram shield, ensure your gates and fences are built in such a way that your ram cannot get stuck on anything. This could cause more aggression due to the stress and potential injury of being stuck.

Often headbutting will increase when two rams are living together. They’ll likely fight if they cannot separate themselves from the other animal with a barrier. Depending on the nature of the headbutting, this can result in injury.

If you’re moving two rams into a coral together and they begin headbutting a lot, this may be a sign that they need a slower introduction. Try separating them and introducing the pair with a barrier between them. Once they’re comfortable with the border between them, introduce them in the same coral for a limited period. Separate them at night, so they continue having their own space. As the introduction starts getting less aggressive, you can increase the amount of time they’re living together.

Eventually, you will likely be able to keep the two males together without so much headbutting. Expect they will still headbutt during more competitive seasons; however, they should not be injuring each other.

Ewes are female sheep, and they too will headbutt on occasion. While it is not as typical of a behavior to see, they will utilize their head when needed. It’s not abnormal to see a ewe headbutt a lamb trying to nurse if she is not in the mood for it to nurse or if it isn’t her lamb.

Ewes will sometimes headbutt rams, too, if they’re being overly aggressive and she feels she needs to stand her ground. While this is not as common as seeing two males headbutting each other, do not be alarmed to see an ewe headbutting. It is not an abnormal display and does not mean something is wrong with the animal.

A rams brain is well-protected from the sudden explosions of force that occur when they headbutt each other. Because of their extra protection they’re able to perform these displays of dominance with little risk of a concussion or injury. The bighorn sheep with its massive horns is believed to withstand more than 800 pounds of force from said headbutt!