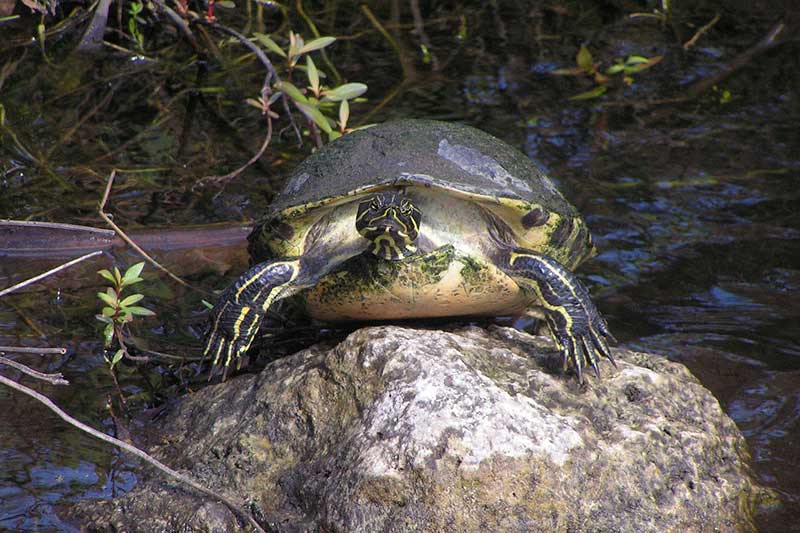 It may not be as common to find Y at the beginning of animal names as it is with other letters. However, there are plenty of animals that start with Y, like the yellow-bellied slider pictured above. Most of the time the common names refer to the animal’s color or their native location. Read on to learn some interesting facts about 18 animals starting with Y.

18 animals that start with the letter Y

From a common backyard species to one that lives up to 150 years, let’s find out more about 18 interesting North American animals starting with Y.

The Yuma myotis is a small insect-eating bat that grows under 2 inches in body length, with 9.4-inch wingspans. You can find them in western Canada, U.S., and Mexico.

They prefer low-elevation habitats, such as arid grasslands, coastal forests, and Douglas-fir forests. While they typically roost in hollow tree cavities, you can also find them in attics, mines, caves, and underneath bridges.

True to their name, yellow-bellied sea snakes are black or dark brown with yellow undersides. Sometimes they are also fully yellow or yellow with a black stripe on their back.

Their bright color is a warning of their neurotoxic venom that will shut down your nervous system if bitten. They live in marine environments throughout the Pacific and Indian Oceans, including southern California. They are also the only sea snakes to reach the Hawaiian Islands.

Yucatan nightjars are around 10 inches long with brown to grayish brown wings and tawny spots. They have a loud, clear song that sounds like a “puc weeu wee-weeeu.”

Native to Mexico’s Yucatan Peninsula, they live in mangroves, freshwater swamps, and deciduous woodlands. These birds are nocturnal, hunting for flying insects in their habitat.

Yellow-pine chipmunks have cinnamon fur mixed with dark and reddish colors and dark and light stripes. Their range is in the western part of the U.S. and Canada.

They live in burrows to hide from predators and store their seeds for hibernation. However, they also eat bird eggs, insects, and fungi.

Yellow-bellied marmots have brownish coats, yellow bellies, and white spots between their eyes. They are native to southwestern Canada and parts of the western U.S., including the Sierra Nevada and Rockies.

Unlike most marmots that live in burrows, they live in open dwellings, including alpine slopes, meadows, and steppes. However, they will hibernate in burrows during the winter.

Yellow-faced pocket gophers have yellowish-brown fur, short tails, and a deep groove on each upper incisor. They live in burrow systems in shortgrass prairies in northern Mexico and the southwestern U.S.

Their preferred habitat is silty or deep sandy soils free from rocks. These gophers are also the largest gophers in Kansas, growing around 7 inches long.

As their name suggests, Yucatan squirrels are native to the lowlands of the Yucatán Peninsula in Mexico. You can find them active during the day in trees of pine-oak woodlands and deciduous or evergreen forests.

You may also like:  11 Examples of Animals That Eat Snakes (Pictures)

Yellow mud turtles are olive-colored turtles with yellow around their throat, neck, and head. These aquatic turtles will forage for food both in the water and on land.

Yellow-blotched map turtles, also called yellow-blotched sawbacks, get their name from the serrated ridges protruding from the middle of their shell. They are olive to dark brown with yellow blotches and black patterns.

You can only find them in the Pascagoula River system of Mississippi, including the Escatawpa, Leaf, and Chickasawhay rivers.

Yellow-breasted crakes are small yellowish-brown birds with white and dark streaks on their wings and around their eyes. They grow between 4 to 5.5 inches long.

These birds live from Mexico to Argentina in freshwater marshes, rice fields, and borders of lakes or ponds. Their nests with clutches of 3 to 5 eggs can be seen on floating plants or attached to them.

You can find these spiders throughout the U.S., in southern Canada, and south into Mexico. However, they prefer lower elevations, such as grasslands, farmland, meadows, and swamps. They are also very common in backyard gardens.

Yarrow’s spiny lizards are blue, copper, pink, or green with a crosshatch pattern on their body. You can find these lizards in five Mexican states and the states of Arizona and New Mexico in the U.S.

They are common on the peaks of the Sky Islands in Arizona but don’t migrate down to areas between the peaks. Since they live in seasonally cold climates, they are known to give birth to live young.

Yellow-backed spiny lizards are large and stocky, have spiny scales, and grow up to 5.5 inches in body length with slightly longer tails. You can find these lizards in California, Utah, Arizona, and Nevada.

While they are native to desert habitats of the Mojave and Great Basin deserts, they also live in low mountain slopes, riparian woods, and urban areas.

Yellow-billed loons are black all over with white spots and a yellow bill. They are the largest of the loon family, growing 30 to 38 inches long with wingspans of 53 to 63 inches.

They breed in high arctic tundra habitats on large lakes and along the coasts of the Arctic Ocean in northern Canada and Alaska.

Yellowfin tunas are highly migratory fish, found in tropical and subtropical waters worldwide, except the Mediterranean Sea. They can get quite large, growing up to 20.5 inches long and weighing around 400 pounds.

Yelloweye rockfish are brightly colored orange-yellow to orange-red fish with yellow eyes. Although they only remain around 3 feet long, these fish can live up to 150 years.

You can find them along North America’s western coast, from the Aleutian Islands in Alaska to the Baja Peninsula. They prefer steep rocky areas underwater where they can find shelter in the nooks and crannies.

Yosemite toads are greenish-brown or yellowish-green, with females having black spots edged with white or cream. They are native to the Sierra Nevada Mountains in California, living along bodies of water and in wet meadows and forests.

These toads are most active during the day, basking in the sun. During the winter, they go into a state of hibernation in dense foliage or rodent burrows.

This small yellow bird is just a bit larger than the American goldfinch, around the size of a sparrow. They can be found throughout North America, Central America, and northern South America. They typically winter in South and Central America and migrate into North America for breeding.

Yellow warblers feed primarily on insects so they don’t visit backyard bird feeders, though keep an eye out for them in if you’re out in the woods. They are one of fifty species of warblers found in the North America.