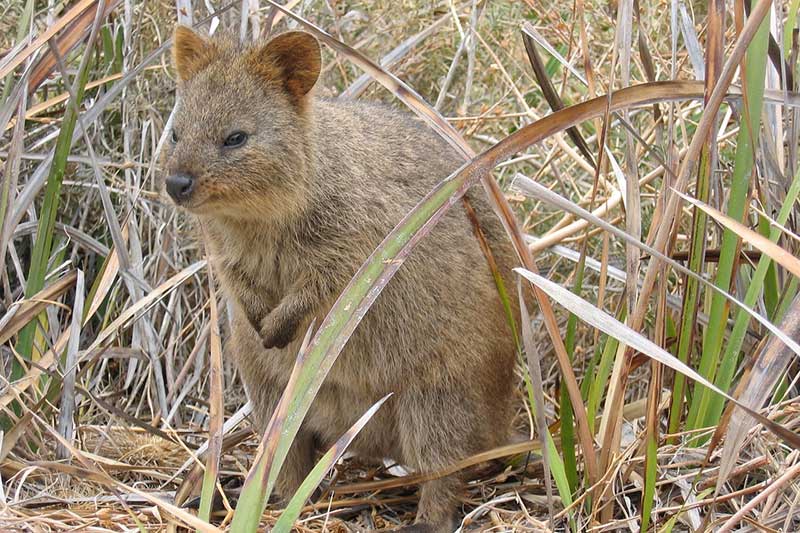 There aren’t many living animals that start with Q, but they do exist around the world. Among these interesting species include the world’s largest butterfly and a fish that can breathe air. You might also be surprised how many Q-animals can be found in or around North America. Read on to learn more!

15 animals that start with Q

Animals with common names starting with Q may be rare but here’s a list of 15 species that prove they do exist. Learn more about where they are from and interesting facts about them.

Queen snakes are slender, non-venomous aquatic snakes. While not aggressive, they will bite if threatened and smear attackers with a foul-smelling secretion.

You can find them in southwestern parts of Ontario and east of the Mississippi River from New York to Wisconsin, North Carolina, Alabama, and northern Florida. They prefer watersheds with rocky bottoms and clean running streams.

The Queensland grouper, also called the giant grouper, is one of the biggest bony, reef-dwelling fish worldwide. They are solitary fish growing at least 8.9 feet and can even feed on small sharks.

Their large mouths expand to create a strong suction when feeding. These fish also have a large range in the Indo-Pacific Ocean, extending from Australia to the Hawaiian islands.

Queen angelfish have colorful oval-shaped bodies, including bright yellow fins, electric blue spots, and orangey tips. They get their name from the blue spot on their forehead that resembles a “crown.”

You can find these fish in tropical waters in the western Atlantic Ocean, ranging from Florida to the Gulf of Mexico and the coast of Brazil. While they feed on jellyfish, algae, and corals, they are also known as cleaner fish that pick off ectoparasites from bigger fish.

Queen snappers live in warmer waters, ranging from North Carolina and down the Atlantic coast to the Gulf of Mexico and Brazil. They can survive in deep waters at depths up to 1,640 feet, but are mostly found in continental shelves of depths around 400 feet. These reddish-colored fish are large compared to other fin fish, growing around 26 inches long.

The queen triggerfish are a funny-looking multicolored fish with an oval, compressed body shape. They are aggressive biters and very territorial, especially during the breeding season when they guard their eggs.

You can find these fish in the Atlantic Ocean, including from Canada to Massachusetts and down to the northern Gulf of Mexico. They prefer rocky or coral reefs at a depth of around 10 to 98 feet.

Queretaran dusky rattlesnakes are venomous pit viper species that rarely grow beyond 2 feet long. They can be different shades of gray, tan, and brown, sometimes with reddish coloring.

You can find these snakes in high-altitude, wooded habitats of around 14,000 feet in Mexico. They are also known to mate with other snake species, producing hybrid offspring.

Native to southeastern U.S. states and northern Mexico, the Queretaran desert lizard lives in desert habitats. These lizards have the ability to change color based on their temperature – darkening when it’s colder and brightening when it’s warmer.

Quino checkerspot butterflies live up to their name with their checkered orange, black, and cream wing patterns. You can find them in open vegetative areas in the northern regions of Baja California and southern California, particularly Riverside and San Diego county. They prefer habitats with little to no invasive plants.

Native to Papua New Guinea, the Queen Alexandra’s birdwing is the largest living butterfly worldwide. They can have 11-inch wingspans, which is 10 times the length of common butterflies.

They are also beautiful with a bluish-emerald green color and black or brown stripes. Their caterpillars are black with red tentacles.

The Queen Charlotte goshawk is a forest-dwelling black and white hawk with unique eye-coloring. Their eyes are yellow to blood red and typically get darker as they age.

This bird of prey is an endangered species that can only be found in southeast Alaska and British Columbia. They live in coastal rainforests, where they typically build nests in high pine trees.

Qinling pandas are light brown and smaller than traditional giant pandas. These pandas get their names from the Qinling Mountains you can find them on.

Their limited range of altitudes above 4,000 feet makes them a rare sight, especially with only around 200 to 300 individuals left in the wild.

The Quaker parrot, also called the monk parakeet, is a bright green sociable bird that can mimic sounds and put together multiple phrases. These birds are native to the subtropical habitats in Argentina and nearby South American countries.

However, some populations also live in suburban and urban North American city parks. While popular as pets, they are illegal to own in some parts of the U.S.

Yes, the Queensland lungfish can breathe air by swimming to the surface and emptying and refilling their lungs. It’s said it sounds like a blast of air when they do.

They are also able to use their gills underwater and are commonly found in slow-moving and still rivers in northern Queensland, Australia.

Queensland tube-nosed bat gets their name from their short snouts and long, tubular nostrils. These dark brown fruit bats with grayish heads and yellow spots are solitary animals that often roost alone on tree branches.

Their mottled wings help them camouflage into the thick vegetation. You can find these bats in vine forests and subtropical parts of rainforests along the Queensland Coast of Australia.

Quokkas are cute-looking marsupials native to the Rottnest Island in Western Australia. They are nicknamed the “world’s happiest animal” due to their photogenic “smiling faces.”

Although much smaller, quokkas are part of the kangaroo family and similarly carry their offspring in a front pouch and hop around.