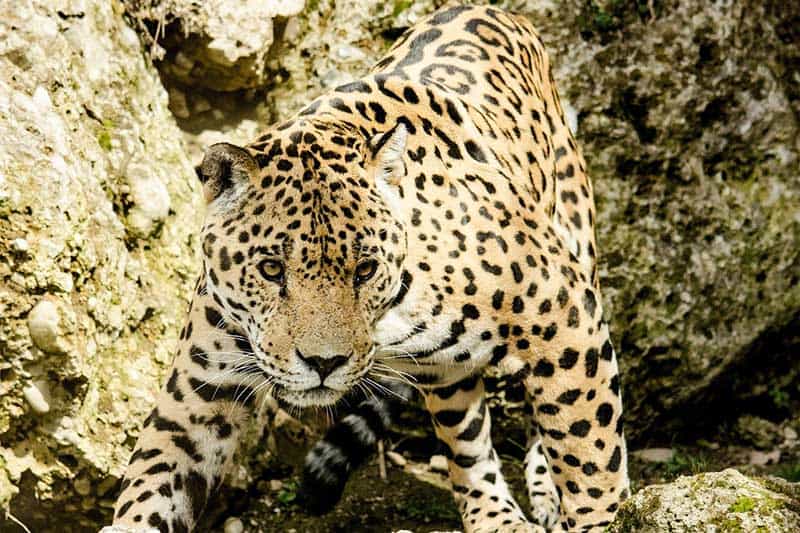 How many animals that start with J can you come up with? Jaguars may be one of the first animals that come to mind, but plenty more J-animals live in North America. Some are native species you may have heard of, but there are unique invasive species that now call North America home as well! Read on to learn fun facts about 14 animals starting with J, including where you can find them.

14 animals that start with j

From species with three horns to one named after a college, read on to learn more about 14 animals in North America starting with J.

Jaguars are the third-largest cats worldwide, growing up to 2.5 feet tall and 210 pounds. You can identify them by their rosette patterns with black dots in the middle – not to be confused with leopards that don’t have black dots.

You can find these big cats in Mexico, Central America, South America, and a rarely in few southwestern U.S. states. They can live in various habitats, including coastal mangroves, tropical forests, and lowland river valleys.

Jackson’s chameleons are adapted to living in trees, using their prehensile tails that help them grip onto branches. They have a unique look with three brown horns on their head – one on their nose and above each eye.

Males will lock horns and try to push each other off branches to defend their territory. Although they are native to East Africa, these chameleons have been introduced to California, Florida, and Hawaii as an invasive species.

The jaguarundi is a medium-sized wild cat with a uniform color of red or gray. These cats are solitary or live in pairs and hunt mainly during the day or evening hours.

Their prey includes rodents, reptiles, ground-feeding birds, and small mammals. In deserts, thorn scrubs, tropical rainforests, and deciduous forest habitats, you can find them from northern Mexico to Central and South America.

The Jico deer mouse are native to tropical or subtropical moist lowland forests in Mexico. Scientists believed they were extinct until a few individuals were found in the wild in 2003.

Like most deer mice, they have long tails, white feet, and gray to brownish coats similar to deer.

The Jalapan pine vole is a nocturnal rodent, spending the daytime hiding under fallen logs or rocks. Although native to the mountainous cloud forests in the Sierra Madre Oriental in Mexico, these voles also have isolated populations in eastern Texas.

They are the smallest vole species in Mexico, growing an average of 4 inches long and 0.92 ounces in weight.

You may also like:  20 North American Animals That Start With T (Photos)

Japanese beetles are metallic green with copper-brown wings and most active on sunny, warm days. They are significant pests to agricultural plants, turfgrass, and ornamental plants.

These beetles are native to east Asia. However, in 1916 they were accidentally introduced to North America. Their populations now range from Georgia to Missouri and north to Ontario and Nova Scotia.

Joro spiders have long legs measuring 3 inches across when fully extended. They are a species of orb-weaver spider that create golden-colored basket-shaped webs.

Although native to Southeast Asia, these spiders have become an invasive species in Georgia and South Carolina since 2014. They arrived in North America after hitching a ride on a shipping container.

Jamaican giant anoles are native to Jamaica but were introduced to Florida as exotic pets and now live in the wild of Florida and the Cayman Islands.

They prefer living on trees, including in forests and gardens. These large, bright green lizards can grow up to 5.2 inches long and prey on insects and other smaller lizards.

The Jack Dempsey is a colorful and aggressive freshwater fish known for its stern facial expression. You can commonly find these fish in southern Mexico and Central America.

However, some populations were also accidentally released into the Florida river systems. They prefer warm, slow-moving, or stagnant waters like bogs, swamps, ponds, and wetlands. 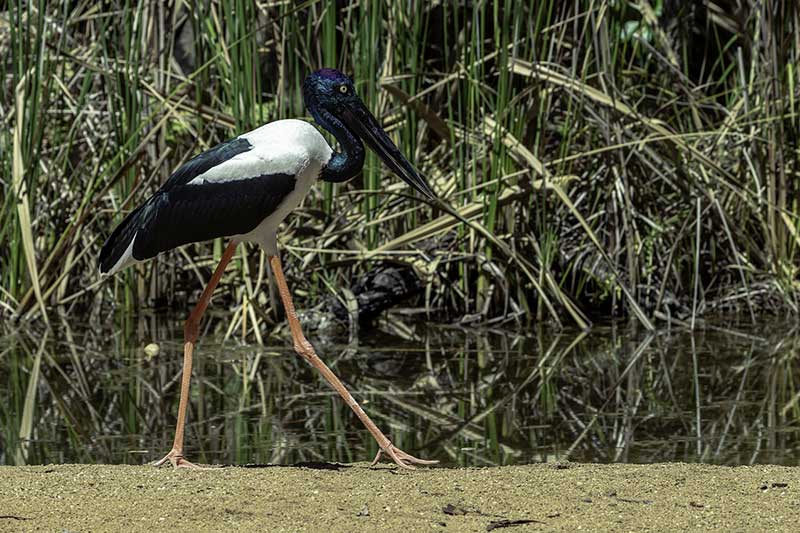 The jabiru is a mostly white stork with a distinctive black head and neck, and a red pouch at the base of their neck. Although most common from Mexico to South America, these birds are known to wander to Texas and as far north as Mississippi.

They prefer hanging out in wetlands or riparian habitats in tropical forests but also visit flooded areas and freshwater marshes.

Jefferson salamanders are black, brown, or dark gray and sometimes with blue or silver specks on their sides. Like other mole salamander species, they burrow and spend time underground during freezing or dry conditions.

They are native to northeastern U.S. states, southwestern Quebec, and central and southern Ontario. This salamander was named after Jefferson College in Pennsylvania.

Junaluska salamanders are brownish-yellow with small dots along their bodies. They are a species of lungless salamander and breed in large streams, attaching their eggs to the bottom of rocks.

You can only find them in water habitats in the Blue Ridge Mountain area of North Carolina and creeks in the Great Smoky Mountains National Park areas of Tennessee.

The Japanese littleneck is a burrowing clam found in shallow waters with mud, gravel, or sand bottoms. Although native to Asia, they have been accidentally introduced to the wild of North America, especially since they are well-known edible clams.

You can now commonly find them in Hawaii and along the Pacific Coast from British Columbia to California.

You may also like:  7 Types of Animals That Go Through Metamorphosis

The Javan file snake, sometimes called the elephant trunk snake, is a non-venomous aquatic species with a flat head and stout body. They are so well-adapted to living underwater that leaving the water can cause them injury since their body can’t support their weight.

Native to Southeast Asia, this snake was introduced to Florida and established a population there since the 1970s.