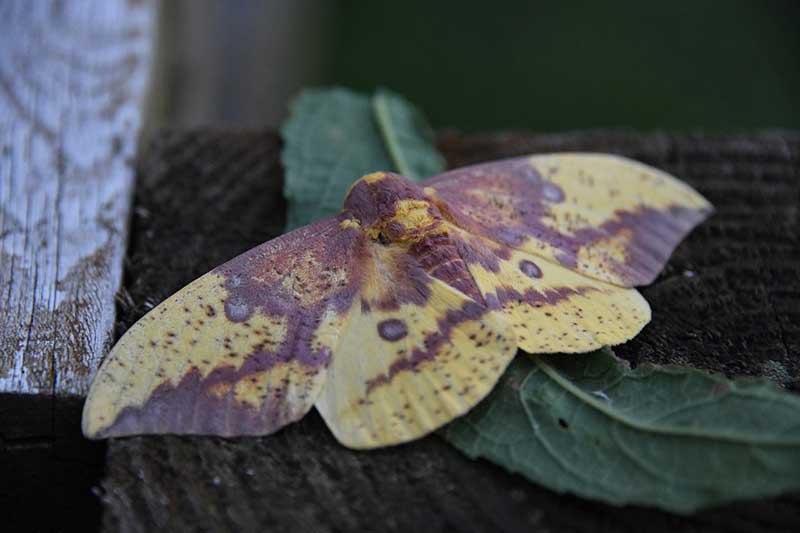 There are a wide variety of animals that start with the letter I in North America, just like the Imperial Moth pictured above. Each one of these species has unique characteristics and traits that show how fascinating wildlife is. Here are 15 animals that start with I we’ve chosen for this article, including where you can find them.

15 animals that start with I

Read on to learn about 15 North American animals starting with I.

Island foxes are small, solitary animals active mostly at night. They are omnivorous, eating both plants and animals, such as reptiles, island deer mice, and insects. You can only find these foxes on the Channel Islands off the Pacific coast of southern California.

Indiana bats are medium to small dark brown to black bats with 9 to 11-inch wingspans and mouse-like ears. They are social bats living in large numbers, clustering together when they hibernate in caves or abandoned mines.

Although nearly half of their population hibernate in southern Indiana, you can find them throughout the eastern and midwestern states of the U.S., including New York, Illinois, and Ohio.

The insular vole is a small, stocky rodent that looks similar to a mouse but digs burrow systems. They are active during the day feeding on plant matter while hiding from birds and arctic foxes that prey on them.

These rare voles can only be found on two islands in Alaska: St. Matthew Island and Hall Island. They prefer low mountain slopes, rye grass-covered beaches, and damp lowland habitats.

Imperial moths are mostly yellow with light to dark brown lines, spots, and splotches. They are a widespread and large silkworm moth, growing to wingspans of 3 to 7 inches.

You can find them from Canada to Argentina. In the U.S., they range from New England to Florida and west to the southern Great Lakes regions and central Texas. Common host plants for their silkworms are pine, oak, maple, and sweetgum trees.

Iceland gulls are graceful birds known to fly over the water, plucking up fish from the surface without landing. They are medium-sized with small beaks and pale gray with mottled brownish wings.

Ivory gulls are Arctic birds with breeding areas, including areas in north-eastern Canada. Adults are all white with bluish-green bills and black legs. They mostly feed on small fish and marine invertebrates.

However, they are also known as companions to polar bears since you can find them scavenging on carcasses of seals and other mammals left by polar bears.

Idaho pocket gophers are small rodents growing up to 7.4 inches long – slightly smaller and lighter in color than the northern pocket gopher. You can find them in northwestern U.S. states, particularly Montana, Idaho, Utah, and Wyoming.

They prefer dry savanna, grassland, and temperate forest habitats. Like most pocket gophers, they carry their food in cheek pouches to store underground in their burrows.

Idaho giant salamanders can grow up to 13 inches long and vary in color from brown and purple to tan and grey. They are the darkest and most blotched among giant salamander species.

They live mostly in forested watersheds in Idaho, from the Salmon River to lake Coeur d’Alene. However, there are also populations around Mineral County in Montana.

You can find island glass lizards in coastal regions of South Carolina and Georgia, including offshore islands. They are slender, long, legless lizards that look a lot like snakes.

However, unlike snakes, they have inflexible jaws, moveable eyelids, and external ear openings. They get their names from the fact they can “shatter” and easily break their tails off in several places.

Italian wall lizards are brown and green, growing an average of 5.9 to 9.8 inches long. Although native to Europe, they have been introduced worldwide and are an invasive species in North America, Asia, and Africa.

Initially, they were imported to the U.S. for the pet trade but escaped and now live in abundance, especially in the midwest and eastern U.S. states.

Interior least terns are the smallest tern species in North America, growing up to 10 inches long with 20-inch wingspans. They nest by freshwater habitats, including the Mississippi, Colorado, Rio Grande, and Missouri river systems.

These migratory birds spend their winters in South America and the Caribbean. They are also opportunistic hunters feeding on fish in shallow waters in rivers, lakes, and ponds.

Intermediate musk turtles used to be considered a hybrid of two subspecies, but after DNA research, they were declared a new species in 2017. These small turtles are 4 to 5 inches long and enjoy walking along creek bottoms.

They are native to the Choctawhatchee River and Conecuh River basins in Alabama but have also been seen in Florida.

Immortal jellyfish live up to their name by being the only jellyfish species known to regenerate and reset to an earlier stage of life if they are starving, injured, or dying.

You may also like:  20 Amazing Animals That End With N (Pictures)

They can only die if they are removed from the water, eaten, or catch a disease. Although believed to have originated from the Pacific Ocean or the Mediterranean Sea, you can now find them in temperate to tropic waters worldwide.

Ixtlán deer mice get their name from their color patterns looking similar to deer. They have brownish fur with white underbellies and legs. These mice are native to southwestern Mexico, especially in the Sierra de Juárez. With their limited range and declining population, the IUCN has listed them as critically endangered.

Island deer mice are widespread in North America, ranging from southern Canada to central Mexico and Baja California. While they are common in the Channel Islands, you can also find them along the coast in east Texas.

These nocturnal animals are important for the ecosystem, especially since they eat and spread seeds of native and non-native plants.