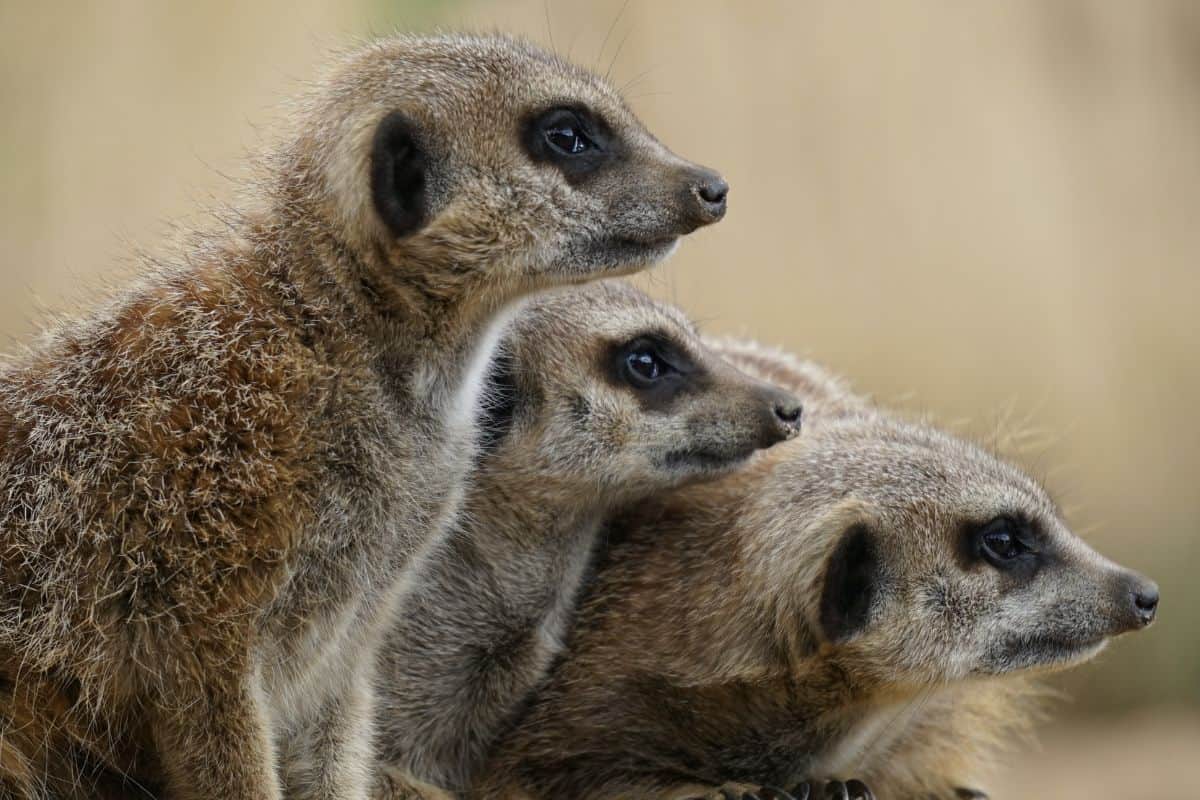 With so many animals in the wild all through the world, it’s difficult not to get interested to know if there are animals that end with t. We have exciting news! The elephant isn’t the only animal in this category.

This article will share some of the animals whose names end with the letter t, so prepare to learn more about these creatures.

19 Animals that end with t

Asian elephants are found in India and Southeast Asia. They spend most of the year in densely forested areas near water sources such as rivers or lakes, where more vegetation is available for food consumption.

Their diet consists primarily of plants such as bamboo shoots or grasses, as well as tree barks, roots, leaves, and small stems. They can grow to be 9 feet tall and weigh around 15,000 pounds.

Ring-tailed cats are a type of raccoon that can be found all over North America, from Oregon to Mexico. These creatures are about 2 pounds in weight and have long bodies and tails. They have brown or black fur with white rings around their tails.

You can find these animals primarily in rocky areas and forests, such as canyon walls and rock piles, where they hunt small animals such as birds, rodents, reptiles, and small rabbits.

Bobcat is a medium-sized cat native to North America. It’s the most common wild cat in North America and can be found all over the continent. They’re excellent hunters who live in various habitats, such as forests, coastal swamps, and scrublands.

The animal has a short tail, long legs, and large clawed feet. Its color is tan or brown, with black stripes on its face, legs, and tail. It can weigh anywhere from 8 to 40 pounds, with males being heavier than females.

Eastern yellowjackets are a type of wasp found in North America’s tropical regions. They’re medium-sized wasps, with queens about an inch long and workers about half an inch long.

These black and yellow insects are frequently confused with honey bees. However, honey bees have hairy bodies, while yellowjackets have shiny, hairless bodies. These wasps consume both flower nectars and other insects.

The big brown bat is a common bat species that live in North America. They get their name from their large size, which makes them easy to spot from a distance. Their backs are covered in dark brown fur, with lighter-colored fur on the undersides.

Their wings are also large and broad, giving them a triangular shape that distinguishes them from other bats. They prefer to live in meadows and forests with large canopy trees and plenty of space to roost. Beetles, moths, flies, mosquitoes, and locusts are among the insects they consume.

Meerkats are small, cat-like mammals native to Africa. They live in large groups called “mob,” which can range up to 40 meerkats. These groups act as a unified family, defending one another from predators and hunting for food cooperatively.

You may also like:  8 Types of Animals That Glow in the Dark

These creatures are omnivores, eating insects, lizards, birds, and fruits. They’re distinguished by their upright posture and long, skinny tails, which they use to balance themselves while standing on their hind legs.

Egrets are wading birds with long legs that belong to the heron family. They originated in Africa but were discovered in North America in 1953. Males and females look alike as adults, but males are typically larger than females.

You can find the birds in a variety of wetlands, such as saltwater marshes, mudflats, and mangroves. They consume fish, crustaceans, and amphibians as food. These birds are long-lived animals, with a wild lifespan of 15-22 years.

Black-footed ferrets are weasels that live throughout North America, including Wyoming, South Dakota, Montana, and Arizona. They can be found in farmlands, mountains, plains, deserts, and forests. These are carnivores that feed on small mammals such as rats and squirrels, with prairie dogs being their favorite.

The mountain goat is a hoofed mammal found in North America and the largest mammal in high-altitude habitats. They can be found at elevations of up to 13,000 feet in mountainous areas.

These goats have a stocky build and short horns that curve back toward the face. They have thick hair coats that help them stay warm in cold climates.

Thick-billed parrots are medium-sized birds with long tails and thick bills. They’re apple green in color, which helps them blend in with the pine needles where these birds live.

These parrots are indigenous to Mexico and live in the Sierra Madre Occidental Mountains. They primarily feed on pine tree seeds, but will also consume berries, seeds, fruits, and bark.

The common pheasant is a bird that’s found all over the world. It’s generally considered an introduced species in North America, but it has become naturalized in some areas. This bird is frequently kept as a pet or for hunting.

Males are typically golden brown, while females are paler brown or black. The common pheasant prefers open plains, scrublands, and grasslands where there is plenty of food and shelter.

European rabbits are small, short-legged mammals that eat grass and live in open areas. Their fur comes in a variety of colors, including brown, black, and white. They have large ears as well as short, fluffy tails.

These animals dig burrows for shelter and to raise their young, and they build warrens (nests) of grasses, leaves, twigs, and other materials in which these rabbits sleep. Rabbits are herbivores, meaning they eat grasses, herbs, fruits, and vegetables.

The black rat is a common rodent found in most human-inhabited areas, including farms, warehouses, and residential buildings. They emerge at night to seek food or water sources, such as sewers or other holes where these animals may find water, but they can also be seen during the day.

You may also like:  15 Invasive Species in Florida (With Pictures)

These creatures consume almost everything that humans consume, including grains such as wheat or rice, vegetables, fruits such as bananas, and even meat products such as beef jerky.

Stoats are carnivores with long bodies, short legs, and large paws. Stoats are covered in thick fur that’s brown or grayish-brown on their backs and sides, but white on their bellies. Their tails have black tips, and their ears are short and rounded.

You can find these animals in open grassy areas like sand dunes, grassland, and woodlands. They live in areas with a lot of rabbits and rodents for them to eat.

The black wildebeest is an antelope that lives in Africa’s savannas. Their coat is brown to black with whitish tails. They stand about 1.8 meters tall and weigh around 130 kilograms.

You can find these animals living in herds called confusion. These animals are important grazers in their environment, and their diet consists primarily of grasses.

The common wombat is a marsupial that lives in Australia. They’re herbivores that primarily consume grasses and tree roots.

These animals have short legs, and their bodies are covered in black, gray, or brown fur. They have small ears, a short nose, and a tiny tail.

These burrowing wombats live in wet, forested areas. Their burrows usually have multiple entrances and sleeping quarters. They’re also fast animals, capable of running at speeds of up to 40 km/h.

Fall field crickets are a common type of cricket in North America. They’re brown and black in color, and their wings are usually folded back over their backs. Fall field crickets can be identified by the dark stripes on their foreheads.

The crickets live primarily in woodlands, fields, and even buildings, where they hide in burrows or cracks. These animals communicate and attract other fall field crickets by rubbing their wings together and making a “chirping” noise.

Muskrats are large rodents with brown to black short, dense fur that keeps them warm in cold water. They have long tails and webbed hind feet that help in swimming and navigation.

Their front paws, however, aren’t webbed. They’re found in wetlands near lakes, ponds, rivers, marshes, and streams throughout most of Canada, the northern United States, and Mexico.

The Shell Parakeet is a small parrot native to Australia and New Zealand. Because of their high intelligence, these birds make wonderful pets. They inhabit grasslands, open forests, grassy woodlands, and even farmlands.

These parakeets are omnivores that eat seeds, vegetables, and fruit. These animals are also known for their ability to mimic human sounds.