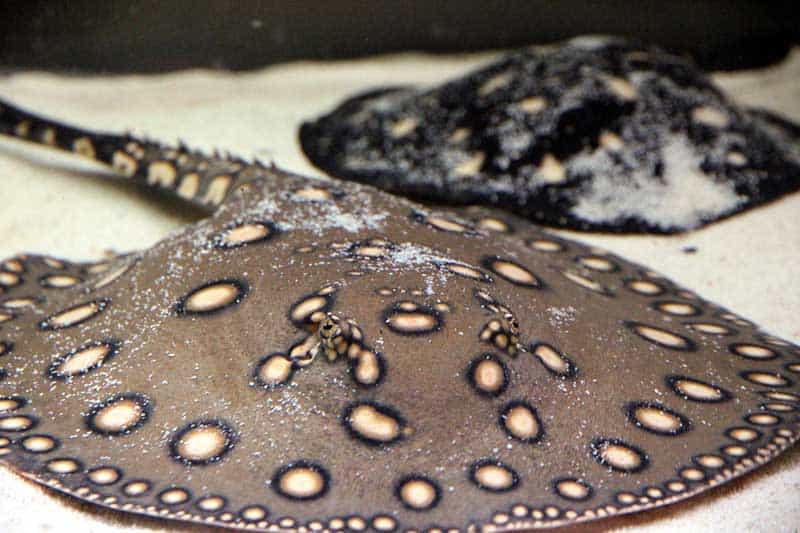 It’s easy to assume there are no animals that start with X. Especially since there aren’t even that many words starting with this letter! Sticking to their common names, here’s a list of 15 animals you might never have heard of, starting with the letter X. Read on to learn more!

14 animals that start with x

The following is a list of animals starting with X, many of which live in North America. Let’s have a look!

Xantus’ leaf-toed gecko gets their name from the expanded leaf-shaped pads on their toe tips. They also have fragile tails they frequently lose and tend to squeak when you handle them.

You can find them in southern California to northwestern Mexico, including most of the Baja California peninsula. They prefer semi-desert mountain slopes, canyons, and areas with exposed rocks.

Xemes, also known as Sabine’s gull or fork-tailed gull, have a striking black and white wing pattern against their grey backs. They also have distinctive black beaks with yellow tips.

These social birds spend most of their time at sea, feeding in large flocks. They breed in the Arctic regions of North America and Eurasia. They fly south as far as western South American countries for the winter.

Xantus’ swimming crab have flattened, paddle-like back legs that help them swim rapidly or burrow into the sand backward to get away from predators. They have purplish legs, sharp spines on the sides of their body, and enjoy eating other crabs, especially smaller sand crabs.

You can find these crabs in California, mostly south of Morro Bay. However, sightings have been made in Monterey Bay, San Francisco Bay, and Tomales Bay. They prefer living in muddy or sandy habitats, such as mudflats or eelgrass beds.

The xami hairstreak is a rare butterfly species that is brownish and green with jagged white lines on their wings. They are known as hairstreaks because of the hair-like markings on the underside of their back wings.

This specific species ranges from southwestern U.S. states to Mexico and Central America. They feed on the nectar from flowers and prefer hovering over the flower instead of landing on them.

Another butterfly starting with X, the xeniades swallowtail is black with white upper wing spots and rows of elongated orange or red spots on the hind wings. These butterflies are native to South American countries, such as Peru, Colombia, and Bolivia. Their caterpillars feed on the aristolochia plant, which gives them a toxic quality to prevent predators from eating them.

Also known as the California sargo, the xantic sargo is a medium-sized bottom feeder fish. They hunt at night for crustaceans and mollusks and spend the day hiding among rocks or other underwater structures.

Their pouty expression earned them a nickname as “sweetlips,” and they can interestingly make grunting noises by grinding their teeth together. They aren’t popular in cooking because of their small size but are still common gamefish.

The xeric ambersnail gets their name from their very thin shells with a translucent and amber glow to them. These air-breathing land snails prefer dry, sunny grounds and are very common in grassy hillsides or backyards. You can find them in some areas of Canada and all over the eastern U.S. states, including Maine, Oklahoma, and Florida.

The Xingu river ray is a black or dusky-brown freshwater stingray with white blotches on their bodies. Like other rays, they have a venomous stinger in their tail, with toxicity that decreases as they get older. They are native to the Xingu River basin in Brazil, which gives them their name, and prefer hanging out on rocky bottoms.

The x-ray tetra get their name from their transparent skin, where you can see their bones and internal organs as if through an x-ray. These small freshwater fish are from South America and are abundant in the Orinoco and Amazon river systems. However, they can also tolerate brackish, or partially salty, waters to feed on plankton and insects. They are a popular fish to add to home fish tanks.

Xantus’ hummingbirds are small birds around 3 to 3.5 inches long and weigh between 0.11 and 0.14 ounces. They have green on their back and upperparts and a distinctive white eyestripe against a black stripe underneath.

Although native to Baja California and Mexico, there have been reports of these birds in southern California and further north up the Pacific coast. They were named after the Hungarian zoologist John Xantus de Vesey.

The Xinjiang ground-jay, also known as the Biddulph’s ground jay, is a pale brown, small bird with black and white wings. They also have a black mustache that curves upward toward the face.

These birds can run fast as they chase after reptiles and make rapidly descending trills and whistles. Native to China, they are considered near threatened because of disturbances in their habitat.

Xanthippe’s shrews are small rodents native to Tanzania and Kenya in eastern Africa. They live in shrubland habitats and dry savanna, including the foothills of the Usambara Mountains in Tanzania.

These shrews prefer eating beetles, mice, grasshoppers, grubs, seeds, nuts, and vegetation they can find underground. To keep up their energy, they need to eat every 3 to 4 hours.

The Xucaneb robber frog ranges in color from yellowish to brown with whitish patterns. Like most robber frog species, they make a barking sound similar to a dog. They prefer living in elevations of 2,000 to 4,300 feet and live in undergrowth and bushes.

These frogs are native to Guatemala and most abundant in Sierra de las Minas, Sierra de Xucaneb, and Sierra de la Cuchumatanes. However, they are on the brink of endangerment because of deforestation and the expansion of logging and farmland that have destroyed their habitats.

You may also like:  15 Animals That Migrate (With Pictures)

The xolocalca bromeliad salamander is typically brownish lavender but can also have a black and creamy coloring. They grow around 2.2 inches long, with a flattened and broad head.

These salamanders are a vulnerable species and can only be found in Mexico in the forested areas near Chiapas. They prefer forests at elevations of 6,000 feet with oak and pine trees.