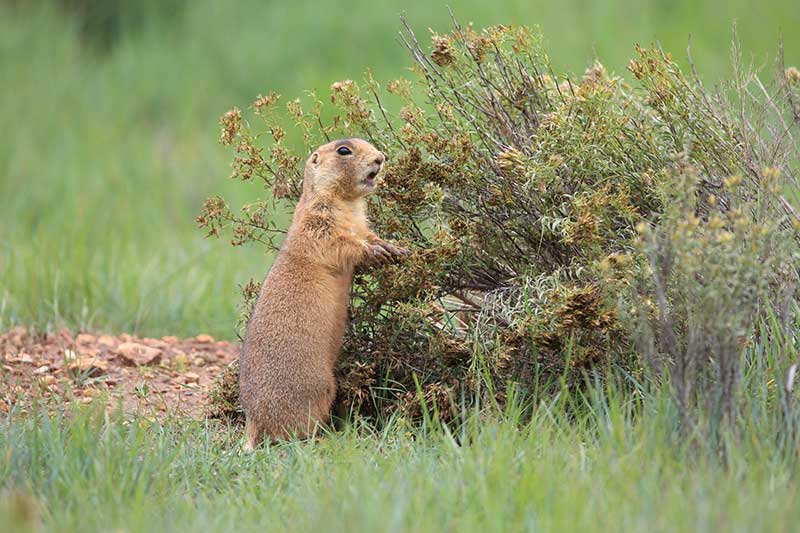 It’s not the most common first letter for an animal name, but there are plenty of different animals starting with the letter U. From birds to frogs to squirrels, in this article we’ll look at 14 North American animals that all have names that start with the letter U.

14 animals that start with u

Animals starting with U do exist and you may be surprised at how many can be found in North America. Let’s see how many of these animals you already know!

Utah prairie dogs are native to southwestern Utah, including the West Desert and Awapa Plateau. They live on valley floors at elevations of 5,400 feet to mountain habitats up to 9,500 feet.

Despite their name, they aren’t dogs but ground-dwelling rodents in the squirrel family. They live in tight-knit communities in their complex tunnels that connect to large underground “rooms.” 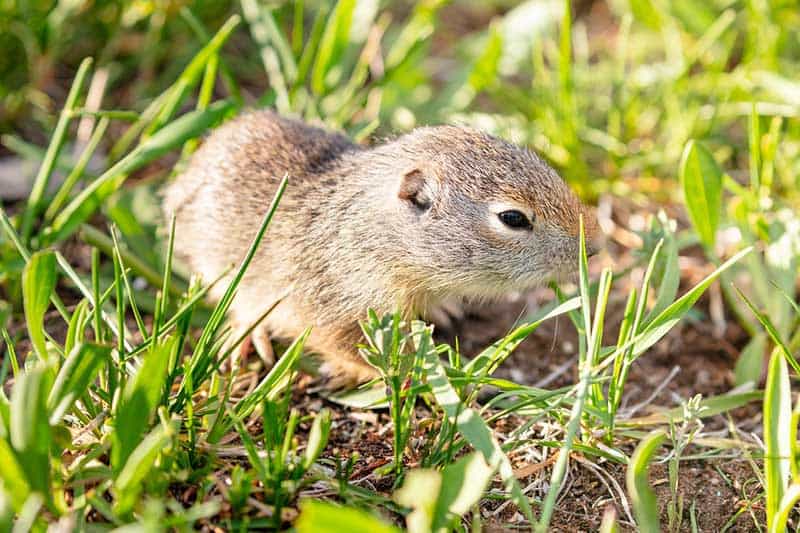 Uinta ground squirrels were first found in the Uinta Mountains and live in southwestern Montana, Wyoming, eastern Idaho, and central and northern Utah. Although they look similar to prairie dogs, ground squirrels are different animals.

They build burrows in orchards, yards, and around building patios, fences, and decks. However, when needed, they can also climb trees.

Uinta chipmunks live in mountainous and sub-alpine forests in the western U.S. states. Although they spend time mostly in trees, they can also burrow under logs, rocks, and brushes.

They are known for their ability to store acorns in their cheek pouches to later carry to their burrows. One chipmunk can collect up to 100 acorns per day!

Although they are widely distributed in Mexico and Central America, unicolored jays are rarely known. You can typically find them in wet cloud forests hunting for large insects, fruit, seeds, and small vertebrates. These birds are a uniform deep-blue and prefer spending time in the trees, rarely coming down to the ground.

Native to tundra habitats, you can only find the Unalaska collared lemming on two Alaskan islands: Umnak and Unalaska. You can commonly see them in areas with willow shrubs or high, rocky areas.

These rodents have a pure white coat in the winter and dark gray to reddish-brown tone in the summer. They also have unique digging claws on their front toes to help them break through snow and ice.

Upland sandpipers have a dove-like head, long neck, and marbled brown and black back and wings. Their breeding range is in North America, including Alaska, Montana, Oklahoma, New England, and Oregon.

They will winter in South American countries such as Argentina and Brazil. Although they are sandpipers, they prefer open grasslands over coastal habitats. Their diet includes grasshoppers, weevils, beetles, moths, spiders, snails, and ants.

Found in and around Australia, the Ulysses butterfly is a species of swallowtail butterfly named after a Greek hero. They are a beautiful, brilliant blue with dark edges and wingspans around 5.5 inches. Native tropical plants they enjoy visiting, include the clusters of small pink flowers of the Corkwood Tree.

The uniform finch is a bird with a distinctive high-pitched and buzzy sound. Males are plain dark gray and females olive-brown with streaky breasts. You can find them at forest borders in the South American countries of Brazil, Argentina, and Paraguay. These birds are commonly associated with bamboo plants and will forage near or on the ground.

Uniform crakes are a bird living in the wetlands and swampy forests of southern Mexico and Central and South America. These large, brown birds grow up to 9 inches and have distinctive orange to red legs. They prefer wandering on the ground along forest swamps and streams, hunting for spiders, insects, lizards, and small frogs.

Underwood’s mastiff bats are a rare, nocturnal species that feeds on grasshoppers, moths, leafhoppers, and beetles. You can identify them by listening out for the high-pitched “peeps” they emit during flight.

These bats can fly at least 26 miles per hour. They are the second-largest bat species in the U.S., with wingspans up to 22 inches long and weighing around 2.5 ounces. You can find them limited to southern Arizona regions and Sonora, Mexico.

Upland chorus frogs are grey or brown frogs with a light line across their upper lip. Their mating call is a distinctive repeated “prreep” or “crreek” commonly compared to the sound of running a finger along a comb.

You can find them in woodlands, grassy areas, bogs, and wetlands throughout the eastern U.S. states. However, these secretive, nocturnal frogs are typically only seen or heard immediately after it rains.

The Utah sucker is a freshwater fish with thick lips on their mouth located on the underside of their head. They are a large species of sucker, growing up to 25 inches long. These fish are native to western North America and can commonly be found in Lake Bonneville and the upper Snake River.

They can survive in cold or warm waters and in waters with sand, silt, gravel, or rocks. They are popular among fishermen but can be a tough catch with their hard-fighting ways. Fighting them on ice tackle is considered an ice-fishing achievement.

The Utah chub is a chunky fish, growing up to 18 inches long and several pounds heavy. These freshwater fish are native to western North America, with abundance throughout the Lake Bonneville basin and in the upper Snake River.

In some reservoirs, their population has grown so much they compete for food with trout. Some biologists believe they may eventually establish themselves in the Mississippi River.

Unlined giant chafer beetles are light reddish-brown, medium-sized beetles with bands of yellow hairs. They can grow around half an inch long. Although originally from Europe, these beetles are now an invasive species in North America.

They feast on the roots of wild and cultivated grasses, making them a pest for anyone wanting to keep their lawns nice.

You may also like:  24 Animals That Adapted To Their Environments