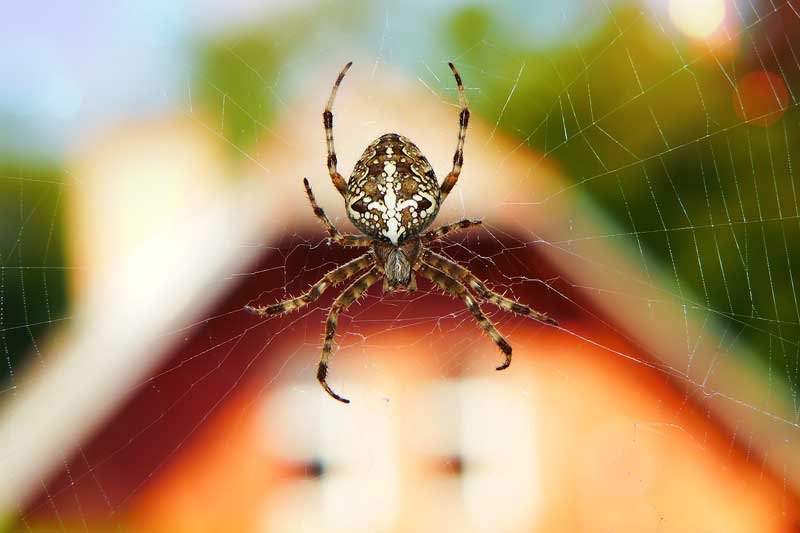 Spiders are one of the most common arachnids on the planet. In fact, it’s estimated that at any given time you’re never more than 10 feet away from a spider. We know they feed primarily on insects, but do spiders eat ants?

They’re incredibly diverse and can be found on every continent with the exception of Antarctica. In North America alone there are over 3,400 species of spiders.

Some spiders are tiny and only reach less than a quarter inch in length, while others are much larger, with leg spans up to a foot long. They’re arthropods and have a hard, protective exoskeleton on the outside of their bodies.

While most people have an aversion to spiders due to their long, spindly legs, they’re important creatures and mostly harmless to humans. They eat more pests than you might realize and play a vital role in our ecosystem, even helping to pollinate plants.

Not all spiders eat ants, though there are a few species prefer them. These species include black widows and lynx spiders. Other spiders, such as the jumping spider, will also eat ants it they’re available.

Zodarion rubidium is another type of spider that exclusively preys on ants. They mimic ants and their physical structure even resembles ants.

For the Zodarion rubidium spider that eats only ants, nutrition plays a key role in its survival — and the various parts of an ant have different nutritional values.

For this reason, these spiders will choose which parts of the ant to eat first, prioritizing the parts that have the most nutritional value.

First, they eat the front ends, which are full of protein, before moving on to the hind part, also called a gaster.

What else do spiders eat?

Spiders have a pretty varied diet, eating prey such as the following:

Large varieties of spiders can eat larger foods such as:

How do spiders eat their prey?

It’s well known that spiders spin their webs in order to trap and capture prey, but when it comes to physically eating their victims the process may be different than you think.

Spiders don’t just bite and chew their food, instead they have a unique way of digesting prey.

They possess appendages near their mouths called pedipalps, which are used to sense objects near and around the spider and to hold their prey in place.

Once the prey is within its grasp, the spider uses its fangs to inject its venom and digestive enzymes— liquefying the insects insides. The spider then drinks this sort of bug protein shake, leaving just the exoskeleton behind.

Other spiders have different ways of capturing prey, however. While some species rely on sticky webs, other species will actively hunt their prey. Certain spiders will even dig holes and wait inside, ready to grab unlucky prey that wanders by.

What do spiders eat in the winter?

Unfortunately, many spiders that live outdoors don’t survive the winters. In order for spiders to preserve their species, they mate and lay eggs in the fall and die after they finish building the nest.

There are other spiders that hibernate during the winter. These spiders build insulated pods and stay inside until the weather warms up.

Spiders in cold regions have a special ability to survive the cold by building up glycol compounds in their bloodstream. This acts as a kind of antifreeze — preventing the spiders from freezing even in some below freezing temperatures.

What do house spiders eat?

Finding a spider in your house is actually a good thing. They provide natural pest control service even in the winter, getting rid of insects such as cockroaches, mosquitoes, clothes moths, fleas, and flies.

Many of the insects that house spiders get rid of, like mosquitoes and fleas, also carry diseases, so think twice before you squish an indoor spider.

Spiders also eat other spiders. When spiders run into each other they fight and the winner eats the loser.

This creates a type of population control among the spiders living in your house, with the largest, most powerful spiders clearing out the smaller ones.

Why doesn’t a spider get stuck in its web?
The body of a spider is coated with an oily substance so that it doesn’t get snagged in its own web. They also have claws on the tips of their legs they use to traverse their web and swing from strand to strand without getting stuck.

What is spider silk used for?
Spider silk is a very strong, yet flexible fiber made of protein. Spiders use it to climb, to create egg sacs, to build nests, to wrap their prey, and for other uses.

Are all spiders venomous?
Pretty much all spiders possess venom used to subdue and digest their prey. Thankfully, only a handful of spiders are actually dangerous to humans.

When are spiders active?
You’re likely to see more spiders out and about during late summer and early fall. This is mating time for spiders and male spiders come out of hiding to look for females.

Are spiders nocturnal?
Most spiders are nocturnal and hide during the day in their webs or in small, safe places.