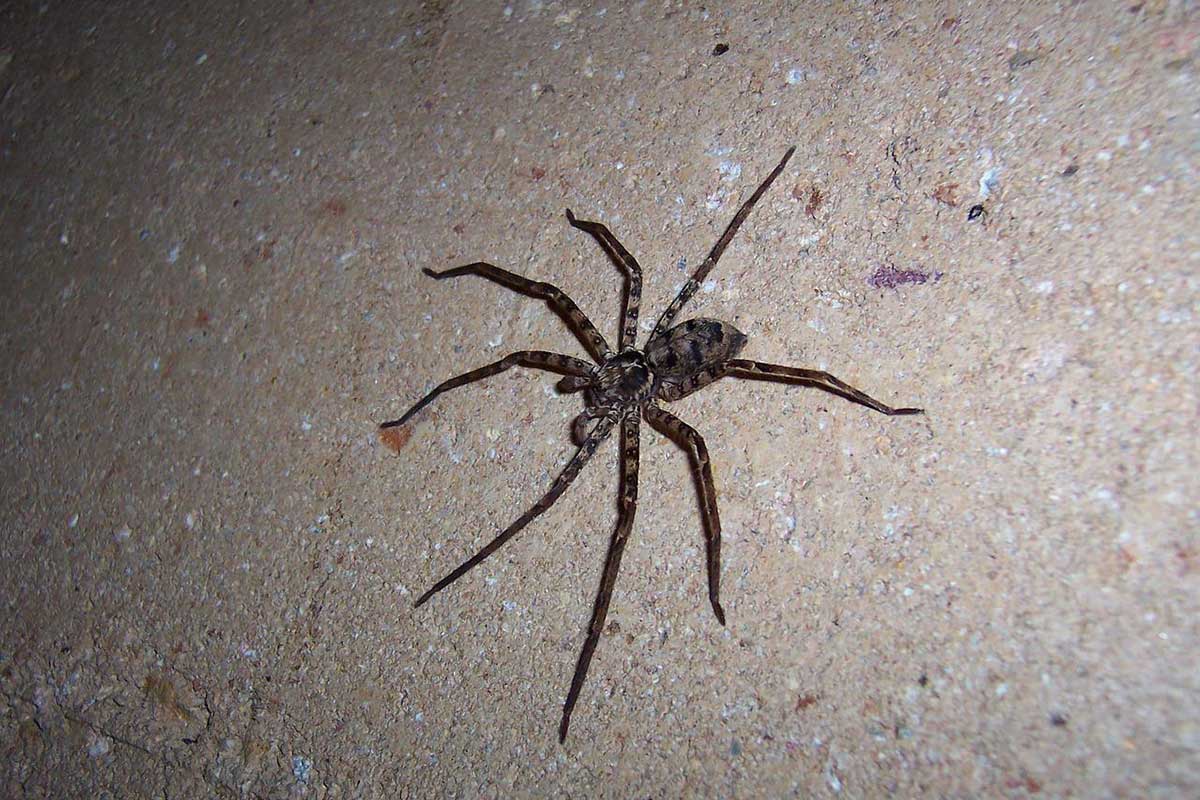 Huntsman spiders (Sparassidae) are a family of large brown spiders, sometimes referred to as giant crab spiders or banana spiders. They are known for their speed, interesting way of moving, and predatory nature. Although scary-looking, especially if you find one in your home, these spiders are filled with unique attributes. Learn about interesting facts about huntsman spiders that may change your perspective on these speed-hunters the next time you encounter one!

From doing backflips mid-run to their protective parenting rituals, find out 17 interesting facts about huntsman spiders. Some may be surprising to you!

1. There are over 1,200 species of huntsman spiders

Huntsman spiders in the family Sparassidae include over 13 genera and 1,200 species. They are an invasive species from Asia and around 155 species live in Australia. Although not as common in North America, there are populations in tropical and semi-tropical habitats in Florida, Texas, and California as well as coastal areas of South Carolina and Georgia.

These spiders eat a variety of prey and can feed on anything that is small enough for them to capture. Their diet includes various insects, lizards, arthropods, and amphibians, such as cockroaches, butterflies, scorpions, bats, and mice.

3. Huntsman spiders are solitary or social

Some huntsman spiders prefer living solitary lives. However, some species thrive in large colonies. For example, you can find the flat huntsman spider living in groups of up to 300 individuals.

Although typically grey to brown with banded legs, some species are more vibrantly colored. For example, the tiger huntsman is bright orange and yellowish.

5. Huntsman spiders are one of the largest spiders

These spiders typically have 1-inch long bodies with leg spans stretching up to 5 inches. Most females are also larger than males. The largest documented huntsman spider had a legspan of 12 inches, making it one of the world’s largest spiders by diameter. Some people describe them as being as big as a dinner plate.

Huntsman spiders don’t use webs to capture their prey. Instead, they wander the ground searching for food. Although they don’t spin webs, they do spin a cocoon-like sac during molting or laying eggs.

7. Huntsman spiders can move up to 3 feet per second

Since huntsman spiders hunt on the ground, their long legs and speed help them capture their prey. They can move up to 3 feet per second and some species can even do backflips mid-run.

These hairy spiders have larger front legs than their back ones. Their legs have twisted joints allowing them to bend their front legs forward like a crab. This position allows them to crawl in multiple directions quickly.

Besides running after their prey, huntsman spiders can also wait patiently to ambush unsuspected insects. They are sometimes called the flower spider since they will wait on flowers for prey to land nearby.

10. Some huntsman spiders can cartwheel

The huntsman spider species called the Moroccan flic-flac spider (Cebrennus rechenbergi) has a unique way of moving. They can cartwheel away from threats. You can find them in Morocco and they are the only spider known to move this way.

Huntsman spiders have glands that inject deadly venom into their prey once captured. They also use their strong mouthparts to assist in killing prey. Although venomous and their bites can be painful, these spiders aren’t life-threatening to humans. Symptoms of a huntsman spider bite typically aren’t more serious than headaches or mild nausea.

12. Huntsman spiders are gentle during courtship

Despite being ferocious predators, huntsman spiders are surprisingly gentle during their mating routine. The males in most species will drum their legs or abdomens on the ground to create vibrations interesting to the females. They are also a spider species where the females and males don’t hurt each other after their long courtship ends.

After the mating, females will lay a ground sheet of silk that she anchors the egg sac to before laying up to 200 eggs. She then places the egg sac under a rock or bark. Some species also carry the egg sac around under their bodies.

Fiercely protective, female huntsman spiders guard both their eggs and young hatchlings. They will lay their eggs in a sac of silk and will guard it or carry it in her jaws. They also guard their babies until they are less vulnerable after molting several times. This can take weeks and the female spider doesn’t eat during this time.

15. Huntsman spiders are not typically aggressive toward humans

These spiders aren’t known to be aggressive to humans. If they run toward you, they are probably scared and confused. However, females can be more hostile when guarding their egg sacs. She will rear up in a defensive display if threatened.

16. Huntsman spiders are adapted to living in narrow spaces

17. You can find huntsman spiders in the United States

Although these spiders typically live in Australia and parts of Asia, there are also some isolated populations living in areas of subtropical Florida, Texas, and California. They have also been reported in coastal Georgia and South Carolina. Within its limited range in the U.S. some will even wander into homes and cars.