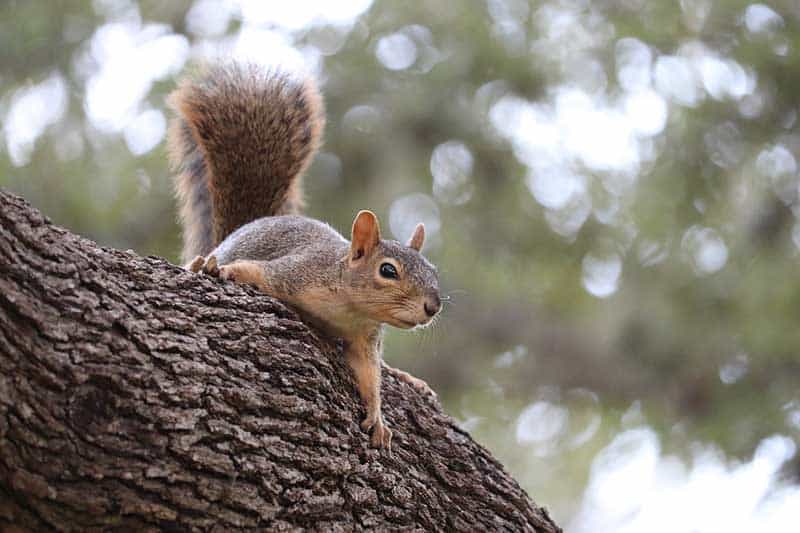 You might have seen squirrels running after each other up and down trees or across a lawn. I often see them running circles around my big oak tree at full speed. But why do squirrels chase each other? The reason can vary depending on the age of the squirrels and whether they are male or female. Let’s explore the behaviors of squirrels and find out more about why they often “play tag” (and if they’re even playing!)

There are at least 11 different types of squirrels in the United States, and they all may exhibit this behavior.

Why do squirrels chase each other?

Here are 6 of the main reasons you might see different squirrels of different ages and sexes chasing each other around trees or across lawns.

When you see adult male squirrels spiral up and down trees chasing each other, it’s typically for territorial reasons or disputes. You can usually identify a territorial dispute when you see the chasing squirrel nipping the other until the intruder leaves the area.

Ground squirrels usually have a territory range of around 225 feet surrounding their burrows. Their burrows help them survive by protecting them from predators, so they are very aggressive if anyone intrudes into their space. Sometimes female squirrels will also show territorial signs when there are limited nesting sites to raise their young.

While protecting their territory does involve protecting food sources, some species that aren’t territorial will chase away squirrels when food resources are low. Squirrels typically collect and pile their food into mounds, so they must protect their stash from intruders looking to steal. High competition for food usually only occurs in areas or seasons where food supplies are limited.

While some squirrels, such as the grey squirrel (Sciurus carolinensis) aren’t very territorial, they will chase other squirrels to establish dominance and show “who’s the boss.” To assert dominance, squirrels will typically chase each other until they catch each other and then fight. Typically the most mature squirrel wins and claims or maintains dominance.

Coming out as dominant can be beneficial, especially during mating season. Females are most likely to notice males who have established themselves as worthy bachelors.

During late winter or early spring, you might see male squirrels chasing females around. Usually, this is more slow-paced, where the male is following the female as part of the mating process.

Females will emit specific scents and vocalizations when she is in a reproductive state. The attracted males from various territories will follow the female to determine if she is ready for mating since females’ bodies are usually “ready” for only a few hours.

Female squirrels will also run from males to see who can catch up to them. Males who can keep up are typically considered sustainable partners. In this chase right before mating, you might see them running after each other through fields or around tree trunks.

You may also like:  13 Examples of Animals With Curly Horns 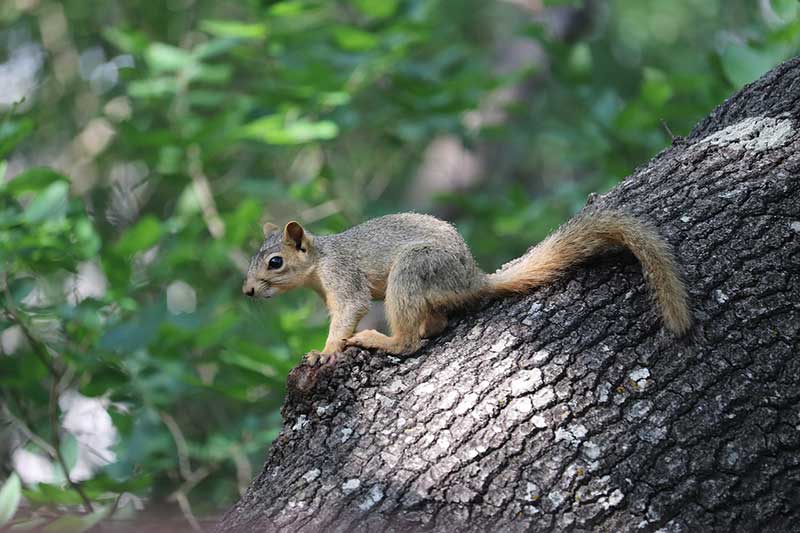 Chasing each other for fun is usually when two young squirrels run after each other and “play fight.” This is similar to the behavior you might see in kittens or puppies. These types of playful chases won’t result in fights after the squirrels catch each other. However, they do sometimes playfully nip at each other.

Young squirrels will also playfully chase each other to help themselves develop essential skills for survival in the wild. Most squirrels need to be able to climb trees quickly and jump from branch to branch to survive, especially when escaping predators. Running around and balancing on different trees or fences lets them develop their strength and coordination. The more they can practice these skills in a less-threatening scenario, the better they will be.

Squirrels are curious creatures that are most active during the day. As young, they are also quite playful with each other when growing and developing essential skills for survival. Their characteristic bushy tails help them balance when running and jumping as well as help them communicate. Most tree squirrels live alone as adults. However, some species share their nest sites or have a communal space.

Within communities, you can find some squirrel species forming dominance hierarchies, where males carry out aggressive actions to show who is in charge. Squirrels can also be territorial, especially if they live in only one location and need to protect their food resources. Two very territorial species include the American red squirrel (Tamiasciurus hudsonicus) and the northern flying squirrel (Glaucomys sabrinus).

Mating and reproduction are also important aspects of a squirrel’s lifestyle and come with elaborate rituals. Females will typically have babies twice a year, and each litter will have 3 to 5 young. Knowing these basic behaviors of squirrels, read on to find out how their natural behaviors contribute to their habit of chasing each other.