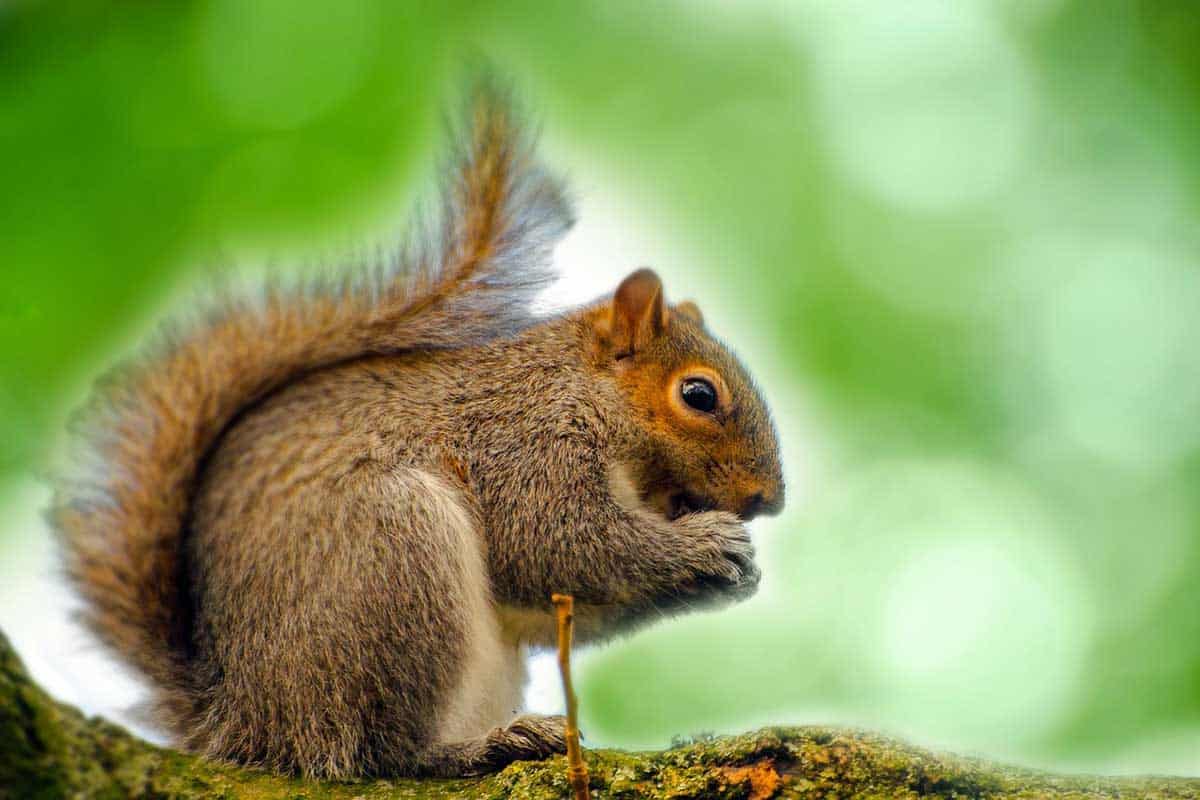 Squirrels live in forests, city parks, and around the trees of our neighborhoods. Combine this with the fact there are over 279 species worldwide, it’s no surprise they are a common tree-dwelling animal we see jumping from branches. If you watch a squirrel closely, you might have seen them waving or shaking their fluffy tails. Why do squirrels shake their tails? Read on to find answers to this question and more about squirrel behaviors and how they use their tails.

Why do squirrels shake their tails?

Generally, squirrels will shake their tails when they are upset, startled, or frightened. For example, if you get too close to where their babies are. It’s also a signal to warn other squirrels danger is near and to be on their guard. However, squirrels will only do this for predators on the ground. If the danger is from the air, they will try not to give away their location with rapid movements or chattering.

Sometimes squirrels also shake their tails back and forth as a defense mechanism. For instance, if they come across a rattlesnake, this quick movement of their big fluffy tails makes the squirrel appear bigger and confuses the snake. Other reasons why squirrels shake their tails include:

How do squirrels use their tails?

A squirrel’s tail comes in handy in more ways than communicating danger and attracting mates. Squirrels use their tails like rudders to help steer them when they jump so that they can make safe landings.

It also acts as a parachute to slow their momentum during falls and contributes to soft landings. As they approach the ground or next tree, squirrels use their tails to distribute their weight, so there’s less impact on their bodies. This is why they can fall from over 90 feet without injury.

Their fluffy tail also protects them from the elements. In the winter, they will wrap their tails around themselves for warmth. In the heat or rain, they can use their tails for shade or protection from the rain.

Another cool fact is, squirrels can heat up their tail by sending extra blood to it, so it emits infrared energy. This comes in handy when they come across rattlesnakes since it sends the snake into a defensive mode instead of predatory one.

Can a squirrel survive without a tail?

Yes, they can. However, squirrel tails don’t grow back, and without one, they are more at risk in the wild. The squirrel can have a shorter lifespan since they no longer have their tails to communicate danger, balance, or regulate their body temperatures.

It’s more common than you may think for a squirrel to lose its tail. Their tail can get stuck on fence boards or between branches and rip off. Sometimes squirrels lose their tails when they fight with a predator.

What does it mean if a squirrel stares at you?

Squirrels are bold and curious creatures that don’t always run away when you approach. It’s common to see them stare at you instead. Sometimes they observe you to see if you’re a threat or try to decide if they should approach you to investigate why you’re making similar sounds to them.

You may also like:  How To Attract Tree Frogs To Your Yard (7 Tips)

If a squirrel is familiar with you and you’ve fed them in the past, they can sometimes stare at you for a meal, similar to how dogs stare when begging for food. Sometimes a squirrel isn’t staring at all, and they are simply napping. These animals sleep with their eyes open so it can appear like they are staring at you.

Why do squirrels lay flat on their belly?

Squirrels will lie flat on their bellies for various reasons, from hiding from danger to trying to cool down. When they lie flat against a tree branch, they blend in and hide their lighter bellies. This position also protects their vital organs if they are attacked, making it the safest position for them to sleep or rest.

When squirrels lie on a cool surface, it helps dissipate their body heat and cool them down. Lying on their bellies helps their blood vessels be closer to the cooler surface. The transfer of body heat to the ground that occurs is known as “heat dumping.”

Why do squirrels tap their feet?

Squirrels tap their feet for similar reasons why they may shake their tails. They will make a thumping sound with their feet to signal a predator is near or to defend their territory against other squirrels. The foot-tapping acts as a non-verbal way of saying “back-off.”

Tapping their feet is also a signal that mating is about to happen or is being demanded. Sometimes squirrels will tap their feet to help their mates locate them. This action lets couples signal to each other they are close by and still interested.

Squirrels will shake their tail for multiple reasons ranging from communicating danger and defending themselves to trying to attract a mate. Although they can survive without a tail, their life expectancy is much lower since they rely on their tails on a daily basis for balancing, temperature regulation, and more. With these answers to common questions about their peculiar behaviors, now you know what you’re witnessing when you watch a squirrel in the wild.