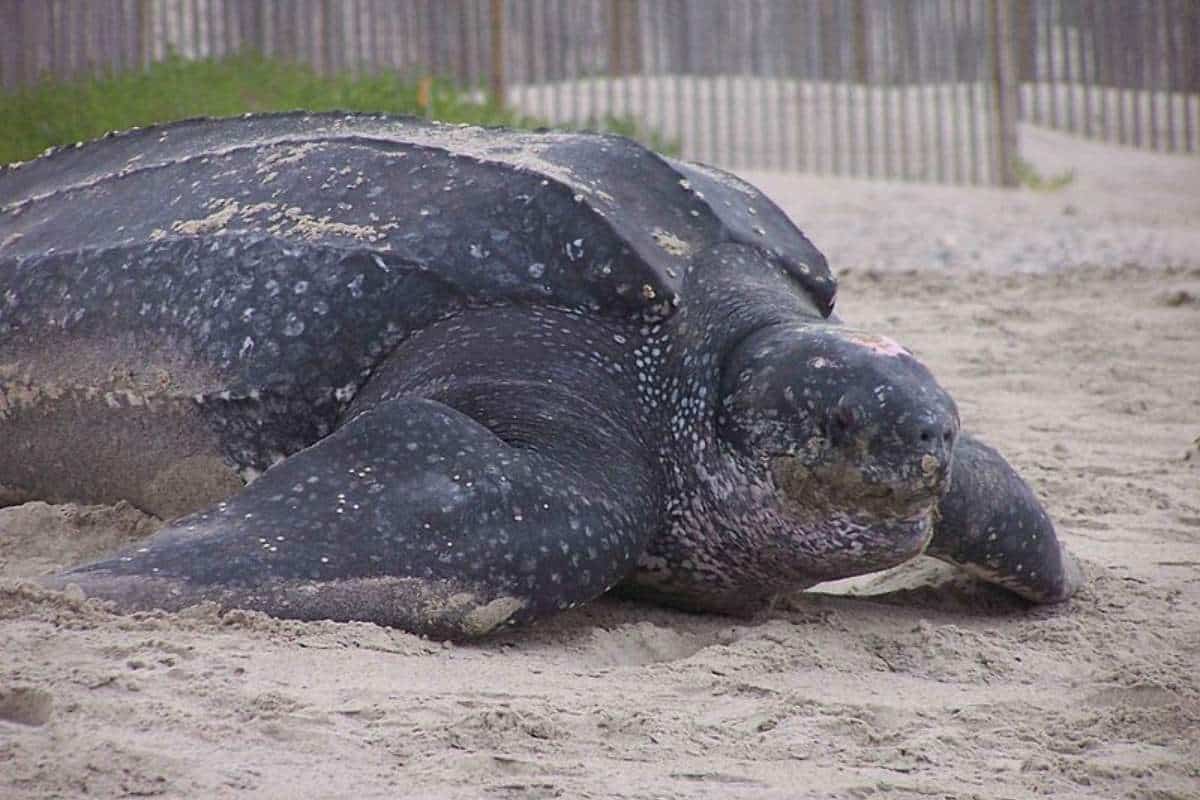 Leatherback sea turtles are the largest of all the turtle species and are one of the largest reptiles in the world. In fact, they are the heaviest of all reptiles aside from crocodilian species.

These marine reptiles can be up to ten feet long in some cases and can grow to be nearly 2,000 pounds! Despite their large size, leatherback sea turtles have a diet made up of relatively small organisms.

Leatherback sea turtles (Dermochelys coriacea) get their name from their leather-like skin. Instead of a hard shell made out of keratinous scutes, they have very thick, rubber like skin on their back. They are the only species of sea turtle to not have a tough, hardened shell.

Unfortunately, these sea turtles have experienced population declines and are listed as endangered in many parts of their range. They are threatened by being caught as bycatch, being hunted and having their eggs harvested, vessel strikes, pollution and climate change.

What do Leatherback sea turtles eat?

Leatherback sea turtles are omnivores, meaning they consume both plant and animal matter. They are also known as gelatinovores for their preference for eating gelationous prey items.

This includes things like jellyfish, tunicates and sea squirts. They actually have specialized, downward pointing spines in the back of their throat that allow for them to swallow these very soft bodied animals but not for them to come back up.

Leatherback sea turtles also eat crustaceans and seaweed. They do not have the same strong, crushing jaws that other sea turtles have so this really impacts what kind of food they can eat.

How much do Leatherback sea turtles eat?

Leatherback sea turtles eat a lot in a day. In fact, they eat nearly 75% of their body weight in a single day. Considering that they can grow to be nearly 2,000 pounds, this is a lot of food!

They consume over 15,000 calories in a day. Most of their diet consists of jellyfish which can often be found swimming in large aggregations.

How many jellyfish do Leatherback sea turtles eat in a day?

As mentioned earlier, Leatherbacks eat a lot in a day. Jellyfish are definitely their favorite food and they eat many of them.

Researchers in Canada found that Leatherback sea turtles ate an average of approximately 250 jellyfish in a day, but could consume as many as over 650 in a single day.

How can sea turtles eat jellyfish without getting stung?

Leatherback sea turtles and other turtles have special adaptations that allow for them to eat jellyfish without being affected by their stinging tentacles. They have many, tiny, keratinized spikes in their mouth and esophagus that protect them from stinging cells on jellyfish tentacles.

You may also like:  When are Rattlesnakes Most Active?

How do Leatherback sea turtles hunt?

These sea turtles do not chase down fast moving fish, instead they use the movement of ocean currents to take advantage of large groups of prey items. Because jellyfish are not at all strong swimmers, they are easily manipulated by currents.

This often ends up with large groups of jellyfish aggregating in places where deep water comes towards the surface and where ocean currents meet. This is the perfect opportunity for Leatherbacks to make an easy meal of dozens of jellyfish in just a short amount of time.

What type of jellyfish do Leatherback sea turtles eat?

Leatherback sea turtles, like other sea turtles, are unfortunately negatively affected by pollution and debris in the water. It is estimated that over half of the world’s sea turtles have consumed plastic bags that they have found floating in oceans.

Why do sea turtles eat plastic?

Sea turtles, Leatherbacks especially, eat a lot of jellyfish. A clear or opaque plastic bag floating in the ocean can often look like a jellyfish for some sea turtles. Not only do plastic bags look like a meal, but they also may smell similar to a prey item for sea turtles.

This isn’t without consequence though. Sea turtles can actually die from complications later on when they eat a plastic bag. Plastic bags have been known to block intestines or pierce intestinal walls.

Do Leatherback sea turtles have teeth?

But because they have a diet made up of mostly soft bodied animals, they do not need strong, powerful jaws. They have special pointed cusps on each jaw that help them pierce and grab hold of things like jellyfish, squid, and sea squirts.