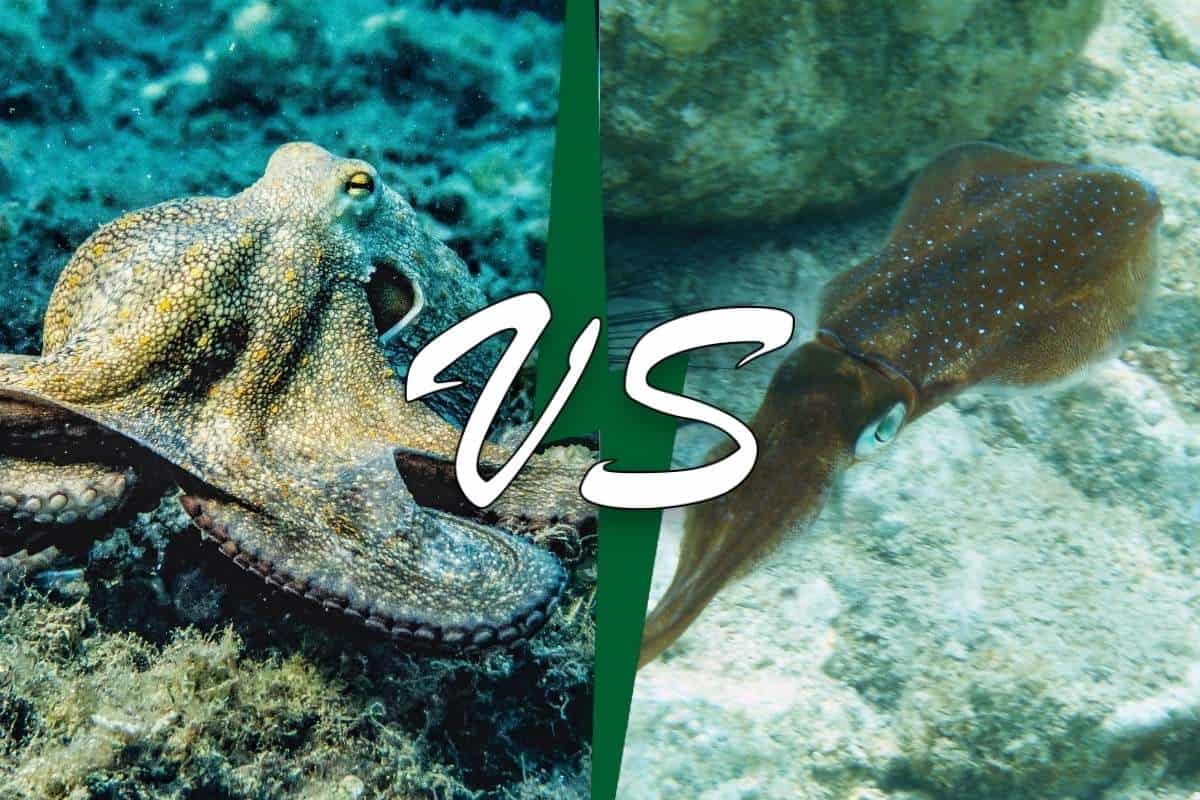 The octopus and squid are two of the most fascinating animals on the planet. Their resemblance does not end with the fact that they both have eight arms and a beak-like mouth. Since these species are related, you will notice many similarities between them, but did you know that they are also very different from one another?

This article will compare the octopus vs. squid so that you can identify them more easily, and know some of the main differences between them.

These two sea creatures are similar in many ways, but they also have many characteristics that set them apart. Continue reading to learn more about octopus vs. squid.

1. Octopuses and squids have different habitats

Both octopuses and squids live in the ocean, but these sea creatures have different preferences for where they live. You can find octopuses in various habitats, including coral reefs and rocky shores, where they spend most of their time in dens

Most of these species can be found at depths ranging from 100 to 150 meters below the water’s surface. Squid typically live in temperate or cold waters at depths of 200 m or deeper, depending on the species.

Some squids live in shallower waters, while others live in the ocean depths. They would also be seen swimming around in the open ocean, unlike the octopus, which typically hides under the rocks on the ocean floor.

2. Octopuses tend to be larger than common squids

Squids are only 24 inches long on average, but they can grow to be quite large at times—the largest known squid was over 40 feet long! On the other hand, Octopuses can vary in size from 12 to 36 inches long, depending on the species. This makes them significantly larger than average squids.

3. Technically, they have different numbers of limbs

While both the octopus and the squid have eight arms with suction cups entirely on each limb, squids have two extra tentacles on the sides of their bodies. In addition to having different numbers of limbs, squids and octopuses also utilize their limbs in different ways.

Squids use their tentacles to catch food and their arms to hold it while consuming their newly captured prey. On the other hand, octopuses use their arms to both catch and hold onto their prey.

Octopuses are solitary creatures and are rarely seen in groups. Only a few species of octopus can be found in groups, such as the pacific striped octopus on Nicaragua’s and Panama’s Pacific coasts.

Squids, on the other hand, interact with one another more than octopuses because they live in groups known as shoals. A shoal is a group of hundreds or thousands of squids who move together as one. This enables them to use their numbers against predators, such as sharks and other fish.

5. Octopuses use venom to paralyze their prey

Octopuses consume small marine creatures, such as crustaceans and small fish, found in their surroundings. Their primary mode of hunting is to hide on the ocean floor until they come across a crab or other small creature that lives there; then, they grab them with their arms and pull them into their beak, injecting venom to paralyze the prey before devouring them.

Small fish and crustaceans are also the main prey of squids. They use their two longer tentacles to stretch out in front of them and catch their prey before grabbing it with their shorter tentacles. To easily consume their prey, they use their beaks to crack open their food’s hard shells.

6. Squids have a shell

Squids have an internalized shell called a pen. The pen is made of two types of materials: chitin and protein, which make it both durable and flexible. A pen is a hard structure that covers the inside of the squid’s mantle.

The pen acts as a protective barrier inside the squid’s body, shielding the soft internal organs from harm. Octopuses lack this protective layer, making them vulnerable to predators.

To avoid being eaten, they camouflage themselves by changing the color and texture of their skin to match their surroundings, or they squeeze into rocks and holes to hide.

7. Their bodies have different shapes

One of the most noticeable differences between the squid and octopus bodies is their shape. The squid is torpedo-shaped, whereas the octopus is rounder. Squids have a streamlined body shape that allows them to move through the water quickly and easily.

Because they prefer to swim in the open ocean, their bodies are shaped like torpedoes (or bullets), so they can outswim their prey or predators. The octopus, however, has a more rounded shape that allows it to fit into small spaces and through narrow gaps between rocks and crevices, which is essential for hiding from predators and escaping danger.

Squids have fins on their mantle to help them with their direction. Squids can move in any direction thanks to these fins, which make it easier for them to move around and navigate their surroundings.

9. Octopuses take care of their eggs

Octopuses are semelparous, which means they reproduce once and then die. A female octopus will lay her eggs and care for them until she dies. She gives the eggs oxygen via her siphon and keeps them clean by spitting water through her funnel.

Octopus mothers protect their eggs by wrapping them to keep predators from eating them while looking for food. In fact, they would stop feeding and concentrate solely on caring for their eggs.

Squids are also semelparous creatures, but unlike octopuses, they do not take care of their eggs. Instead, squids lay them under rocks, crevices, or even on the open ocean, and they don’t wait for them to hatch. The squid’s eggs are gelatinous and float in watery depths for about two to eight weeks before hatching into tiny baby squids.