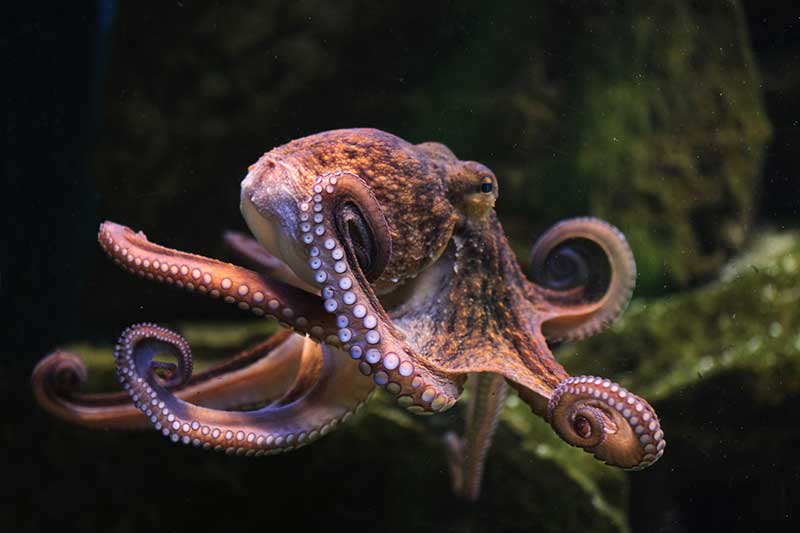 Octopuses and their relatives (squids, nautiluses, and cuttlefish) are strange creatures of the sea. Octopuses are famously known for their eight long arms, covered with hundreds of suction cups that they use to move around and pick things up. Their bodies allow for them to do amazing things, but do octopus have bones? I guess the proper spelling would be, do octopuses have bones?

In this article, we will answer the question on whether or not octopuses have bones in addition to other questions people have about octopus bones (or lack thereof). Read on for more information about the anatomy of one of the ocean’s most intelligent animals.

Do octopus have bones?

No, octopuses do not have bones because they are invertebrates. Invertebrates are all animals that lack a vertebral column or spine and other bones.

There are many different types of invertebrates, such as insects, crabs, snails, sea sponges, jellyfish, worms, and animals found in the cephalopoda class such as squids, cuttlefish, nautiluses, and octopuses.

Why octopuses have no bones

Since octopuses are invertebrates, they lack any bones or spinal column. While not having bones may sound like a drawback to us humans, it actually gives octopuses an advantage. They have adapted to life without bones and are amazing animals.

Octopuses are able to squeeze into spaces that would otherwise be impossible if they had a skeleton. By having no skeleton, octopuses are able to be extremely flexible and contort their body in unimaginable ways. This is perfect for squeezing into cracks and crevices to hide and even find food.

How do octopus move without bones?

For many animals, bones are crucial for providing support for our bodies that allow us to move around. So how do octopuses do it?

One thing that octopuses have on their side is that they live in the ocean where they can use their buoyancy to their advantage. Although it is the fact that an octopus’s arms are packed with muscles that allow them to move, swim, and use their arms to manipulate objects.

The muscles in an octopus’s arms are similar to the muscles in our tongue. Our tongues do not have bones but are still very strong and can move and stretch without any problems. 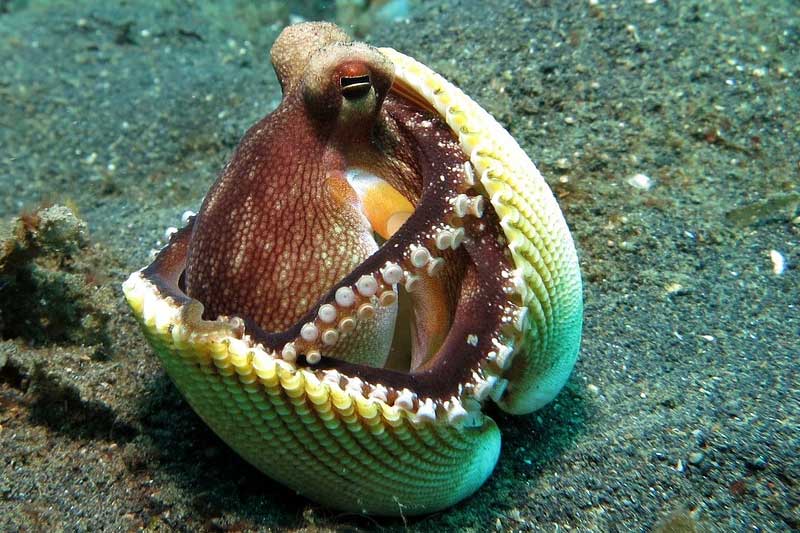 Do octopus have teeth?

Octopuses lack almost any sort of rigid or hard structures in their body, including bones and teeth. However, octopuses do have a beak. But octopus beaks aren’t actually made out of bone, but are instead made out of a strong material called chitin. Chitin is also the material that makes up the exoskeleton of many insects.

All cephalopods have a beak like structure that they use to crush their food. They are essentially like the jaws of an octopus and resemble the beak of a parrot and are sharp, hooked and very strong.

Octopuses use their very strong chitinous beak to crush food. They have also been known to use their beak to bite people that have picked them up and harassed them.

Octopuses also have something called a radula. Octopuses, other cephalopods and mollusks all have a tongue like structure covered in tiny, hooked denticles which are essentially super small teeth. The radula is used to help break down food before ingesting it.

You may also like:  Is an Orca a Whale or a Dolphin? (Explained)

Squids have extremely sharp teeth covering their radula that can slice up their food while octopuses tend to rely more on their strong beaks to tear apart food.

Do octopuses have exoskeletons?

The lack of skeletal structure for octopuses has also meant that there are hardly any fossils of octopuses, which makes the evolution of octopuses even more of a mystery.

Are there octopus fossils?

We are all familiar with the discoveries of fossilized dinosaur bones that have allowed for scientists to learn more about how these giants looked like in prehistoric times. Fossil records can also help scientists learn more about the species on earth today and how they differ from their ancient counterparts.

But finding fossils of animals that lack bones is obviously a bit more tricky. Bones tend to withstand the test of time while softer structures and tissues typically do not.

When an octopus dies, the body turns into essentially a slimy mass of dissolved tissues and skin over the course of a few days, that is if they aren’t eaten first by scavengers. You can probably see how this would make finding octopus fossils incredibly difficult!

Octopus fossils are some of the rarest and hardest to find. But miraculously, scientists have managed to find fossils from octopuses that are 95 million years old! These fossils show the presence of eight legs, suckers and even ink.

1. The proper term for more than one octopus is octopuses, not octopi like what is commonly believed

2. Octopuses are actually venomous. Octopuses have venom in their saliva that they use to paralyze their prey. Luckily only one species, the Blue-ringed Octopus is the only octopus known to be deadly to humans.

3. There are around 300 different species of octopuses found throughout the world

4. The biggest species of octopus is the Giant Pacific Octopus. The largest specimen recorded was over 600 pounds and measured 300 feet across in length!

5. Octopuses are incredibly intelligent! In fact they have been known to solve problems, navigate mazes and even make extravagant escapes from their enclosures

Out of all the weird and wonderful animals in the world, octopuses are certainly high up on the list. They have eight arms covered with suction cups that even without being supported by a skeletal system are strong and capable of doing amazing things. One perk of not having bones is that in addition to being incredibly strong and flexible, octopuses can also regrow or regenerate severed limbs!

The fact that octopuses have no bones has made understanding the evolution of octopuses even more difficult, adding to the mystery of these strange creatures. One thing is clear though, octopuses and their relatives are an incredible group of sea animals that captivate and intrigue many, and for good reason.