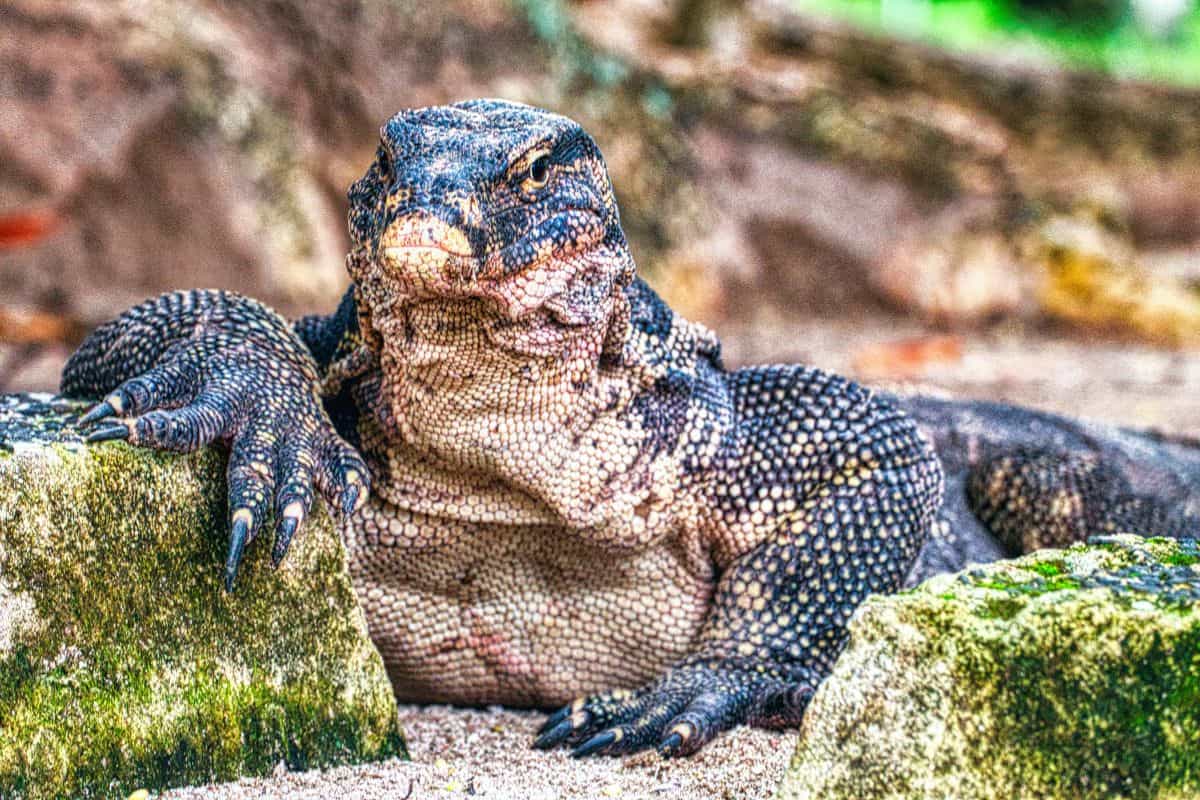 Lizards can be found on every continent except Antarctica. With more than 7,000 known species of lizards in the world, there’s a great deal of variety between different species Just how long can lizards live? Some species, like anoles, only live for a few years, but there are other species that can survive for decades. In the following article we’ll look at some pictures and learn about some of the longest living lizards in the world.

Not only do lizards come in many colors and sizes, but the life expectancy of a lizard can fluctuate based on the species. But how old can a lizard to be? If you’re curious about the lifespan of lizards, you can learn more about some of the longest-living lizard species in the following list.

Also known as the sea iguana, this lizard lives off algae that it forages from the sea. It can only be found on the Galápagos Islands in Ecuador. The marine iguana can breed with another iguana species called the Galápagos land iguana.

Hybrid lizards can sometimes be found in this region. There are many threats facing the marine iguana, including oil spills and predators like snakes, hawks, and feral cats.

This has reduced its average lifespan, but the lizards can potentially live for as long as 60 years. It’s currently considered threatened and is classified as a protected species.

Found in Australia, the lace monitor is a large lizard that can grow to be more than 6 feet long! Most lizards of this species are dark gray, with cream colored bands and markings scattered across their bodies. It’s commonly found in forests and primarily scavenges for food, feeding on the carcasses of dead wildlife.

Typically, it takes around 4 to 5 years for these lizards to fully mature. In the wild, lace monitors usually live for around 10 to 20 years, but they can live to be at least 40 in captivity.

The Argentine giant tegu is found in South America, where it lives in savannas and tropical rainforest. It can grow to be more than 4 feet long, making it the largest type of tegu lizard. Despite its size, it can run at very fast speeds, and is even capable of running on two legs for short distances.

In the wild, these lizards usually live for 15 to 20 years, but they’re known to live slightly longer in captivity. Not only can they be found in zoos, but in some parts of the world, these lizards are actually kept as pets. They’re highly intelligent and can be housebroken with training.

You can find the African fat-tailed gecko in several parts of Africa, including Nigeria, Senegal, and Northern Cameroon. While the coloring of this lizard can vary based on the region it’s found in, it usually measures between 8 and 10 inches when fully grown. It’s able to lose its tail when threatened, which helps it to escape predators.

You may also like:  The 3 Types of Snake Venom (Explained)

This is a hardy lizard that can live for 25 years or more when kept in captivity. In the wild, it has many predators, including birds, snakes, and even larger lizards. These threats reduce the lizard’s life expectancy, cutting into its average lifespan.

The leopard gecko thrives in dry habitats, including deserts and dry grasslands. Even though it’s cold-blooded, this lizard is nocturnal and gets the heat that it needs from rocks. It ranges from 7.1 to 11 inches long when fully grown and has leopard-like spots all over its body, which is where it gets its name,

In the wild, leopard geckos only live for around 3 to 8 years, but they live much longer in captivity. While females have slightly shorter lifespans than males on average, they can still live for up to 20 years. Due to their hardiness and distinctive appearance, many people keep these lizards as pets.

This Australian skink gets its name from its bright blue tongue, which is uses to scare off predators. It can be found in a variety of habitats, and can even be spotted in gardens throughout Northwest Australia. The blue-tongued skink is an omnivore, living off plants, berries, small insects, and snails.

Typically, this lizard reaches maturity around three years of age, but it can live much longer than that. It’s common for these lizards to survive for 15 to 20 years, and in captivity, they can live as long as 30 years!

This semi-aquatic lizard can be found in wetlands and lowland freshwater habitats across Asia. While these lizards are around 15 to 20 inches long when they reach maturity, they continue to grow as they age. The largest Asian water monitor on record was 10.5 feet long!

Asian water monitors are one of the most common lizard species in Asia, and they can sometimes be spotted in cities! You can even see them swimming in the water of canals.

In the wild, Asian water monitors are hunted for their skin, leading to a reduced lifespan. Without these threats, they can survive for 25 years or more. However, it needs specific conditions, including a clean enclosure and a suitable habitat, in order to thrive.

Located in the deserts and savannas of Tanzania, the black-throated monitor is a large lizard with dark, mottled scales. It can grow to be more than 7 feet long and can weigh up to 60 pounds. The lizard is a carnivore and is known to swallow its prey whole, especially when it’s kept in captivity.

While these lizards can live for more than 25 years, they need very specific conditions in order to thrive. They require large habitats, which has led to a population decline in the wild. Due to habitat loss and hunting, it’s currently classified as a threatened species.

At first glance, you might think that the slow worm is a snake rather than a lizard! This legless lizard, which is found in Eurasia, has a long, limbless body and smooth scales. When fully grown, it typically measures between 15.7 and 17.7 inches long.

When a slow worm is under threat, it has the ability to shed its tail. While it’s able to grow its tail back, the tail will never reach its original size.

The slow worm can survive for a long time in the wild, living for up to 30 years. However, it can survive far beyond that when kept in captivity. The oldest recorded slow worm, which was kept at the Copenhagen Zoo, lived to be 54 years old!

The Komodo dragon is the largest living lizard in the world, measuring up to 10 feet and weighing as much as 150 pounds. It can only be found on a handful of islands in Indonesia. Due to its size, it’s an apex predator that feeds on a variety of animals, including Javan rusa and carrion.

While habitat loss has threatened existing Komodo dragon populations, they still have long lifespans. It can be difficult to raise Komodo dragons in captivity, but a female lizard at the Calgary Zoo lived to be 30 years old. Under the right conditions, it’s possible that these lizards could live even longer in captivity!

While this venomous lizard has the word “monster” in its name, it moves very slowly and isn’t a threat to humans. It can be found in parts of Mexico and the Southwestern United States. This lizard spends the majority of its time underground or under rocky shelters that provide it with shade.

It typically reaches sexual maturity around 4 to 5 years of age. It’s common for Gila monsters to live for more than 20 years, but some survive far longer than that. The oldest lizard on record lived for 36 years.

The blue iguana is exclusively found on Grand Cayman, which is the largest of the Cayman Islands. It likes bright, rocky habitats and is often spotted near the island’s shores. Including its tail, it can grow to be more than 5 feet long and can weigh up to 25 pounds.

In early 2003, this lizard was close to extinction, but efforts have been made to help the species recover. Today, hundreds of blue iguanas can be found in a preserve located on Grand Cayman. Lizards are bred in captivity and then released onto the preserve.