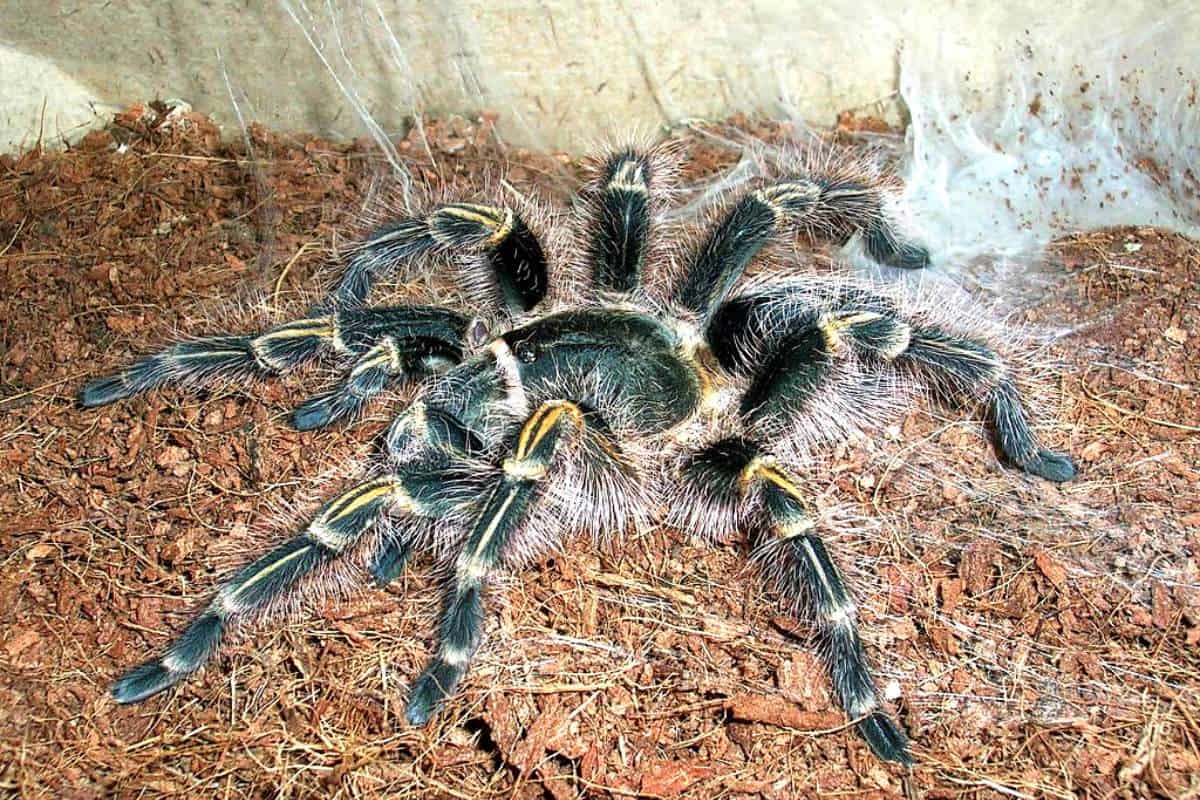 When you think of animals with a long lifespan, it’s unlikely that spiders come to mind. While it’s true that many spiders have a short life expectancy, there are some spider species that can potentially survive for decades. How are some spider species able to survive for so long, and what are the longest living spiders? Usually, bigger spiders have the longest lifespans compared to smaller spiders you can find around your home. Keep reading to learn more about some of the largest and oldest spiders in the world!

Most spiders with long lifespans are tarantulas, but they’re not the only type of spider that has the potential to live for a long time. Below, you’ll discover 12 spiders with some of the longest life expectancies of any arachnid.

This brightly-colored spider gets its name from its bright blue body and legs. It’s one of the fastest-growing tarantula species, with a leg span that can be more than six inches! The tarantula is native to Venezuela, where it usually lives beneath tree roots or bushes.

Female tarantulas are usually larger than males are, and they also have much longer lifespans. A male will typically live for around 3 to 4 years, but the average female will live for 12 to 14 years. Female greenbottle blue tarantulas are sometimes kept as pets.

While the cobalt blue tarantula is native to Myanmar, it can also be found in nearby Thailand. It’s a medium-sized tarantula, with a typical leg span of around 5 inches. Males and females look similar for most of their lives, but after males molt for the last time, they lose some of their bright blue coloring and become tan or brown.

Male tarantulas don’t always live for very long, but both female and male cobalt blue tarantulas can potentially live for a long time. The typical lifespan for a male is around 10 years, while females usually live for around 15 years. These spiders tend to live longer in captivity than they do in the wild.

Trapdoor spiders have large bodies and are closely related to tarantulas, but they’re a part of a different family of spiders. These spiders are most commonly seen in Australia, but can also be found in parts of South America, Africa, and Asia. It’s a hardy spider that usually feeds at night.

While this spider has a shorter lifespan than many tarantulas, the oldest spider on record was an armored trapdoor spider in Australia. This spider, who was known as Number 16, lived to be 43. Surprisingly, this spider didn’t die of old age! She was killed by a wasp sting in 2016.

As its name suggests, this tarantula is native to Brazil and has a solid black body. It grows slowly, but is usually around 6 to 7 inches when fully grown, with some spiders growing to be 8 inches! Although it may look intimidating, it’s a docile spider, and it will usually flee if it senses a threat.

You may also like:  19 Examples of Animals With Fangs (Pictures)

Also known as the Chilean rose tarantula, this spider can be found in the deserts of Chile, Argentina, and Bolivia. While it’s capable of digging its own underground burrows, it sometimes makes its home in burrows that were abandoned by rodents or other animals. Male spiders have an average leg span of 3.5 inches, with females averaging around 5 inches.

This spider is popular with hobbyists and is one of the most commonly seen tarantulas in pet stores today. Males usually pass away after mating, giving them a typical lifespan of 5 years. Females can live for at least 20 years and may be able to survive for even longer in captivity.

The Goliath birdeater makes its home in South America and is considered to be one of the largest spiders in the world. Its leg span can be as high as 12 inches, and its body can measure up to 5.1 inches. Even though it’s called a birdeater, it isn’t known to eat birds and feeds on worms and amphibians instead.

It takes this spider around 3 to 6 years to mature, and males die not long after reaching maturity. Male spiders die of natural causes, and aren’t killed by females after mating. Females can live for much longer in the wild and can potentially live for over 25 years when kept in captivity.

Found in the grasslands of Paraguay and Argentina, this spider’s name comes from the bright yellow markings along its legs. Its leg span can be as large as 7 to 8 inches. In addition to its long legs, it has large fangs that it uses to pierce through the insects and small lizards that it likes to eat.

It’s common for males to live between 6 and 7 years, but they can live up to 10 years in captivity. Females in captivity usually live around 20 to 25 years and have the potential to live longer if properly cared for.

Found in Costa Rica and Nicaragua, this large, plump spider is covered in long, curly bristles. This spider is mostly nocturnal and likes to ambush prey like insects and small reptiles after night falls. It grips its prey between its front legs and uses its fangs to poison and paralyze it before feeding.

Male curly hair tarantulas usually live for around 9 to 10 years, but females can live up to 25 years. In the wild, habitat loss has threatened the survival of this species, which is why most long-living spiders live in captivity.

This North American tarantula can lay up to 1,000 eggs in its lifetime! While its name refers to Oklahoma, it can be found in other parts of the southern United States as well, including Texas and Missouri. It’s commonly seen in these regions and can reach leg spans up to 4 inches.

For males, the average lifespan ranges from 7 to 12 years, though some males live for less than a year in the wild. Females can live for more than 30 years and may have a lifespan of over 40 years in captivity.

First recorded in 1897, this large brown spider is native to Mexico and is most commonly seen in and around the Pacific Mountains. Its leg span is usually between 5 and 6 inches long, and it typically weighs around 0.5 ounces. This is a burrowing spider, and it spends the majority of its life underground.

These spiders reach sexual maturity around 6 or 7, and male spiders can live for several years past that. In the wild, it’s common for females to live for 20 years, and in captivity, the typical lifespan is 25 to 30 years. It’s known for its docile nature and is a popular pet.

This East African tarantula can be found in Kenya and Tanzania. Although it grows slowly, its leg span can reach 7.9 inches once it’s fully grown. It uses its large back legs to dig burrows underground.

While it isn’t fatal to humans, it’s known to have an incredibly painful bite. The king baboon spider can take up to 10 years to reach maturity.

Males live between 10 and 15 years on average, while females typically live 25 to 30 years. It can potentially live longer in captivity, but due to its aggressive personality, the king baboon spider isn’t usually kept as a pet.

You can find the Texas tan tarantula in Southeastern Texas and Northern Mexico. With a typical leg span of 5 to 6 inches, this is one of the largest spiders in all of North America. Female spiders can lay hundreds of eggs at once and protect those eggs by weaving a sac made of silk.

While it’s rare for males to live more than 10 to 15 years, female spiders can live for more than 40 years. There’s limited research into the lifespan of these spiders, and it’s possible that they can live even longer, especially when they’re kept in captivity.