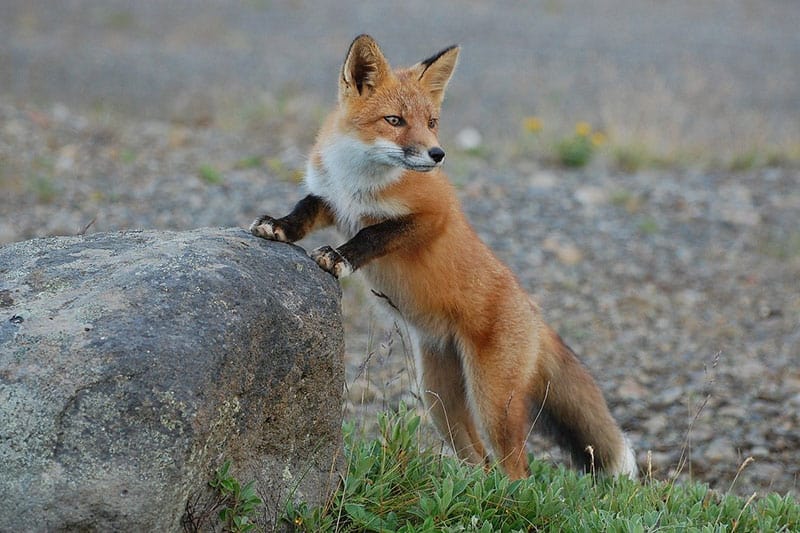 Foxes are some of the most adaptable animals in the world. They can eat a huge variety of food and live in many different environments. This means they often feel right at home in urban areas, where they find food easy to come by. In this article we’ll look at the species of foxes in Denver, Colorado. We’ll talk a little about each species and look at some pictures for them as well.

There are four fox species that live in Colorado: the red fox, the gray fox, the swift fox, and the kit fox.

You’ll only find red and gray foxes in Denver, and sighting a gray fox there is unusual because they’re not as comfortable in an urban environment. But, foxes sometimes cross paths with humans and there are some things you need to know if that happens.

First let’s learn a little bit about these species of foxes, then more about where you can spot them around Denver and in Colorado. Also what to do if you encounter one.

Red foxes are the most common fox that you’ll see in the city, and the most widespread fox in the world. They can be found throughout much of North America, all of Europe and a most of Asia, too. As the name suggests, these foxes are usually red in color, but they can also be silver or black. All red foxes have a white tip on their tail.

These foxes are incredibly adaptable and feel right at home in urban areas. They can eat nearly anything and so cities are full of easily available food for them. They’re very vocal animals, and their vocalizations are surprisingly cat-like. Quite often red fox vocalizations are misinterpreted as cats fighting.

It’s illegal to feed foxes in Denver, for good reason. Foxes that get used to being fed by humans can quickly become aggressive. If there are foxes in your neighborhood, just leave them alone. They don’t pose any threat to you or your pets. They tend to use the same dens for several generations, too, which means that if they’re left alone you can enjoy observing these beautiful creatures for years.

Foxes hunt small rodents and insects, which means that, as long as they don’t get used to humans feeding them, having foxes around can actually be beneficial because they’ll control pest populations.

The gray fox lives throughout most of the United States, but it’s less common than the red fox, especially near urban areas. It’s similar in size but can be easile distinguished by it’s gray color, black facial markings and the black stripe down it’s back.

Gray foxes are unique in their ability to climb trees, and they favor heavily wooded areas while red foxes like more open habitat. In fact, they often build their nests high up in trees. They hunt small rodents and rabbits, but they also eat more plant matter than red foxes do.

Where to See Foxes in Denver

If you live in a suburban area, you might have foxes living in your neighborhood. Look for red foxes in park areas where they’re more like to dig a den. They’re most active at dawn and dusk, so these are the best times to look for them.

You can also look for them in state parks near the city, and you’re even more likely to spot red foxes (and gray foxes) there. Keep an eye out for paw prints: red foxes has a distinct, chevron shaped pad on their hind-feet that makes their tracks distinctive. Look for gray foxes in wooded areas in these parks, especially in the early morning and evening.

What to Do if You See a Fox

All foxes are fairly shy and prefer to avoid humans when possible, so if you spot one be careful not to scare it off. Stay quiet and don’t make sudden movements. Just be still and quietly watch the foxes go about their business.

Don’t try to entice them with food. People often offer food to foxes to try and draw them closer, but this is a very bad idea. It’s also illegal. Foxes that get used to being fed by humans can become aggressive and will lose their fear of humans. Red foxes can carry diseases like rabies, so you should always use caution around them.

There are two other species of fox in Colorado: the swift fox and the kit fox. You will never see these around Denver, as they’re quite rare. Kit foxes, in fact, don’t live east of the Rockies, so to see them in Colorado you’ll have to head to the Southwest corner of the state.

Swift foxes live in the open prairies of eastern Colorado. They’re nocturnal, rare, and very hard to find. They’re also small and fast, so traveling to the prairie just to try and observe them is probably a bad idea. Finding one in the wild is incredibly difficult.

How to Keep Foxes Away

Red foxes can quickly become a nuisance if they discover that your garbage can is full of food scraps, or if you leave food out for your dogs or cats. These opportunistic animals can and will eat any food they can find.

Fortunately, there are several easy, safe methods of deterring foxes, and foxes are smart animals that will quickly learn to avoid your yard. Ammonia is a powerful deterrent, and placing ammonia-soaked rags in your garbage can will turn foxes away. You also buy commercially made fox deterrents that work well.

Foxes are beautiful and fun to watch. Playful ones may even play with domestic pets. They’re one of the few wild animals that can truly thrive in urban environments, which means that finding foxes in Denver is easier than many people might imagine.

Just remember that, if you do see a fox, it’s a wild animal. Don’t feed it, don’t pet it, and don’t try to get it to come closer to you. Just leave it be and enjoy watching it go about it’s business. You and the fox will be have a much more pleasant encounter this way.