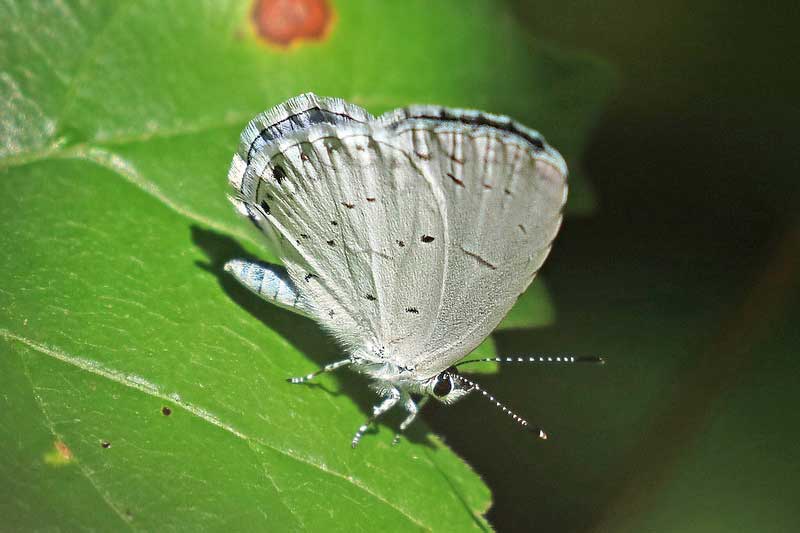 There are over 100 species of butterflies in Wisconsin. Although these insects are abundant, Wisconsin does not have an official state butterfly. With that said, they’re most known for their Monarch population since the state is in their migration pattern.

With such a wide variety of butterflies, you’re likely to see any of the following most common butterflies on your next visit to Wisconsin.

15 types of butterflies in Wisconsin

The Monarch is widely distributed around North America but migrates into Wisconsin in May to roost. It’s most common to see these butterflies around Lake Michigan, the Wisconsin River, or the Mississippi River.

Monarchs are distinguishable by their orange wings that have unique black veins running throughout with intermittent white spots. You’re most likely to find Monarchs on Milkweed plants in open areas, where they lay their eggs.

The Mourning Cloak has one of the longest lifespans of any butterfly species, living 11 to 12 months. It’s most common to find them living in hardwood forests, and you’ll spot them by their distinct and unique markings. The butterfly usually has a maroon-colored wing with black and light blue spots lining the outer portion of both wings, finished with a beige outer edge.

The Eastern Tiger Swallowtail is predominantly found from the spring to fall when breeding in North America. Their name comes from the yellow and black-looking tiger stripes on their wings. Females have a band of blue spots that cross their hindwing, making it easy to identify the sex of the insect.

You’re most likely to spot one of these butterflies feeding on the nectar of flowers like daisies or sunflowers.

The Red-Spotted Purple is easy to spot due to its low flying nature. This butterfly generally only flies two to three feet off the ground and usually walks on leaves. Females look the same as males in their markings but have larger bodies. Both sexes have black to blue wings with white bands. Some butterflies will even have red spots, but this is not sex-determining. The species breed from April until October, so you’re most common to see butterflies in the spring after the caterpillars have hatched.

The Coral Hairstreak is a brown to gray color across both wings. When looking closely, you’ll notice red to orange spots spanning the outer edge of the wings. You’re most likely to spot this species in brushlands such as overgrown fields with taller grass and thickets. One of their favorite plants is the butterfly weed during springtime.

The Dreamy Duskywing is most often spotted from April until early July in Wisconsin. The species is almost entirely brown with some white features on the outer edge of the wing, where some light white spots are common. Some of the favorite plants of this species include blueberry, strawberry, and blackberry.

You may also like:  The 8 Types of Hawks in Michigan (With Pictures)

Other Common Butterflies in Wisconsin

This butterfly species is similar in markings to the Monarch. However, you can distinguish between these two species by looking at their size. The Viceroy is smaller than a Monarch, and when looking carefully, you’ll notice that this species has a dark line that intersects through the middle of the hindwing. A feature that you won’t see on a Monarch.

Riverbanks are most commonly where you’ll find the Hackberry Emperor butterfly; however, it’s not unheard of to see this species in upland areas as well. Because they’re attracted to the more moist and humid environments, they’re most abundant in the southern United States. You’re unlikely to find any in the northern half of Wisconsin, and therefore, to spot one of these butterflies, you’ll need to go to the southern part of the state.

The Hackberry Emperor is usually varying shades of brown with white accents. The hind wing has a row of eyespots with green to blue centers that stand out on the mostly earth tone butterfly.

The Aphrodite Fritillary is an orange and black butterfly where the black is generally in a spotted pattern covering all portions of the wings. They’re most commonly seen in July but can be found throughout the entire summer. Their preferred habitat differs as they need open landscapes for nectar collection and open woody areas for mating and larval growth.

The Spring Azure is one of the first butterflies that you can find in Wisconsin during the spring. They’re most commonly in woodland regions of the state and do not hibernate over the winter. This species is a vibrant blue color with a black border around the wing edge. The inside of the wings are usually brighter than the outside; therefore, when they land and close their wings, they may be more challenging to identify.

This variant of the Azure butterfly is lighter in color than the Spring Azure and often observed as more of a gray color than blue. They have a wide black border around their inner wings which can fade into a blue tone. The rest of the wing has white patterning in the form of spots. You’re most likely to find one of these butterflies in forests or wooded regions along the edge of the habitat.

The Silvery Blue butterfly is most common to find in central Wisconsin during May. They’re most attracted to the Lupine blossom and only remain a few feet off of the ground. Therefore, keep your eyes low to spot this silvery butterfly. This species has a thin black line along the outer edge of the wing and often has black spots within the solid gray wing.

This is a more difficult butterfly to spot but, when found, will mostly be in woodlands.

Often only feet off the ground, the Edward’s Hairstreak thrives in areas with oak trees to perch on. They’re also attracted to milkweed for their nectar content. You’ll identify this butterfly species by looking for their brown-gray wings with orange crescents along the outer edge of the wing. Other accents are often white and black, forming rings down the wings.

This species is often confused with the Banded Hairstreak, and unfortunately, they live in the same habitat. This can make it challenging to discern which is which; however, your best option is to check the markings on the wings. Each spot should be separate and surrounded by white rings to be an Edward’s Hairstreak.

This species is widespread in Wisconsin and is most active starting in the early spring. However, it’s not impossible to also find the Clouded Sulphur up until late fall. Their wings are yellow but can vary into orange tones as well. The border of their wings are usually black, and the females have yellow spots within the black frame, which makes it easy to tell between the two sexes.

You’re most likely to find the Clouded Sulphur in open fields and prairies alongside Orange Sulphur.

The Cabbage White enjoys being around plants of the mustard family. They’re ubiquitous butterflies to find around Wisconsin and are even considered to be an invasive species. The most common landscape to see this species is in gardens due to the variety of vegetation growing.

This butterfly has solid white wings with black accents on the front tips of the wings. Males have one spot on the front wing, while females have two spots.