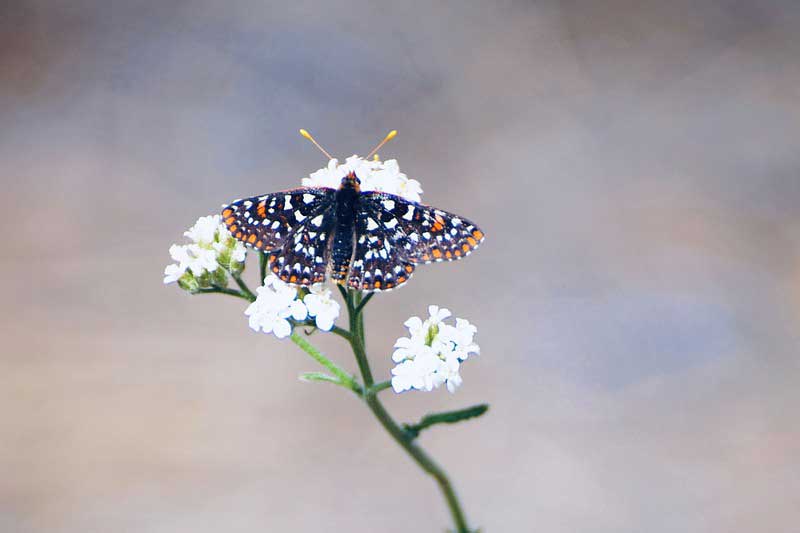 With an estimated 600 species of vertebrates and innumerable invertebrates, Maryland’s biodiversity is significant to the state’s history, present, and future. Of the numerous insect species residing within the state’s borders, approximately 150 species of butterflies and skippers live in the state. The common butterflies in Maryland range in size from small, easy-to-miss flutterers to large, elegant insects that captivate the eye. Maryland boasts numerous types of habitats, allowing for diverse butterfly populations.

Let’s look at bit closer at some of Maryland’s butterflies, shall we?

8 common types of butterflies in Maryland

Below is a list of 8 of the most common well-known species of butterflies in the state of Maryland.

It may be no surprise that this beautiful butterfly is the state insect — one of the state’s most well-known cities is its namesake. With a wingspan ranging from 1.75 to 2.75 inches, the checkerspot is moderately sized. Unsurprisingly, the state insect is a looker! Dusty black wings boast orange crescents along the outer edge and rows of creamy white spots reaching inward. Its black abdomen sports rows of small, white spots from tip to thorax.

The caterpillars are equally as striking, with burnt orange bodies covered in small, spiny black tufts. During pupation, caterpillars create their decorated chrysalis, which is white with small orange protrusions and black markings.

Sadly, the Baltimore Checkerspot is one of many endangered species in Maryland; this beautiful insect’s population has dwindled to only a handful of known areas within the state. Once thought to feed exclusively on white turtlehead (Chelone glabra), science has found the caterpillars feeding on false foxglove (Agalinis sp.) in drier areas, adding hope regarding this species’ resilience.

The black swallowtail is a common visitor in parklike areas with abundant open space. With a wingspan ranging from 2.75 to 3.5 inches, and occasionally up to 4.5 inches, they’re large enough to catch the eye. While in flight, humans are able to see the bold yellow spots on both males and females, along with the iridescent, nearly powdery blue markings. Females’ blue markings are much more prevalent than in males.

Several species of elfin butterflies and other hairstreaks reside in Maryland. The frosted elfin’s wingspan is only 1 to 1.25 inches, definitely playing into their common name. Their bodies are brown and reddish-brown, with lighter markings, and dark compound eyes stand out against their lighter heads.

Hind wings have a scalloped appearance and white scales which give them frosted appearances. This species prefers open woods and fields where its host plants grow; known host plants are all in the pea family (Fabaceae), particularly Baptisia and Lupinus.

“Fritillary” is a common name of a group of butterflies and flowers, both named for their checkered appearance. Both males and females are pale orange on the outside of their wings; females boast a more distinct pattern of pale orangeish-brown with dark, almost black color on the back half of their wings.

The great spangled fritillary is among the most commonly seen due to its large size: adults have an average wingspan of 2.75 to 4 inches. Caterpillars are nocturnal, feeding on violet leaves during the night and hiding under the leaves during the day.

The American lady, sometimes called the painted lady or painted beauty, boasts a vibrant orange color with distinctive black and white markings. The abdomen is a vibrant orange, blending seamlessly with the wings. At rest, the viewer is treated to the beautiful, bright pink spots and muted browns, blacks, and whites on the underside of the wings.

Caterpillars vary in color, but all boast spines with orange or dark red bases. Caterpillars have an unusual habit of creating a web-like structure around their food; they hide inside the webbing and leaves during the day and come out when it’s darker to feed.

The Olympia marble, sometimes referred to as the Olympia marble-wing, is found throughout most of the US east of the Rockies. In Maryland, this delicate butterfly resides in the western part of the state.

The top of the wings is primarily white with darker markings near the edges; at rest, when the wings are up, this dainty butterfly boasts a yellowish-gold marbling effect on the underside of its wings. Adding to its unique appearance are yellowish-gold compound eyes — a striking contrast against the stark white head.

Another butterfly of many common names, the eastern comma is also known as the hop merchant butterfly. Unlike many other species of butterflies, one of this species’ greatest attributes is its ability to remain inconspicuous. Living deep within the woods, this brown, mottled butterfly resembles a dead leaf.

Its wingspan tops out at 2 inches, lending greatly to its ability to blend in. Why is it called the comma? The underside of the hindwing boasts a silver comma-shaped marking! Fun fact: One of its closest relatives is the question mark butterfly.

Males are yellow to yellowish-orange with dark brown margins; females, on the other hand, boast purple-to-dark-black coloration with pale spots on the upper wings. Like other skippers, the Zabulon flies rapidly from perch to perch.