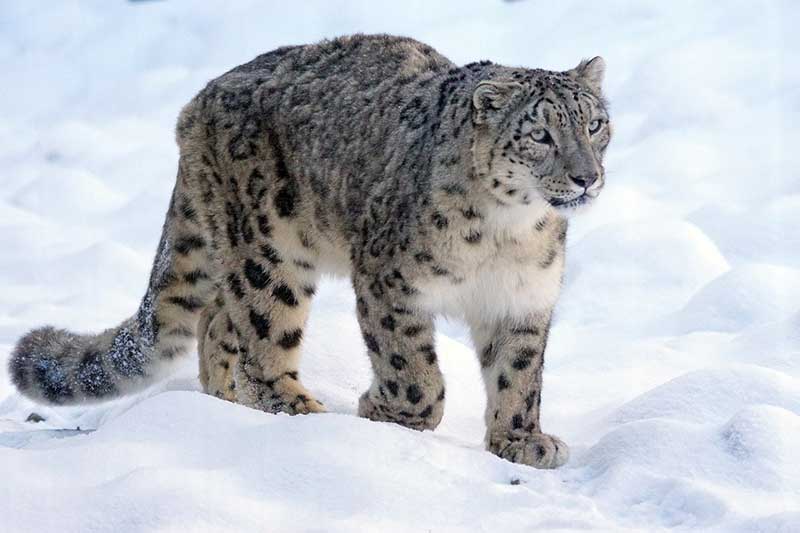 Snow leopards are incredibly beautiful animals that have evolved to live in one of the harshest climates in the world. These apex predators have captured the hearts of people all across the globe with their beautiful fur, fluffy feet, and cute faces. While they may look cute and cuddly, these predators are capable of amazing feats of strength when hunting and defending their territory. In this article, we will go over 15 interesting facts about snow leopards, from what they eat to how they live.

1. What is the snow leopard’s closest relative?

Snow leopards get their names from their spots and rosettes that are similar in appearance to African leopards. However, these cats are actually more closely related to tigers. Tigers and snow leopards are thought to have evolved from the same ancestor roughly 2 million years ago. Tigers ended up in lower elevations and tropical climates and snow leopards became the kings of the mountains.

2. How big are snow leopards?

While they give the illusion of being large, most of their size is fur. These animals actually weigh less than many house dogs, with young adults and small females weighing around 60lbs and males maxing out at around 120lbs. They are an average of about 2 feet tall, and 4-5 feet long, not including their 3-foot tails. This makes them the smallest big cats in the world. 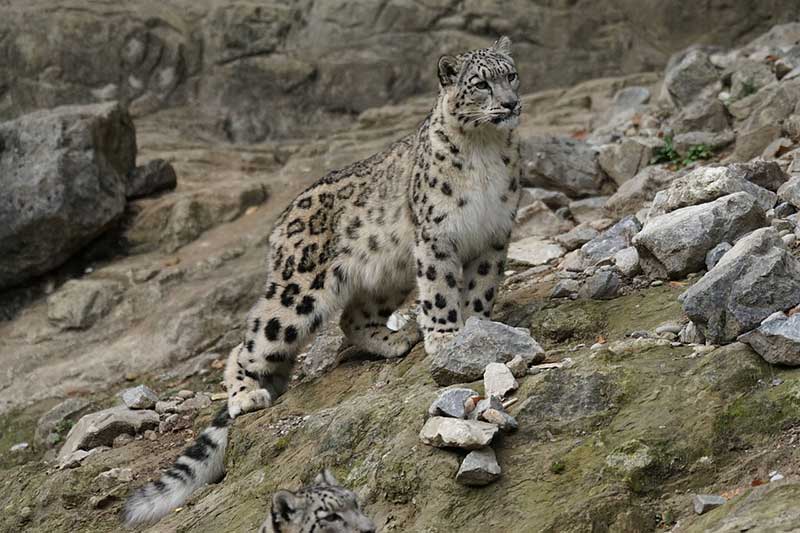 Snow leopards are native to alpine and subalpine areas in the mountains of Central Asia. Most notably the Himalayan Mountains. They are often referred to as the Ghosts of the Mountains due to their impressive ability to disappear among their surroundings with their camouflaged coats.

While you may not think of snow leopards as migrators, they do travel to different elevations in the warm and cold seasons. Once the weather warms up, the snow leopards move up the mountain to elevations around 10,000-20,000 feet. When it turns cold again, they make their way down the mountains to around 4,000 feet.

5. When are snow leopards most active?

Snow leopards are naturally crepuscular, which means they are most active at dawn and dusk. However, they will adapt to the availability of prey and the presence of humans. When humans are in the area, snow leopards will often begin hunting at night.

6. How do snow leopards hunt?

Snow leopards prefer to hunt their prey from above and chase them downhill. They can leap over 50 feet forward and 20 feet high, leaving most prey animals unable to escape.

7. What do snow leopards hunt?

Snow leopards prefer to hunt large herbivores like ibex, mountain goats, and mountain sheep. Animals that can often be 2-3 times their size! However, when prey is scarce, they will also go after smaller animals like rabbits, voles, and birds. 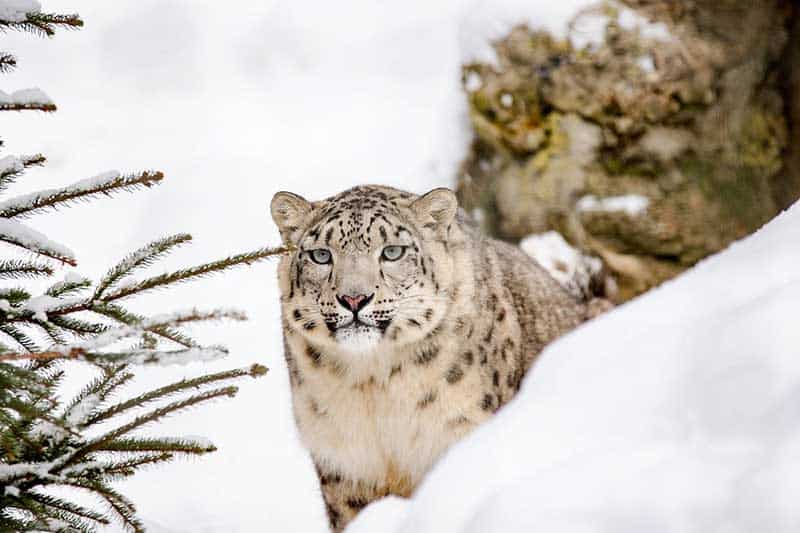 When hunting is good and snow leopards are able to bring down large prey, they will usually go 1-2 weeks between hunting forays. They will store their prey in the snow and return to it to feed until the carcass is gone. Then they will go out hunting again.

You may also like:  20 Interesting Facts About Burmese Pythons

9. Do snow leopards live in packs?

Like their cousin the tiger, snow leopards are solitary animals. The only exception to this is mothers and babies who can stay together for up to 22 months.

10. How many babies do snow leopards have?

Female snow leopards reach maturity at around 3 years old and that is usually when they have their first litter. Each litter consists of an average of 2 babies but can be as many as 5. Babies stay with their mother until they are around 2 years old and then they venture off on their own to find new territories.

11. How long do snow leopards live?

On average, snow leopards live 10-15 years. They don’t have any natural predators as adults, but they do often fall prey to poaching and are suffering from habitat loss.

12. How many snow leopards are there in the wild?

It’s unknown how many snow leopards there are in the wild, as about 70% of their habitat remains unexplored. Scientists are able to estimate based on their known density in explored areas and believe their numbers to be somewhere around 4500-8000.

13. How many snow leopards are there in captivity?

There are close to 600 snow leopards in zoos across the world. This captive population is managed through the species survival program which is working to make sure the snow leopard is around to stay. The organization helps zoos to find the best potential mates for animals in their care to keep the gene pool as diverse as possible. 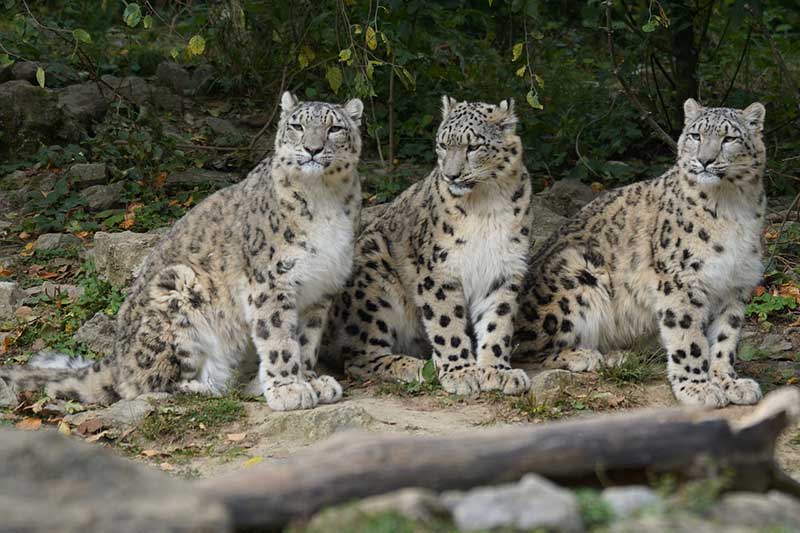 Snow leopards are considered vulnerable by the IUCN or International Union for Conservation of Nature. This Switzerland-based organization is responsible for compiling data on habitats across the world and the animals that live in them. They then give each animal a designation which are in order of gravity, extinct, extinct in the wild, critically endangered, endangered, vulnerable,  near threatened, and least concerned. Scientists then use these classifications to prioritize resources and protect at-risk species.

15. What are the biggest threats to snow leopards?

The two most significant threats to snow leopards are climate change and habitat loss. While these majestic animals make their homes in mountain ranges, each individual needs a relatively large territory to live and hunt. As humans expand, so do farms and towns. Lots of human activity scares away prey and causes snow leopards to go after farm animals like yaks, sheep, and goats. Farmers will then kill them to protect their livestock.

Climate change is also threatening their habitat. As the snow and ice in their region melt their coats are no longer able to help them blend into their surroundings, making hunting and evading humans harder.

Poaching is also a significant threat to snow leopard populations, with several hundred killed each year for illegal trade. Their bones are used in traditional Asian medicine and their pelts are sold for high dollars on the black market.