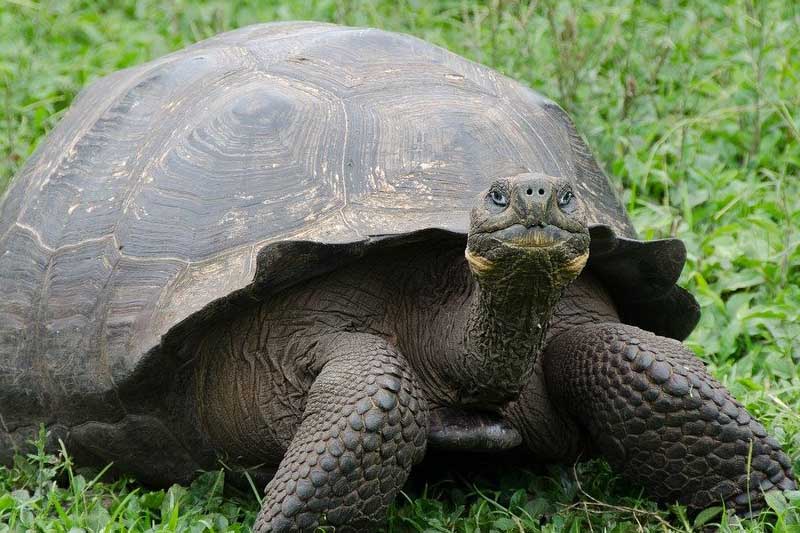 The giants among tortoises, Galápagos tortoises, are impressive-looking, nearly pre-historic animals. As their name suggests, you can find them in the Galápagos Islands in the Pacific ocean off the coast of Ecuador. While they aren’t the fastest, you might be surprised how far they’ll travel despite their speed. Learn more details with these 20 facts about Galápagos tortoises.

1. They are the largest tortoises in the world

Male Galápagos tortoises can grow up to 6 feet long and 5 feet wide and weigh almost 600 pounds. Females are typically smaller, weighing up to 300 pounds. The biggest tortoise recorded was 880 pounds.

2. There are two types based on their shell

There are two main types of Galápagos tortoises, and more than a dozen sub-species. The largest, weighing over 500 pounds, are called “domes” due to their round, big shells. These types typically live on humid and wet islands.

The smaller kinds are called “saddlebacks” because of their shells curling up in front like a saddle. These species live on more arid or dry islands and the raised rim on their shell helps them extend their neck to eat off low-hanging branches and bushes.

3. Their shells are part of their skeleton

While cartoons depict tortoises popping out of their shell, these tortoises can’t do that. Their shells can’t be removed and a part of their skeleton. It acts as the main defense since the tortoise will pull their legs and head inside when frightened.

4. Galapagos tortoises are creatures of habit

These tortoises have set habits and prefer to stick to their routines. They will nap, eat, and travel at the same times each day and along the same routes. Threats from predators or weather changes are typically the only things that will make them break their habits to survive.

5. The islands are named after the tortoises

Galápagos comes from “galapago,” an old Spanish word meaning “saddle,” which explorers used to describe the tortoise’s shells. People used to ride the tortoises when they first discovered the island. However, it’s bad for the tortoise to be ridden and illegal now. 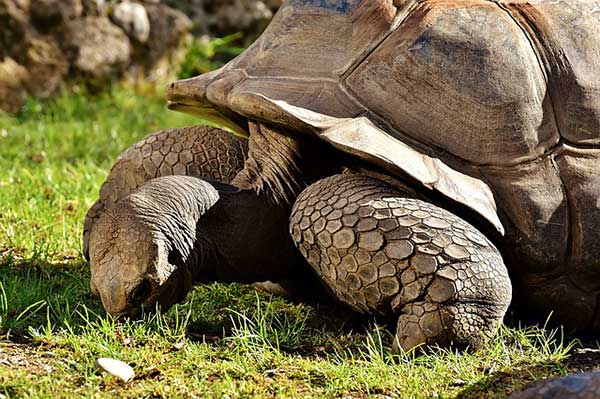 6. The lifespan of a Galapagos tortoise is over 100 years

In the wild or captivity, Galápagos tortoises live on average over 100 years, with the oldest tortoise recorded living at over 170 years. For example, an individual tortoise called Harriet lived in captivity for at least 175 years.

Although Galápagos tortoise shells look heavy and solid, they are actually made up of air chambers shaped like honeycombs. The thickness varies between 1/8th to 0.25 inches and their shells can weigh between 5 to 25 pounds.

8. They have a unique way of fighting

Although “fighting” might not be the best word to describe it. Galápagos tortoises confront each other by glaring, opening their mouths, and raising their heads as high as possible. The tortoise with the highest head wins and the loser will slink away with his head tucked. This means that even smaller tortoises can win if they have long necks.

You may also like:  14 Facts About Shoebill Storks (They Look Prehistoric!)

10. They are impressive nappers

These tortoises spend plenty of time laying around in the sun on beaches or rocks. On top of sleeping at night, they also spend several hours napping during the daytime for a total of 16 hours of sleep daily.

11. Galapagos tortoises can go a year without eating

Or drinking! Galápagos tortoises can survive long periods without food or water because of their slow metabolism. They will slowly break down their body fat and produces energy and water as a byproduct.

When they do eat, they are herbivores, meaning they don’t eat meat. Their diet consists of leaves, grass, fruit, vines, and cactus, especially prickly pear cactus. 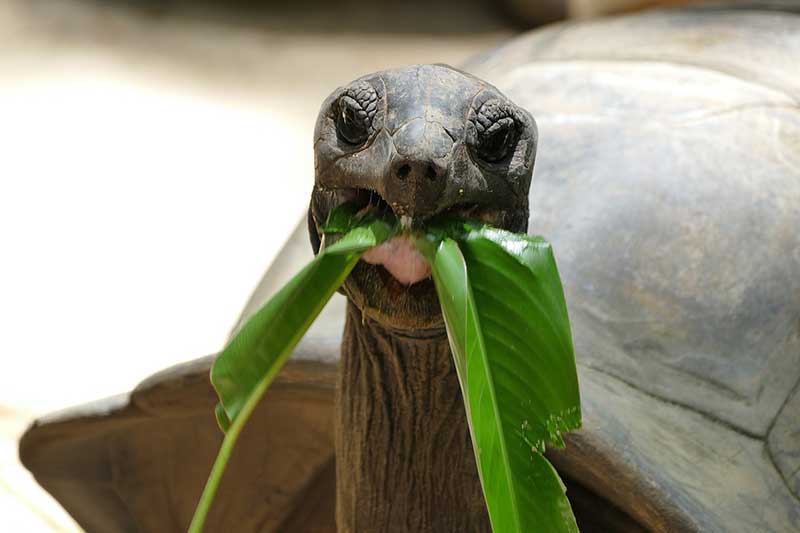 These tortoises can lay up to 16 eggs, and depending on the temperature of the sand, there can be more males or females born. Warmer sand leads to more females hatched and cooler sand produces more males.

Female Galápagos tortoises will bury their eggs around 12 inches deep, cover them with sand, and then pee over the sand. By wetting the sand, she ensures the sand won’t collapse on the eggs. Once the babies hatch, they have to dig their way out – a process that can take up to one month. But don’t worry, they can feed on their yolk sac that lasts up to 7 months to survive during this time.

15. They have scoots and scales

These tortoises have scaly, dry skin and hard scales on the front of their legs. They also have skirt-like edges on their shell called scoots. Interestingly enough, their scoots and scales will wear down over the years.

16. A Galapagos tortoise will travel 4 miles to lay eggs

Although not fast walkers, females will travel around 4 miles to find a suitable location to lay eggs. Their average walking speed is between 0.16 and 0.18 miles per hour. However, the fastest Galápagos tortoise recorded moved up to 0.5 miles per hour.

Adult Galápagos tortoises have no fear of other animals in their natural habitat as they have no natural predators, contributing to their long lifespans. However, babies do have threats. Galápagos hawks often prey on newly hatched tortoises and eggs.

18. All 13 species are likely to become endangered

Despite adults having no natural predators, Galápagos tortoises are a vulnerable species with some types on the edge of extinction. There were once 13 different species of Galapagos tortoise on the islands, 2 are now extinct and all are either threatened or endangered.

Their population declined over the years mostly because people used to hunt them for their meat. Pigs, goats, dogs, cattle, cats, and rats recently introduced to the islands also eat their food and threaten their eggs.

You may also like:  Ball Python vs Corn Snake as Pets - Pros and Cons to Each 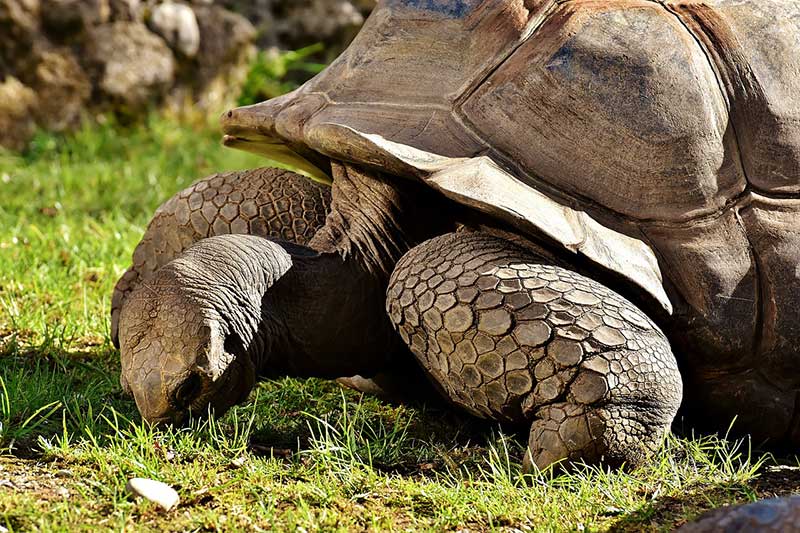 19. Their undershells reveal their gender

20. The tortoises disappear for 5 years

While we know how they hatch, conservationists still aren’t sure where the baby tortoises go after they dig themselves up from the sand holes. They will disappear for around 5 years, returning after they are about 20 inches long and too big to be carried away by the Galápagos hawk. These mysterious years are known as the “lost years.”