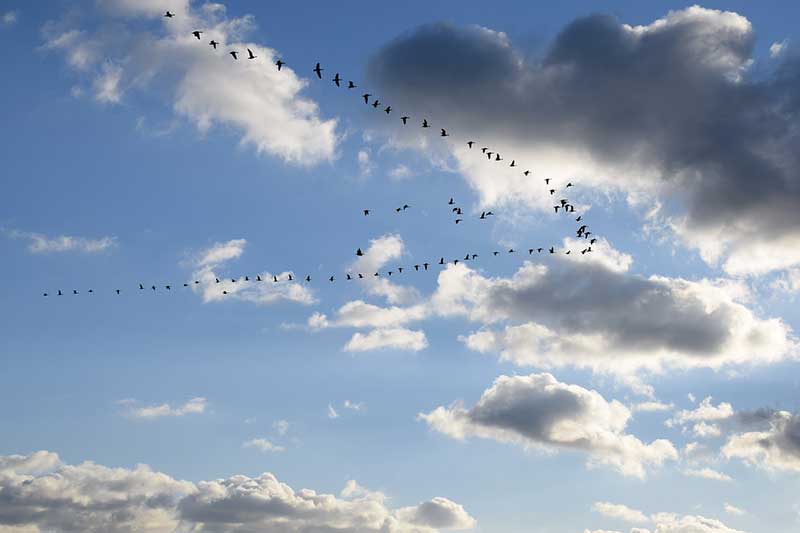 If you’ve watched migrating birds like geese flying, you’ve probably seen their recognizable v formation. In fact, almost every bird species that flock flies this way. But, why do geese fly in a v with one side longer than the other? There must be a reason for it… and how do they decide who leads the formation? Read on to find out answers to these questions and more!

Why do geese fly in a v with one side longer?

Geese fly in v formation to conserve their energy during long migratory flights. They do this by using the slipstream created by the bird in front of them to make it easier to fly. You can often see one side longer because of crosswinds. It is harder for birds to fly on one side when there are crosswinds, making the harder side to fly on shorter. The strength of the wind can also determine how wide the v-shape is.

Since each bird is focused on maintaining optimal position behind the bird in front’s wingtip, they are also really less concerned about how symmetrical the v formation looks. Some people refer to one side being longer as a “J” echelon formation.

Why do geese fly in a V formation?

Catching these high-pressure vortexes generated from the birds in front of them helps them improve their lift when flying. However, a position directly behind the leader will be low pressure, so the ideal location is slightly above and to the side by the wingtips of the bird in front of them. This is why you see birds flying in v formation instead of a straight line.

What happens when a goose falls out of formation?

Usually, when a goose falls out of formation accidentally, it will quickly get back into formation after feeling the resistance and drag without the lifting power of a bird in front. However, if the bird falls out of formation due to sickness or a wound, it will head towards the ground. Usually, two other geese will follow it down to provide help or protection. They will stay until the goose can fly again or dies. Then they will launch out to try and catch up with the group.

How do birds decide who leads the V?

There isn’t only one bird that leads the way during the entire flight. Contrary to some beliefs, the lead bird isn’t the flock leader or alpha bird. It’s just the one with the temporary wind duty. The leader will have less benefit from the added high-pressure that supports lift since they are not behind another bird. 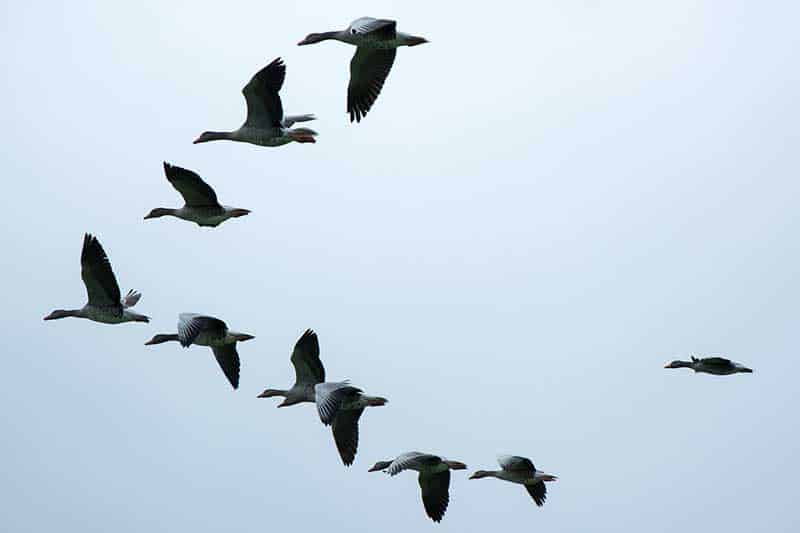 Birds, such as geese, will take turns leading the formation. Once the leader gets tired, they will rotate to the back of the formation and another goose will take the lead position. By taking turns, they can all fly for longer periods before needing to stop for rest.

You may also like:  32 Birds of Prey in Montana (With Pictures and Facts)

Why do geese fly at night?

There are three main reasons geese fly at night. One is because there are fewer predators, such as hawks, eagles, and falcons, roaming about, so it’s safer for them to fly long distances at night.

Second, the cooler air at night prevents them from overheating, especially since they use a lot of energy constantly flapping. Last but not least, it’s easier for them to fly at night when there is less heat rising from the ground. The rising heat can cause air movements that act similar to turbulence, preventing the geese from having smooth flights.

How far do geese migrate?

Geese can fly between 2,000 and 3,000 miles when they migrate. Using their v-formations, they can cover up to 1,500 miles within 24 hours. Their average speed is around 40 miles per hour. However, if they catch a strong wing, they can fly up to 70 miles per hour. They typically migrate twice a year, flying to warmer areas during September or October and returning to their breeding sites during the spring.

Do geese return to the same place every year?

Most do. For example, Canadian geese return to the same breeding sites every year. Their breeding season is between February and April, depending on how cold it is. They usually have nest sites in elevated areas on top of small hills, on islands, in bushes, or in raised areas around lakes.

Most migrating geese breed in Canada or further north in Alaska. They typically settle somewhere in central or southern U.S. states when they fly south during the cold.

Geese fly in v formation during long flights because it helps them conserve energy by using the air pressure of the bird in front to support their lift. This lets them fly longer without needing as much rest. Sometimes these v formations are longer on one side because of crosswinds, while other times, they just aren’t symmetrical because the birds aren’t focused on that. The main point is to be in an optimal position behind a bird in front, regardless of the side of the v.