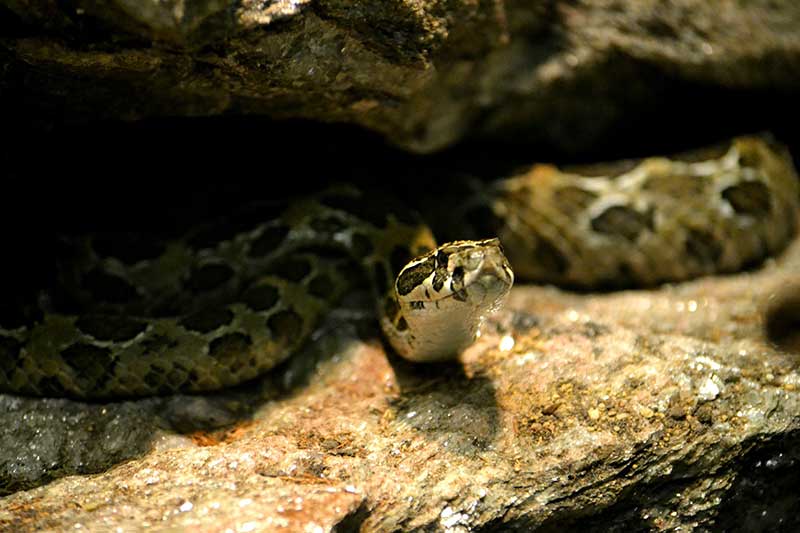 Even if you don’t consider yourself a snake expert, you probably know that snakes are unique in the fact that they are cold-blooded, or in scientific terms, ectothermic. Snakes depend on the external or ambient temperature to regulate their own body temperature. There are species of snakes that live in places or states where it gets very cold, so the fact that they are able to survive these harsh winters is somewhat of a natural wonder. But how do they do it, do snakes hibernate?

First, a little bit about endotherms vs. ectotherms

Ectotherms or “cold blooded” animals (like snakes) are animals that cannot regulate their own body temperature. Specifically, their internal temperature depends on the outside or ambient temperature. This is why snakes bask to warm up and take shelter to cool down.

Both endotherms and ectotherms have special strategies to survive cold, harsh winters.

Technically, no, snakes do not hibernate. But what they do during the winter is very similar to hibernation and is called brumation.

Brumation is when an animal, like a snake, restricts almost any and all movement during the winter months.

During brumation, snakes’ metabolisms nearly grind to a halt. While brumating, snakes stop growing and their physiological processes slow way down. Similar to hibernation, animals that brumate will increase their food intake before the winter to prepare.

Brumation is a way for snakes to survive through the winter, but also helps to prepare snakes for mating and reproduction in the spring. Cooler temperatures may initiate sperm production for males as well as prepare females for ovulation.

Hibernation and brumation are conceptually very similar. Both are important for different types of animals that live in cooler climates that otherwise would not survive the winter. However, there are some key differences between the two.

In general, mammals hibernate and ectotherms like reptiles, amphibians and some fish brumate. This is because mammals and reptiles have different physiological needs and processes.

During hibernation, the animals that hibernate remain in a very deep sleep throughout the winter. During this time, they will not move from their sleeping spot. Their metabolism, breathing rate and body temperature drops. Because their metabolism is so slow, they are able to live off of the extra food they would have eaten before the winter.

During brumation though, animals are not actually asleep, however they move so slowly (if at all) and nearly act asleep. They may move around to find water or to bask in the sun on unusually warm winter days, but for the most part will stay put.

Reptiles typically have slower metabolic rates than mammals, but by restricting their movement it allows them to go even longer without eating during the winter.

You may also like:  4 Types of Water Snakes in Virginia (Pictures)

Examples of animals that go into brumation

Examples of animals that go into hibernation

How long does brumation last?

For snakes living in northern regions, they may spend more than half of the year brumating. For some snakes, brumation lasts as long as seven to eight months!

But length of brumation really depends on the length of the winters, which is obviously shorter in more southern states. Some snakes in these states may not even brumate at all.

Do pet snakes go into brumation?

Yes or no. Brumation is most commonly triggered by drops in temperature, and if you keep your snake’s enclosure at a constant temperature throughout the year, there is a chance that your snake will never brumate.

However, brumation is not necessary to keep pet snakes healthy, so if your snake doesn’t brumate then no need to worry!

People that breed snakes may be more likely to change the lighting and temperature in their snake’s enclosure to induce brumation in hopes to help with reproduction.

What temperature is too cold for snakes?

This question has two answers. Once outside temperatures drop below ~65°F, snakes will start to act and move differently. These temps are “too cold” for snakes to carry on their normal activities.

But typically, Snakes living in northern regions brumate before it gets to this point. But they do need to brumate somewhere that is not exposed to the elements. Snakes will spend their winters in dens or burrows where temp remain higher than outside temps.

If the temperatures in these burrows drop below ~36°F then there is a chance that they will not survive the winter.

Do snakes come out in the winter?

Typically, no. If you see a snake out in the winter months, it could be sick. However, on unusually warm days with ample sunlight you may see snakes on the edge of their dens or burrows, but this is fairly uncommon.

To sum things up, snakes do not hibernate. But they do brumate, which is very similar in fashion and function. Because snakes are ectotherms, they have special biological requirements and their physiological processes are highly influenced by the outside temperatures.

Brumation allows for snakes to survive in places with long and cold winters. Brumation can also be a way for snakes to get ready for the spring to breed and reproduce. Brumation is not just for wild snakes, some pet owners may see their snakes brumate as well.