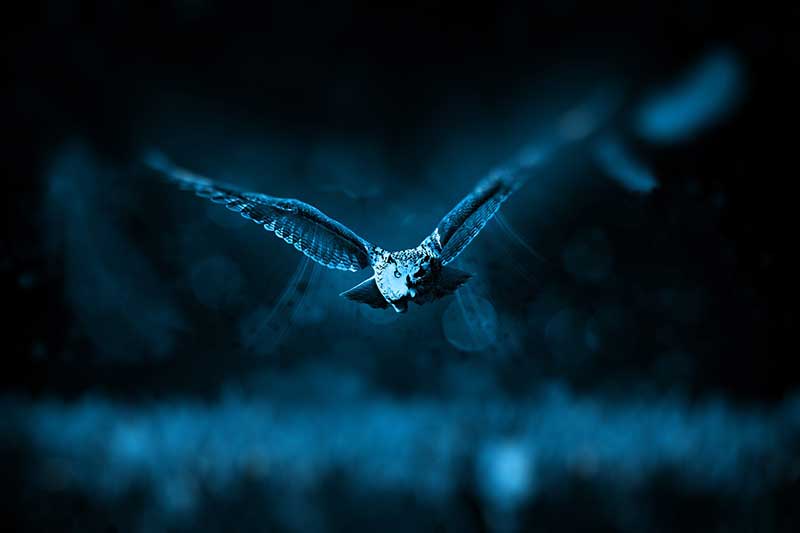 If you are curious if there are birds that fly at night, the answer is yes! Animals active at night are called “nocturnal,” while species that are most active at dusk or dawn are called “crepuscular.” Birds will fly around at night for various reasons ranging from seeking safety during migration to preferring to hunt at night.

While you might be able to hear some of the birds that also sing or call out in the dark, most of these birds’ nighttime activities are hidden from us. Every now and then, though, you may catch some species flying beneath the moon when they migrate.

This article will explore 10 birds that fly at night and where you might catch a glimpse of them.

10 birds that fly at night

Here is a list of 10 birds that fly at night. Let’s learn more about where they are from and why they are active when there’s no sunlight.

Yellow warblers are bright yellow birds around 4.5 inches long and live across northern and central North America. These songbirds are nocturnal flyers when they migrate during the spring and fall.

Nighttime migration is common among birds wanting to avoid predators, such as hawks. However, they still have to be careful of owls and crashing into buildings. To identify these birds singing at night, listen for short clips with a metallic, buzzing, or lisping quality.

Killdeer are interesting birds since they can be active either day or night. Usually, during the non-breeding season and when the moon is close to full or full, you will see them flying around at night, finding food. This is most likely because of the increased amount of insects and the reduction of predators.

These mostly brown birds with white breasts and bellies are a species of the plover, plump-breasted birds. They are the only plover species with two breast bands that you can find in North America. They are typically foraging around coastal wetlands and beaches during the non-breeding seasons after July.

The eastern whip-poor-will is a strictly nocturnal bird and species of nightjar. They mainly hunt at night by resting on the ground or perching on trees before flying up to catch aerial insects, such as moths. They are patterned with mottled gray and brown for camouflage and can be found in forests in the eastern U.S. While hard to see, you might hear them chanting their name “whip-poor-will,” especially during summer nights.

A bird species related to nightjars, the tawny frogmouth is native to Australia, India, and Asia. These big-headed birds with large yellow or orange eyes make them sometimes mistaken for owls. They get their names from the frog-like mouth-opening and flattened hooked bill.

You can sometimes see them resting during the day with their mouths open in case an insect enters. However, their favorite diet is nocturnal insects such as slugs, moths, and worms, making them active fliers at night to hunt. 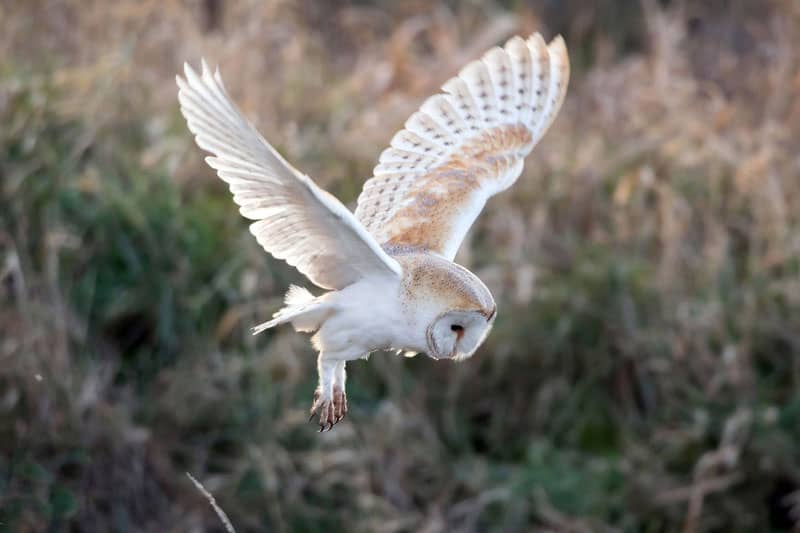 A list of birds that fly at night wouldn’t be complete without mentioning owls. While some owls are more crepuscular, the barn owl is a strictly nocturnal species. These owls are the most common worldwide and can be found throughout the U.S, except for areas with high elevations.

As their name suggests, they will roost in barn buildings but also live in forest edges, farmland, cities, and other open areas. They will fly around at night hunting for food while also making raspy, eerie screeching calls. 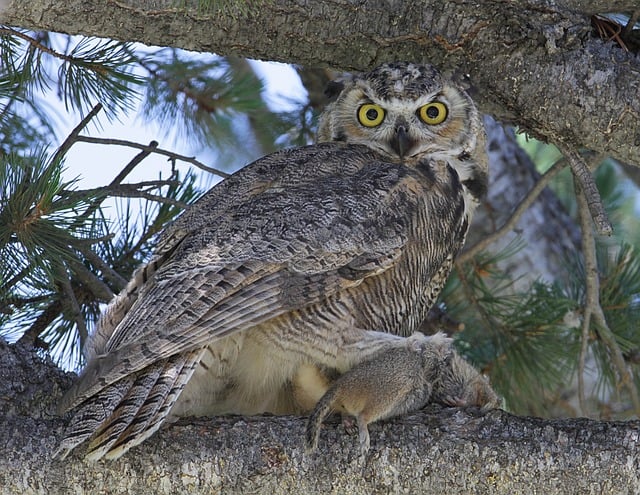 Another strictly nocturnal owl is the great horned owl, which actively hunts at night. These silent hunters will fly low over the ground or even wade in the water to find prey such as mice, rabbits, ducks, or even smaller owls! They use their excellent eyesight and hearing to locate and capture their prey in the dark. You can find these owls throughout North America in various habitats, including forests, deserts, backyards, cities, and grasslands.

The alder flycatcher is a long-distance migrating bird that makes this trip at night. They will typically fly from their breeding grounds throughout the U.S. and Canada to spend the winter in South America. You can find these insect-loving birds flying from alder swamps, lakeside thickets, and forests during migration months.

Northern Mockingbirds sometimes appear never to get sleep. While these birds can be active during the day, they are well-known for singing throughout the night to attract mates and defend their territories. You can see them flying slowly around their territory at night to harass any birds that intrude. These birds are common in Canada, Mexico, and throughout the United States.

The American woodcock is a shorebird most active at night searching for invertebrates, such as earthworms. These birds will also migrate at night, flying at low altitudes around 50 feet. During the day, they will take cover in dense forest habitats.

You can find these birds in various states throughout the U.S., depending on the season. They typically are in Gulf Coast states, southeastern Atlantic Coast states, Georgia, Louisiana, and Alabama during the winter. During the breeding season, they are in states such as Virginia, North Carolina, Illinois, and Kansas.

Nightingales are popular songbirds with powerful singing voices ranging from trills and whistles to gurgles. These birds not only fly at night during migration, but males are known to sing throughout the night. It is believed males will sing at night to serenade any migrating females flying overhead.

You can find them in Europe and Sub-Saharan Africa, where they migrate back and forth depending on the season. While not native to America, some people do keep nightingales as pets.