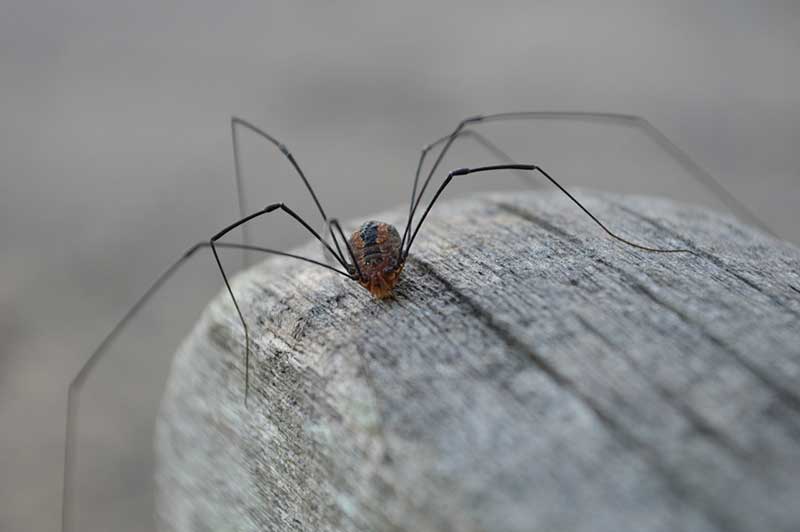 Daddy long legs, more accurately called Harvestmen, are a group of arachnids that look a lot like spiders. Despite the similarity in appearance, Harvestmen actually aren’t closely related to spiders. Urban legends insist that daddy long legs are the most venomous animals in the world (often claiming they’re the most venomous spider in the world.) This led many to believe that they’re quite dangerous, and that they should be avoided or killed. In this article we’ll finally answer the question, are daddy long legs dangerous?

No, daddy long legs are not dangerous. The legend goes that they’re the most venomous animal in the world, but they’re fangs are too small to pierce human skin. In fact, Harvestmen are not even venomous. They kill their prey through completely other means, and the structures near their mouths that resemble fangs are actually small grasping claws. Some species don’t even hunt live prey, feeding mainly on carrion instead.

No, daddy long legs are not poisonous, either. Many species do emit foul smelling and foul tasting chemicals when they feel threatened in the hopes of warding off predators. These chemicals are especially off-putting to many spiders, but they’re harmless to humans. In fact, unless you try to eat one, you won’t even notice these chemicals.

They can bite, but if one were to bite you you likely wouldn’t even feel it. Their chelicerae, the claw-like mouth parts, can certainly pinch. They’re very small, however, and while they can do a lot of damage to the Harvestmen’s predators, a human wouldn’t even notice them. Most of them wouldn’t even try this, as biting is not one of their primary defense mechanisms. They prefer to run and hide when they feel threatened.

Daddy long legs do not attack humans. Some of their actions might be misinterpreted as attacks, however. Often when a large group of them is startled, they scatter. Their eyesight is poor, so they sometimes run directly at a person, and may even begin climbing up their legs. This is not an attack, and there’s no danger. You can simply brush them off and they’ll be on their way. They aren’t interested in attacking you, and they aren’t aggressive at all. They just want to get away and find somewhere safe.

Is it safe to hold a daddy long legs?

Yes, it’s perfectly safe to hold a daddy long legs. You do need to be careful when picking them up- for their safety, not yours. It’s very easy to pull off one of their legs if you try to grab them that they, as it’s a natural defense mechanism that helps them escape from predators. Other than that, there’s nothing to worry about. In fact, holding them may help you to overcome any fears you may have about them. You’ll quickly realize how harmless they are.

Are daddy long legs poisonous to cats or dogs?

No, daddy long legs are not poisonous or dangerous in any way to cats and dogs. It’s fairly normal for pets to eat a daddy long legs if they find one, and while it might not taste great to them, it won’t hurt them. Since they aren’t poisonous or venomous, they won’t cause any problems. You don’t need to worry about any danger to your pets from harvestmen. 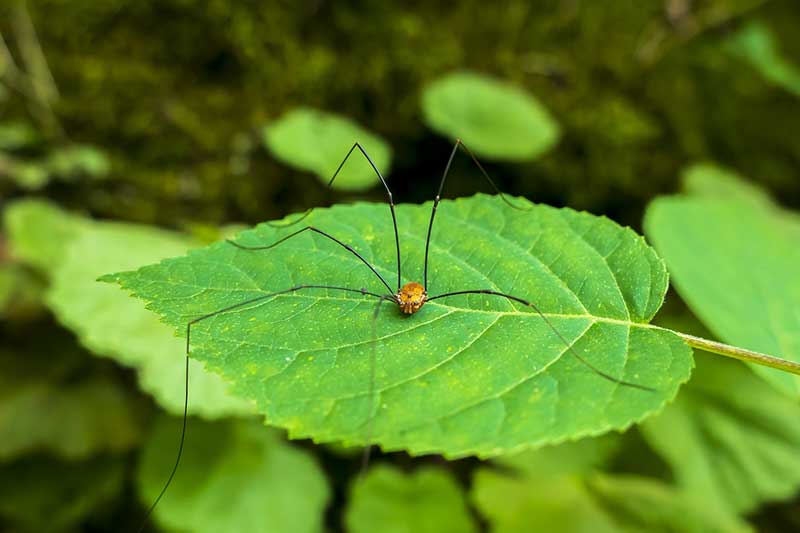 Harvestman are a group of arachnids with over 6,650 species discovered so far. Fossil records show that harvestmen have been around for at least 400 million years, and they’ve remained largely unchanged during that time. This makes them some of the oldest animals on Earth.

They usually have very long legs in relation to their body size, although there are some species with short legs. Their bodies appear to be a single, oval shape, although they do have a thorax and abdomen, but the connection between is so broad that they look like one body part. Unlike most arachnids, harvestmen swallow solid chunks of food, rather than liquefying it and drinking it.

Instead of eight eyes (like spiders) harvestmen have just two. These eyes are very primitive, and they can’t form images. Mostly they just help differentiate between light and dark so the harvestmen can tell the difference between day and night. They use two of their legs as antennae to help navigate around and find food.

Where do harvestmen live?

Harvestmen can be found worldwide, but the greatest diversity of species is found in South Asia and South America. There are also numerous species in colder regions, and North America and Europe both have native harvestmen populations.

Harvestmen prefer humid environments, and especially like living in wooded areas and caves. Some species are found in more open areas, and they can tolerate cold weather, but you’ll see the largest numbers of harvestmen in warm, humid places. In areas where the weather gets cold, they’ll seek warm places to wait out the winter.

You’re most likely to find them in river valleys or near large bodies of water, where the humidity is higher and the vegetation is thicker. They’re largely nocturnal, so during the day they seek out dark places to hide. The underside of picnic tables can work in a pinch, and it’s not uncommon to find them there in riverside parks.

What do harvestmen eat?

Harvestmen eat many different things depending on the species. Some are hunters that track down small insects, while others are scavengers. Many species are omnivores and are able to hunt small insects, feed on carrion, and eat plants and fungi.

Some species of harvestmen even eat bird droppings. Essentially, they eat a lot of the things that you don’t want to have around. Many common garden pests are favorite foods of harvestmen. They also eat dead insects and dead plants, helping to keep the garden clean and recycle nutrients.

Yes, they’re the same. However, both of these names are also used for crane flies and cellar spiders, which can often cause confusion. Harvestmen is a more accurate term for these arachnids. Most people are referring to harvestmen when they say daddy long legs or granddaddy long legs, but since there are at least two other species that are often called by these names it’s helpful to know the real names of all three.

Neither. Harvestmen are arachnids, like spiders, but their they own group. Much like scorpions, mites, ticks, and solifuges. This means they have eight legs and two body segments, unlike insects which have six legs and three body segments. They’re the only arachnids that can eat solid food; all other arachnids can only eat liquids, which means that spiders and scorpions must first liquify their food before they eat.

Should I kill daddy long legs, or just leave them alone?

There’s no reason to kill them. Harvestmen aren’t dangerous at all, and some of them help control the populations of household pests. Even if they aren’t hunting, their diet often consists of rotting vegetation, fungi, and other detritus that you don’t want to have around. They may look creepy, but they’re truly harmless.

Yes, they are. If you garden, aphids are one of their favorite foods, so they could contribute to healthier plants in your garden. They eat other pests, too, and they eat things such as dead insects and bird droppings. Having harvestmen around can generally lead to a better, cleaner environment for you and your family.

Are Daddy Long Legs good for your garden?

Yes, very much so. Aphids can cause a lot of damage to your garden, and they’re one of the favorite prey items for harvestmen. They can protect your garden from dangerous infestations of plant-eating insects, and since they’re harmless to humans, they’re one of the best animals to have around.

Daddy long legs, or harvestmen, have an undeserved reputation as highly venomous spiders. Not only are they not spiders at all, but they aren’t venomous. These small arachnids are one of the few arachnids that don’t pose any danger at all to humans. Most others (spiders, scorpions, ticks, etc) can at least hurt you, and many are downright lethal.

So now when we revisit the question “are daddy long legs dangerous” you know that not only can they not bite you, but they don’t have venom or poison like some urban legends suggest. They’re completely harmless, and since they eat insect pests they’re actually beneficial to have around. Next time you see one, just leave it alone. If it’s in the house, be nice and let it back outside.