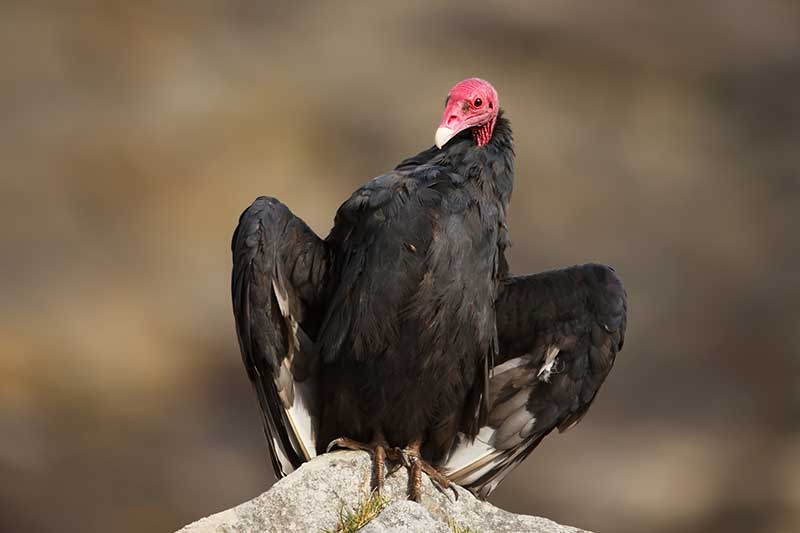 Tigers may come to mind when you’re trying to come up with animals that start with T. While these wild cats don’t live in North America, plenty of other animals do, including those with the words “tiger” in their common name. Find out interesting facts and where to find 20 different species of North American animals starting with T.

20 animals that start with t

Including a species that can shoot blood from their eyelids, animals starting with T in North America come in all shapes and sizes. Some of their names can also be deceiving. Learn more below!

Twin-spotted spiny lizards are native to the Sonoran Desert and the Chihuahuan Desert in North America. They are stocky, grayish-brown to yellowish lizards with light spots and a black collar around their neck. These lizards love to bask and can get quite territorial.

Texas horned lizards are fierce-looking with numerous horns on their head. Besides their horns, their other unique defenses include inflating themselves to seem larger and shooting a stream of blood from their eyelids.

Their range is from the southcentral U.S. to northern Mexico, including Texas, Kansas, and Oklahoma.

Townsend’s big-eared bat, previously known as lump-nosed bats, are brown or pale gray with large ears and fleshly glands on each side of their muzzle.

You can find them in southern regions of British Columbia, down the Pacific Coast to central Mexico, and east to the Great Plains. However, some populations also live in pine forests in central and eastern U.S states.

Turkey vultures are large birds with broad, long wingspans measuring up to 70 inches. They are dark brown with red, featherless heads. Their range extends from southern Canada to South America.

They mainly forage for dead animals by using their great sense of smell. There are only 3 species of vulture in the United States, with the other species being the black vulture and the California condor.

Tarantula hawks live in various habitats throughout North America, including grasslands, desert scrub, rainforests, and semi-arid locations. They aren’t birds, but are a species of wasp known for preying on large spiders like tarantulas.

They paralyze the spiders and drag them to their burrows to lay eggs on them. Their larva will burrow into the spider to grow.

Texas pocket gophers are burrowing rodents known for their extensive burrow systems. They mainly stay underground and will defend their burrows by gnashing their teeth and making wheezy calls.

You can find them in central and southern Texas and northern parts of Mexico, preferring sand-drift habitats along the Gulf.

Tundra voles are yellowish-brown with white underparts and paler sides. You can find them in moist meadows or damp tundra habitats in Alaska and Canada.

These strictly vegetarian voles prefer eating sedges, grasses, and seeds. They are also known to store licorice roots in their burrows for the winter.

Texas antelope squirrels are agile and speedy ground squirrels known to hold their tail over their back when they run. They live in rock crevices or burrows of lowland areas in Mexico, Texas, and parts of New Mexico.

Their diet includes insects and the seeds and fruits of various cactus plants.

Trumpeter swans are the heaviest flying bird in North America, weighing an average of over 26 pounds. Although they have short legs that make them awkward on the ground, they can walk over a mile at a time.

You can find scattered populations in Alaska, western Canada, northwestern U.S., and the midwest or Great Lakes regions. They are known to nest on the dens of beavers and muskrats.

True’s beaked whales are dark gray on the top of their bodies and grow up to 17.5 feet and weigh over 3,000 pounds. They live in the North Atlantic temperate waters and can be found off the coasts of Nova Scotia, Canada.

Tiger sharks are powerful predators swimming at speeds around 20 miles per hour and having strong teeth that can bite through clams or the shell of sea turtles.

They range from 10 to 14 feet long and are grayish to help them blend into murky waters. These common large sharks live in most tropical and temperate waters worldwide, including Florida, California, and the Gulf of Mexico.

Three-toed box turtles are animals with three toes that are olive or brown with three hind toes and a high-domed shell. Their shell is also hinged, meaning they can completely close themselves into their shell.

They live in wooded and grassy areas by water bodies in southcentral U.S states, from Oklahoma and Missouri to Alabama and Texas.

Texas map turtles are olive-brown with yellow lines on each plate of their shell. They are the smallest map turtle species, growing around 4 inches long.

Native to Texas, these turtles can be found only in the Concho, Colorado, and Llano river systems. They prefer habitats with low currents, plenty of aquatic vegetation, and logs and branches to bask on.

Timber rattlesnakes live in various habitats throughout eastern U.S. states, except for Florida. They are either yellow or dark-colored and grow around 3 to 4 feet long.

You may also like:  11 Animals That Eat Ants (Pictures, Facts)

Their venom is a hemotoxin that helps them digest their prey by destroying tissue. It’s also potent enough to kill humans and the skin around the bite will swell and turn black.

Two-striped garter snakes can be found from central California down to Baja California, Mexico. They are an aquatic species that prefer living near bodies of water and feed mostly on amphibians and fish.

These snakes are brownish-gray or olive-brown with dark spots and a yellow stripe on each side. Although they are nonvenomous, their saliva does contain a toxin that helps them capture prey.

Texas rat snakes are non-venomous, large snakes that are semi-arboreal, meaning they are good climbers and sometimes hang out in trees much of the time.

They are a common subspecies of the western rat snake and live throughout southcentral U.S states. These ambush predators hunt and constrict their prey, which includes birds, rodents, lizards, frogs, and squirrels.

The tawny-collared nightjar is a dark-colored bird with mottled brown, gray, and black coloring. They are nocturnal birds that have a clipped and abrupt “tchi-wheeu” song that they repeat rapidly.

Native to northeastern Mexico, you can find them in scrubby, dense woodlands and thorn forests.

Tree swallows are North America’s most common songbirds and their songs consist of chirps, whines, and gurgles. They are white and gray birds with greenish-blue feathers on their back and head.

These birds have a massive range throughout almost all of North America, from Alaska down to Mexico.

Tiger salamanders are patterned with bright yellow or brown stripes and dots against a green, brown, or gray body. They have porous skin they breathe through and the ability to regenerate any detached limbs.

You can find them in southern Canada, throughout the U.S, and in northern Mexico.

The Texas cichlid is an aggressive freshwater fish growing around 12 inches long. They are the only cichlid species naturally occurring in the U.S., with populations mostly in the Rio Grande in Texas.

However, some have been introduced to other river Texas drainages, parts of Mexico, and Florida.