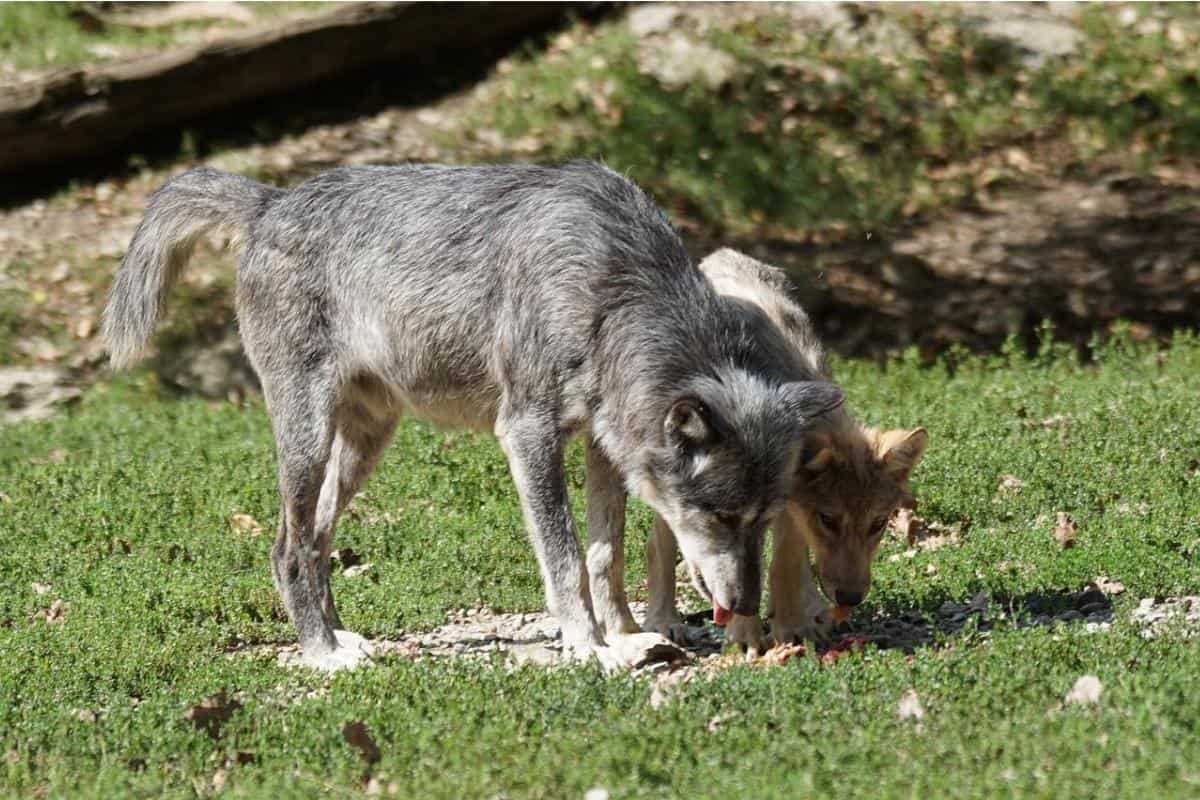 A wolf pack consists of 2- 20 wolves, with the average pack holding between 6-15 wolves. In the pack, ranks are an important part of their society. They play a vital role in the pack hierarchy, dictating the social order and determining the place each wolf holds within the pack, from who is in charge to who is the lowest wolf on the totem pole.

The wolf pack hierarchy is a fluid and ever-changing system, with wolves constantly vying for higher rank through various means such as dominance displays, submission, aggression, and even simply being born into a high-ranking family.

This article will discuss wolf pack ranks and what they mean for wolf society. We will also explore how wolf packs operate, how they’re organized, and how the rank of each wolf affects the pack as a whole.

Alpha, Beta, and Omega. These terms are used to describe wolf packs and their hierarchy. But what do they really mean?

In the wolf world, the alpha wolf is the leader of the group, the beta wolf is the second in command, the mid-ranking wolf is in the middle of the rank, and the omega wolf is the most submissive at the bottom of the totem pole.

Read below for more information about wolves and wolf pack ranks and how they affect wolf society.

The alpha position consists of two wolves, an alpha male, and an alpha female, also known as the Luna Wolf. The two work together to lead the pack and maintain order. The alpha wolf is considered the largest and strongest wolf in the pack and is responsible for protecting the pack, dealing with threats to the pack’s survival, making decisions, and leading hunts.

The alpha wolf also eats first and will have his pick of mates. He may pick a female wolf from the pack with whom he will remain paired. However, he may choose to separate from his mate and find another desirable female to mate with.

Sometimes, the alpha wolf may not necessarily be the biggest or strongest wolf in the pack; rather, he or she may be the wolf that has been able to assert dominance over the others. The alpha wolf maintains his or her position through aggression, intimidation, and physical strength, especially when challenged by a subordinate wolf from his park.

If the alpha is too old or sickly, he may choose to concede when challenged by a younger wolf and leave his pack. And if the alpha dies or he is run off from his pack, the second most dominant wolf in the group automatically assumes the position.

You may also like:  12 Unique Characteristics of Mountain Lions

The alpha female is an essential part of the wolf pack and plays a vital role in its success. She is the only one in the group allowed to breed, and she is responsible for ensuring the next generation’s survival. While the alpha male is the leader of the pack, it is the Luna Wolf who really keeps things running smoothly.

The word “beta” comes from the second letter of the Greek alphabet ( Β, β ), which is translated as B. It’s used to describe someone who comes right after the person at the top or second best. Large packs often have a beta wolf who is the deputy and second in command outside the alpha couple. Typically, the beta position is taken by a male, but it can also be assumed by a female in some cases.

Because the beta wolf is the right hand of the alpha, he walks behind him or right beside him during hunts. As such, the beta often takes over when the alpha wolf leaves the pack or dies. He is responsible for:

The beta wolf typically has a close relationship with the alpha pair; in most cases, he is often their offspring. He will defend them against any threat, even if it means putting his own life at risk. Thanks to this close bond, the beta wolf is privy to a lot of inside information about the pack. This includes things like the location of prey, the best hunting grounds when pups are born and any changes in pack dynamics.

But in smaller wolf packs, there is no distinctive beta, just the alpha pair and the subordinate wolves who fight and jockey for dominance, trying to establish seniority.

Mid-ranking wolves, also known as subordinates, are the backbone of the pack and often the most active members. This rank consists of elderly and respected wolves, the alpha couple’s aunts and uncles, and younger wolves who want to prove their value to the pack.

The mid-ranking wolves are often submissive towards the Alpha and Beta wolves but will take charge in their absence. They are the most likely to participate in group hunts and help care for the pups.

These wolves often work together to help the alpha female care for her wolf pup, teaching them how to hunt and survive in the wild. They also defend the pack from outsiders, go for patrols, and may take on other tasks depending on what is needed of them by the alpha and beta wolves at any given time.

It’s common to see these wolves having small fights among themselves, trying to assert dominance within the group. However, they’re quite loyal to their pack and will do everything to ensure its success.

Omega wolves are the lowest-ranking, most submissive, and timid members of the group, often suffering the most abuse from the other members of the pack. That’s because they are raised to be submissive and timid.

You may also like:  Can a Dolphin Kill a Shark? That Depends...

Omega wolves typically eat last and get the least food, which can lead to malnourishment. They may also be forced to sleep outside of the main den to protect the other wolves.

Omega wolves often have a hard time finding mates because they are at the bottom of the pack hierarchy. They’re also the jesters and often considered the scapegoats of the pack because they can’t fight back.

Although their lives may be tough, omega wolves play an important role in wolf society, by helping to keep the pack together and providing stability. Without them, wolf packs would not be able to function properly.