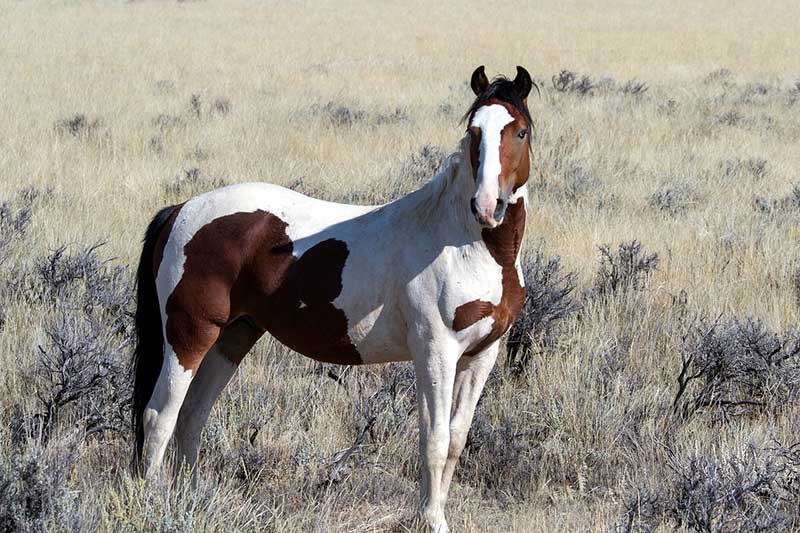 The United States is home to some of the most iconic wildlife – including wild horses. For centuries, these majestic creatures have roamed freely across America’s grasslands and deserts. From their majestic mustangs galloping through the west to the striking Appaloosas that roam the Great Plains, wild horses are an essential part of the American landscape.

In this blog post, we’ll take a closer look at the history and population of wild horses in the United States. We’ll also explore 9 states where you can find wild horses.

9 U.S. States Where You Can See Wild horses

North Carolina is home to two different herds of wild horses, one on Ocracoke Island and another near the town of Corolla, also on the Outer Banks. The Ocracoke herd is estimated to have descended from Spanish Mustangs brought over by early settlers in the 16th century, while the Currituck population has its origins in Colonial-era farming stock.

Both herds are managed by the North Carolina Wildlife Resources Commission, which also works to conserve and protect them. The herds are protected from development or disturbance, allowing them to live a life of relative peace. In addition to providing a unique glimpse into our country’s equine history, both herds offer an opportunity for visitors to observe and take photos of these beautiful animals.

Maryland is home to Assateague ponies. The ponies live on Assateague Island and have been roaming there for hundreds of years. It is believed that their ancestors were survivors of a Spanish galleon that wrecked off the island’s shores back in 1590 and released its livestock onto Assateague Island.

Virginia is home to the counterparts of Maryland’s Assateague ponies—the Chincoteague ponies. The Assateague and Chincoteague o There are over 150 horses that inhabit several islands in Virginia’s seaside town of Chincoteague. The horses are descendants of Spanish mustangs, brought to the area in the 1600s by explorers.

The ponies are rounded up in July of each year for the Annual Pony Penning event, where their health is checked before some are sold at auction. In addition, the Chincoteague volunteer fire department uses funds raised from this annual event to maintain the health and safety of the herd.

Nevada is home to one of the largest wild horse populations in the United States, boasting half of the wild horse population in the Western United States. The horses are protected by the 1971 Wild Free-Roaming Horses and Burros Act, which declared them “living symbols of the historic and pioneer spirit of the West” and prohibited their capture or removal without authorization from federal land.

The wild horses in Nevada live mainly in the Mojave Desert, the Virginia Range, and the Spring Mountains. The Virginia Range herd is the state’s most famous and largest, with around 2,000 horses.

Wild horses have been living in Arizona near the Salt River since before the Tonto National Forest was created in the early 1900s. Today, the Wild Horse and Burro Program of the Bureau of Land Management (BLM) is responsible for managing wild horse populations in Arizona.

You may also like:  Are Black Bears Dangerous? (The Truth!)

The BLM maintains about 500 wild horses across Arizona’s deserts and grasslands. The most popular place to see wild horses in Arizona is the Salt River, near Mesa, Arizona, or at recreational sites in the Tonto Forest.

About 73,000 wild horses currently roam in California, with the Bureau of Land Management in California managing 21 unique herds. Almost half of the wild horses that inhabit California are found in the West Mojave and East Mojave herd management areas. Various government agencies, such as the Bureau of Land Management (BLM) and National Forest Service, manage these herds to maintain healthy habitats for both animals and vegetation.

The BLM also ensures that wild horse populations remain at a manageable level to prevent overgrazing and the destruction of habitats and resources. To this end, the BLM implements some measures, including birth control programs for wild mares, adoption events, and relocation activities.

The unique nature of each herd can’t be overemphasized, from the Chocolate Mule Mountains Herd in the southernmost part of California, brought to California and abandoned by miners, to the Carter Reservoir Herd in the north that was originally introduced to the United States by Spaniards.

New Mexico only has 583 active wild horses in 2 herds; the Bordo Atravesado Herd and Carracas Mesa Herd. The Carracas Mesa Herd appears to be made of horses that are a byproduct of breeding between nearby ranch horses and horses from the Jicarilla Apache Reservation.

This multi-colored horse herd spends its time in mountainous areas of New Mexico. The Bordo Atravesado Herd appears to have been around since at least 1950 and also comes in an array of colors, although this herd of wild horses prefers to spend their time in the rolling hills of New Mexico.

Wild horses in Montana can be found in the Pryor Mountains, home to a Colonial Spanish horse herd. The horses have roamed this area for almost 200 years and are known as the Pryor Mountain Mustangs. These horses are an icon of American history and culture, and they remain untamed despite encroaching modernity.

The herd’s population has been managed by the Bureau of Land Management Montana-Dakota’s since 1968 and it is estimated that there are currently around 120 horses living in this area. Significant conservation efforts are made to keep the population of the Pryor Mountain Mustangs thriving. They do not share a large enough gene pool with any other animal to reproduce outside of their herd.

Colorado is home to 4 distinct horse herds, which are managed by the Bureau of Land Management. These herds include one in the Little Book Cliffs Wild Horse Area, one in the Piceance-East Douglas Herd Management Area, one in Spring Creek Basin, and one in Sand Wash Basin.

The Spring Creek Basin herd has an interesting origin story, with legend saying that the herd descended from stolen horses brought to Disappointment Valley in Colorado by a Montana rancher. As this rancher came close to being caught by the law, he left with some- but not all- of his horses. The ones he left behind gave rise to the present-day Spring Creek Herd.

Q: How many wild horses are there in the US?

A: The exact number of wild horses in the US is difficult to determine, as they inhabit vast areas of land and migrate over long distances. However, it is estimated that approximately 95,000 horses and burros roam freely across the United States- a number the Bureau of Land Management is looking to curtail.

A: Wild horses are generally not considered to be dangerous animals. Horses are very social and will typically shy away from humans if approached.

However, when cornered or threatened, wild horses may become aggressive. It is important to respect their space and keep a safe distance from them if encountered in the wild.

Q: Are there more wild horses in the United States today than there have been in the past?