If you live by a pond or freshwater body, you might have been kept up at night from croaking frogs. The sound can be extremely loud and seem to go on without end. Why do frogs make such a racket? And, why do frogs croak at night? Surely they aren’t just doing it to ruin your sleep. Read on to learn answers to why frogs croak and what motivates them to do it throughout the night.

Why do frogs croak at night?

Frogs croak for two main reasons, to attract mates and defend their territory. You’re most likely to hear them croak after it rains in the spring and summer months. This is because it’s the right time to mate and lay eggs in or by freshwater bodies. Each species has a specific call that males use to signal their location to females.

During the breeding season, males will also find a suitable breeding spot and defend the territory from other males. They will use their calls to try and chase other males away or sometimes even fight each other.

Yes, they do. However, the loud croaks you hear at night are typically males. In most frog species, only the males croak since they defend their territories and try to attract females. In contrast, female frogs will either be silent or make high-pitched, chirpy sounds to add to the male’s sounds in a duet or encourage the males during mating. 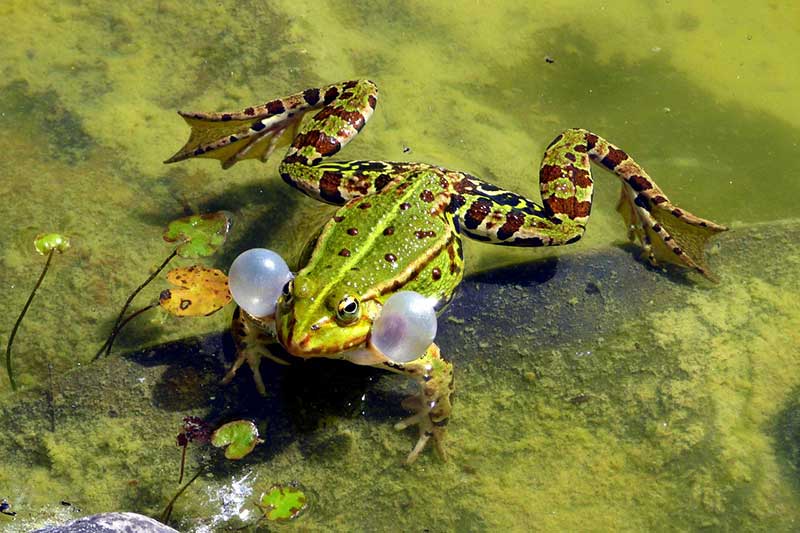 Why do frogs croak some nights and not others?

Since frogs mainly croak when they want to mate, you’ll most likely hear them only during the breeding season. Croaking, chirping, or hooting can be dangerous for frogs because it also advertises their location to predators. So they’ll only make a call when they really need to.

To avoid being seen by predators, frogs typically stop croaking before sunrise or during nights with full moons. You also won’t hear frogs croak during the months they hibernate.

What frogs croak at night?

Plenty of frog species croak at night, and each has their own unique call. If you listen carefully, you might be able to identify what species you are hearing. Here are 4 examples of frogs commonly heard croaking throughout the night:

You may also like:  How To Care For a Bearded Dragon At Night - 6 Helpful Tips!

Do frogs sleep at night?

Some do. Although most frog species are nocturnal and active at night, some are diurnal. Some frogs can also be heard any time of the day or night, such as the Pacific treefrog listed above. Typically, poisonous frogs such as dart frogs are diurnal since they have toxic chemicals to defend themselves from predators. In contrast, frogs that are active at night will hide from predators during the day.

Most frogs are also nocturnal because the air is more humid at night. It helps keep their skin moist so they don’t dry out from the sun’s heat during the day. Frogs can die when their skin dries out because they won’t be able to get enough oxygen or get rid of carbon dioxide.

How do you stop frogs from croaking at night?

It’s normal to wonder what you can do about the loud croaking sound if they’ve kept you up at night. If you live by a lake or other large freshwater body, it may be harder to do anything. Many frogs are protected species, and even if they weren’t, they are important parts of the ecosystem. You might just have to soundproof your windows with thick curtains or wait out the breeding season, knowing the croaks won’t last all year round.

However, suppose you find you have frogs on your property. In that case, there are ways to discourage them from using your backyard as a mating location. For example, you can:

Most frogs are nocturnal and they croak at night to attract mates or defend their territory during the breeding season. The loud croaking you hear is usually male frogs since most females are silent or make chirping sounds. While you can’t prevent frogs from naturally croaking to mate, there are some ways to prevent the frogs from breeding in your backyard. And if all else fails, realize the croaks typically won’t last beyond the mating season!