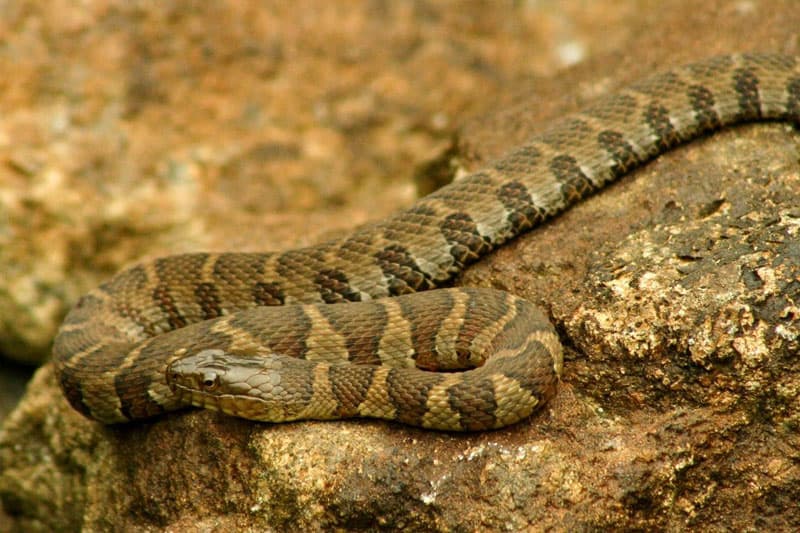 Michigan is home to an abundance of bodies of water. From Lake Superior to Lake Michigan, the rivers and wetlands in between the bodies of water of Michigan are teeming with a wide variety of wildlife. In and around those water sources lurk a wide array of different types of water snakes. This article will take a deeper look at some of the water snakes in Michigan, and tell you where to you my come across them.

For the purposes of this article, water snakes refers to not only true water snakes, but also snakes commonly seen in or near water. Otherwise known as semi-aquatic snakes.

The six water-dwelling snakes in Michigan are Northern Water Snakes, Copperbelly Water Snakes, Eastern Massasauga Rattlesnakes, Northern Ribbon Snakes, Queen Snakes, and Kirtland’s Snakes. These snakes live in and around various bodies of water and feed off the wildlife living near them.

Northern Waters Snakes are very dark in color. They are often tan, gray, or brown with series of square blotches that may ultimately merge into bands. Their coloring changes from land to water as they appear more uniform in color on land. They are often confused with the water moccasin because of their similar appearance. However, they are not venomous.

Northern water snakes prefer to live in and around lakes, ponds, marshes, rivers, and streams. They prey on various types of fish and amphibians living in these locations. They are primarily found in the lower and upper eastern peninsulas of Michigan.

The Copperbelly Water Snake is black in color with a bright orange-red belly. They prefer to live in habitats such as shallow wetlands or floodplain wetlands surrounded by forests. They can only be found in Michigan’s lower peninsula and are considered endangered.

Copperbelly water snakes mostly feed off of frogs and tadpoles. Copperbelly Water Snakes prefer to live underground during the winter months and will come up to hunt for prey in the summer months.

The Eastern Massasauga Rattlesnake is the only snake on our list that is venomous, making them one of the most dangerous animals in Michigan. While these snakes are not water snakes, they do live near water surfaces and actually hibernate partially submerged underwater. These rattlesnakes have heart-shaped heads, vertical pupils, and thick bodies

Eastern Massasauga Rattlesnake’s typically east rodents like mice and voles. However, they sometimes eat frogs and even other snakes. They are most commonly found in the lower peninsula especially near wetlands.

Northern Ribbon Snakes are actually Gartner snakes, but due to their strong swimming abilities, they make our list as semi-aquatic snakes. They are dark brown or black with three yellow, green, or white stripes.

You may also like:  9 Types of Hawks in Utah (Pictures and Facts)

The Queen Snake is a semi-aquatic snake. They are brown, olive, or gray with a yellow stripe on their side. Adults tend to be more uniformly dark with a yellow underbelly. They prefer warm streams with rocky bottoms. However, they also will live around lakes, marshes, canals, and ditches.

The Queen Snake’s main source of food is crayfish. In fact, crayfish make up about 90% of their diet. They also eat frogs, tadpoles, newts, and fairy shrimp. You can find them in the southern lower peninsula near the water’s edge.

The Kirtland Snake is the smallest on our list. It is semiaquatic and is a great swimmer, but it rarely swims. They are gray in color with dark splotches on their back. The snakes have a red belly with black spots along the edges.

Kirtland snakes prefer wet habitats near sources of freshwater like streams, ditches, marshes, and ponds. They will often be found in grassy areas surrounding these water sources. Their main source of food is earthworms and slugs.