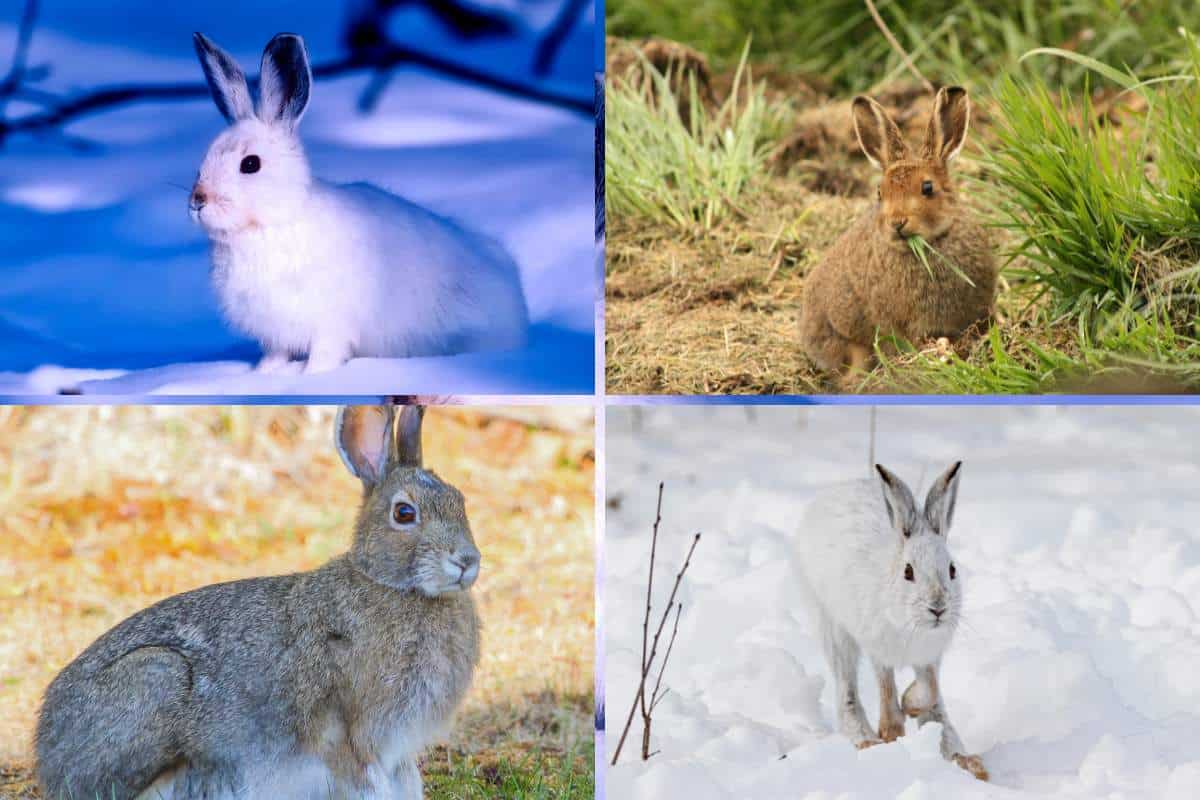 Hares are members of the genus Lepus. These herbivorous mammals spend most of their lives alone or living in pairs. Most species have strong hind legs and can jump long distances. This article discusses the characteristics, diets, and behavior patterns of fifteen different types of hares.

Hares are also fast runners. Most hares have long ears that they use to regulate their body temperature, and some have shorter ears to help them stay warm. There are around 40 different species of hares in the world. Many species have a lot in common, while others are a bit more unique.

In this article we look at 15 of those species a little bit closer and learn some cool facts about them.

The following list of hares contains not only some interesting facts about these species, but we included images of many of them. Enjoy!

Snowshoe Hares can be found in North America in boreal forests and in mountain ranges like the Rockies and the Appalachian Mountains. These hares get their name from their large, furry feet that help them walk on snow, much like snowshoes help humans. During the winter, snowshoe hares are white, and in the Spring, they turn brown.

The Arctic Hare lives in the Arctic tundras of North America. Their thick fur and smaller surface area help them conserve body heat to survive the harsh winters.

They are bright white during the winter and blueish-gray during the spring and summer, which helps them blend in with their surroundings. These creatures are very fast, clocking in at up to 40 miles per hour.

The Alaskan Hare is one of the largest hare species. Unlike most other hares, the Alaskan hare has shorter ears. Hares that live in colder environments tend to have shorter ears to help with thermoregulation.

The Alaskan hare is white with black-tipped ears in the winter and dusky brown in the spring and summer. While mostly solitary, they do congregate during the mating season, which occurs during late winter.

Mountain Hares are found in Scotland and northern England. Like many other hares that live in areas where it snows, Mountain hares are white during the winter but have a grey-brown coat in the warmer months.

Like most hares, Mountain Hares do not dig burrows. Instead, they create shallow indentions in the ground called forms.

Scrub Hares have grizzled-grey fur with black spots and white mixed in. They also have a distinctive reddish-brown patch of fur behind their ears.

Female scrub hares are typically larger than males. This species can be found in Southern Africa in the scrubs, tall grasslands, and savanna woodlands.

The Yunnan Hare is native to China, with the majority residing in its namesake city, Yunnan. Unlike some other hare species, the Yunnan Hare has short ears, measuring between 3.8 and 5.3 inches. Male Yunnan hares build straighter, shallower burrows, while females build deeper, more oval-shaped burrows.

You may also like:  Do Deer Eat Impatiens? (Answered)

Tolai Hares are yellowish-brown and grey hares native to Mongolia, Central Asia, and Central and Northern China. These nocturnal hares spend their nights searching for food such as grass, herbs, and roots. It typically shelters in forms like other hares but does dig a burrow for breeding.

Desert Hares can be found in Northwest China, Central Asia, and western India in the grasslands and scrub regions. Desert Hares have small heads and short tails and grow to be around 19 inches in length.

Their coloration ranges from sandy-yellow to brown, with grey and black mixed in. These herbivorous creatures like to eat roots, berries, seeds, and other plant matter.

The Corsican Hare is also known as the Italian Hare or the Appenine Hare. This species can be found in Southern Italy, with large populations in Sicily and Corsica. Corsican Hares live in bushy areas and woods from sea level to elevations of up to 7800 feet.

These hares are grayish-black with white and reddish-gray fur mixed in. This species breeds year-round, with most females having three to four litters per year.

The Granada Hare or Iberian Hare can be found on the Spanish island of Majorca and the Iberian Peninsula. These herbivores enjoy eating grass, seeds, and other plant matter.

This species is reddish brown with black fur along the back and white fur on its underbelly. They have long ears to help regular their body temperature and listen for predators.

The Manchurian Hare can be found in northeastern China and eastern Russia. They can measure up to 19 inches in length and typically weigh around four and a half pounds.

Compared to some other hare species, the Manchurian Hare has short hind legs and small ears. This species, while not considered threatened as of yet, faces issues due to fighting for habitat space with Tolai Hares.

The Woolly Hare is native to western and southwestern China and can also be found in India and northern Nepal. They are typically found at higher altitudes, up to almost 18,000 feet.

Like most other hares, the females are larger than the males. This species can survive in extremely dry conditions, unlike many other hare species.

Ethiopian Hares are medium-sized members of the hare family, measuring between 18 and 21 inches in length. These brown hares have black fur sprinkled across their bodies and whitish-grey fur on their underbelly.

The Ethiopian Hare is native to Africa, specifically Ethiopia, southeastern Sudan, and northwestern Kenya. One of their main predators is the spotted hyena.

The African Savanna Hare, as its name suggests, is native to the African savanna. They reside in sub-Saharan Africa from the Atlantic coast to Ethiopia. They are not found in the African rainforests, though.

This species measures between 16 and 22 inches at the shoulder and weighs between three and seven pounds, so they aren’t very large. This species runs in a zigzag pattern because, like other hares, they cannot see directly in front of them. This is due to the placement of their eyes on either side of their heads.

The Hainan Hare can only be found on Hainan Dao Island, which is a part of China. This species is quite small, measuring around 16 inches in length and weighing around 3.3 pounds. They also have short ears, measuring just under four inches.

By comparison, most hare species have ears that reach lengths of about 8 inches. Not much is known about this species because they are shy and mostly nocturnal. Like most other hare species, Hainan Hares do not burrow.