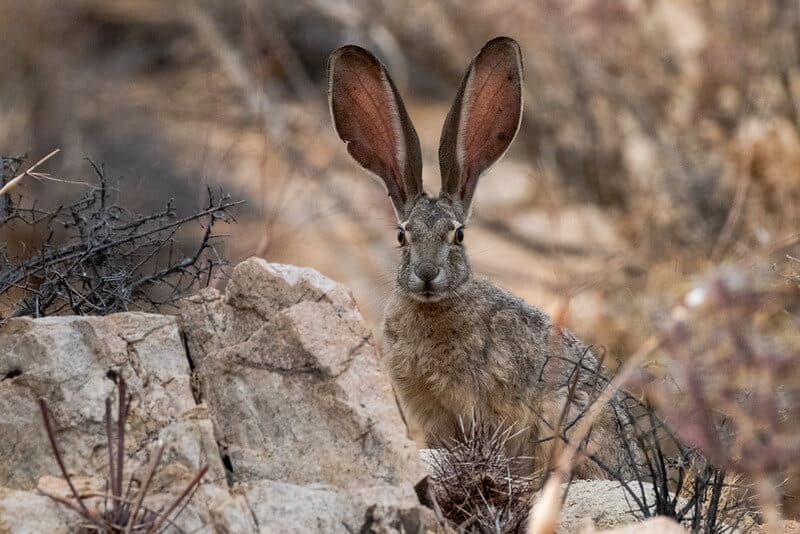 One of the best things about nature is the extremely diverse species that live on our planet. Every animal has it’s own characteristic features that make it unique. One thing that may set certain animals apart with just a quick glance is having long ears. Long ears can improve hearing, but for some species that is not their only function. In this article we will take a look at 11 animals with long ears and learn a little about each species.

Some of these animals developed their ears to improve their hearing. Sharp hearing can be extremely helpful both for hunting as well as escaping predation. Many of the animals on this list can move their ears to help pinpoint sounds.

Another use for long ears that many people don’t realize is to help the animal cool down. Their long ears contain many blood vessels, but the skin is fairly thin. This means the blood vessels are close to the surface and heat can readily escape. The blood cools down and then circulates back down into the body.

Whatever the use, all of these animals are incredibly interesting and most are adorable. Let’s dive in!

Native to the Sahara Desert in North Africa, fennec foxes use their 4-6 inch long ears both to help them find prey and to help keep them cool in the extreme heat.

These foxes are omnivores that feed mainly on insects but will eat just about anything they can catch, including lizards, birds, eggs, small rodents, and even rabbits, which are often bigger than they are. In addition to meat, they also consume roots and plants that provide them with much-needed hydration when they are unable to locate water.

While most deer have good sized ears, the mule deers are the largest. Their name even comes from this fact, since the large size and ear shape resembles that of a mule. They can move each ear independently, helping them listen for potential predators that may try and sneak up on them. Mule deer’s main predators are coyotes, wolves, and cougars.

The black-tailed jackrabbit, also known as the American desert hare, can reach speeds of up to 40 miles an hour and is capable of jumping more than 15 feet.

Native to the Western United States, the jackrabbit can be found from Washington to California, and east to Texas and Nebraska. In these states, it is found mostly in prairies, deserts, and occasionally on farmland.

These animals are herbivores that use their long ears to detect and escape predators.

The serval is a medium-sized wildcat that is native to the savannas of Africa. Here it feeds on a plethora of game, including fish, birds, small animals, reptiles, frogs, and even insects.

Servals use their ears to help detect prey and to avoid larger predators. They are adept hunters that catch their prey by leaping high into the air and pouncing on their target.

Servals live solitary lives and only come together to breed. The rest of the time, they live in their own territories, usually far away from developed areas.

This large-eared bat species is native to California, Nevada, Arizona, and Mexico. In its range the California leaf-nosed bat is found mainly in desert scrub areas and is known to roost in caves and mines.

They eat mainly insects but also feed on fruits from cactus found near their caves. These bats hunt mainly by eyesight but can use echolocation when necessary. It’s said with their large ears that they pick up sounds as minute as crickets walking.

Caracals are found throughout Africa and as far north as India. They live in savannas and forests both independently and in mated pairs. They are mostly nocturnal, and are secretive if out during the day.

These small cats are about 25-40 pounds and are recognizable by their large tufted ears. It is thought that these ear tufts are used for visual communication, since caracals have been observed shaking their heads and ear-tufts at each other.

They are carnivores and feed primarily on small animals, birds, and antelopes.

The Bilby is a primitive Australian marsupial. Once found throughout Australia, one species of bilby has gone extinct and the other lives mostly in the deserts and grasslands of the country.

These animals are a nocturnal burrowing species. They spend their days inside their deeply dug burrows and their nights foraging for food. Bilbies are omnivores and feed on plants, seeds, fungi, fruit, and insects. They do have rather poor eyesight, so they use their ears and noses to help find prey.

The bilby rarely drinks water and stays hydrated from the food it consumes. This adaptation is what allows them to thrive in such inhospitable areas.

Bat-eared foxes are adorable small members of the canid family. Reaching only 7-9 pounds, these small foxes eat mainly termites and dung beetles, but will also feed on other insects, birds, eggs, and small animals if they get the chance.

Bat-eared foxes live on the African savanna in small family groups consisting of a monogamous mated pair and their children. Parental care is shared by both parents, but the males typically do more of the rearing than the females.

The ears of the bat-eared fox are highly developed and allow them to hear predators coming and are said to be sensitive enough to pick up the sound of beetle larvae hatching.

The largest ears in the animal kingdom belong to the largest land animal, the African bush elephant. These majestic animals can flap their large ears back and forth to keep themselves cool, and in territorial displays with other animals.

African bush elephants live throughout Africa and each herd is led by a matriarch. Mature males are solitary creatures that only join herds during the mating season.

African wild dogs, also known as African painted dogs, are members of the canid family. They live in large packs similar to North American wolves. Each pack is led by a dominant pair and they are the only ones that breed.

The pack hunts as a group and they use their large ears to listen for prey and to communicate with each other during the hunt. Their ears also help them to stay cool.

African wild dogs live in sub-Saharan Africa and, like zebras, each animal has a unique pattern that distinguishes them from other members of the group.

While the basset hound isn’t a wild animal, it has been selectively bred over generations for its incredibly long ears. It would be hard to have an article on animals with long ears and not include them!

This incredible sense of smell has made basset hounds prized hunting animals as well as tracking animals for police officers and rescue teams.

While the basset’s ears are helpful for their job, they can also be prone to ear infections, so owners of bassets have to work hard to keep them clean.