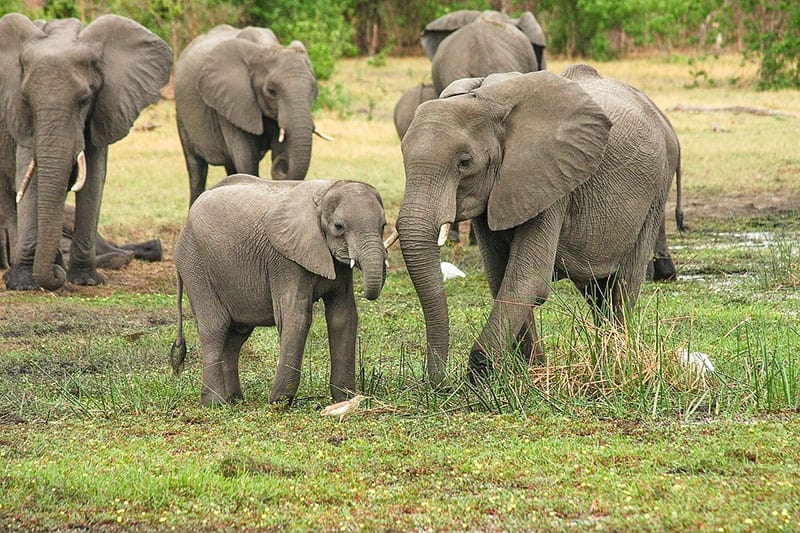 For many of us, elephants are an exotic animal we might only see at a zoo or on a safari. Many people don’t realize that there are actually different types of elephants. When it comes to the actual number of elephant species, you may find different answers, primarily because of the presence of subspecies. In this article we will look at the 3 main types of elephants, as well as a few subspecies.

Elephants are the largest living land animals today, and are quite recognizable not only for their size but their long trunk. The trunk is a unique feather among all elephants that they use for drinking, eating, digging, grasping and more. While they may look similar at first glance, each species has slightly different traits that help specialize them to the environments they live in.

Asian elephants are well known for being smaller than their African counterparts, however, there are more differences than just their size. Asian elephants don’t all have tusks. In fact, it’s more common for them not to have tusks. This genetic trait only shows up in some male elephants and not at all in female elephants. Instead, female elephants will grow a “tush,” which is a slightly elongated tooth. This will be visible outside the mouth but usually won’t grow more than a few inches.

Asian elephants also have a convex back and one “finger” on the tip of the trunk for picking up food. The species creates tight social bonds, and females move within a herd structure. Males will leave their herd once they’re strong and have been weaned from their mothers between the age of seven and ten years old.

From then, males will join bachelor herds and join female groups only to mate. Since the gestation for an Asian elephant is between 18 and 22 months, they are not receptive to pregnancy for much of their lives and will usually only have a few offspring.

These are notable traits among all Asian elephants; however, some physical characteristics differ between subspecies.

The Indian elephant subspecies is one of the most widespread, accounting for most Asian elephants that aren’t residing in Indonesia or Sri Lanka. For those traveling to popular tourist destinations like Thailand or India, this is the elephant that you will find.

The Sri Lankan subspecies are known for being the largest of the Asian elephants. They are usually a darker gray color than their counterparts and can only be found in Sri Lanka.

There is debate about whether or not there are two subspecies within Indonesia. The Borneo pygmy elephant also resides in Indonesia but has not yet been established as a subspecies. The Sumatran elephants are smaller than the other two subspecies and have longer tails, slightly larger ears, and a softer, more youthful-looking face. It’s thought that this subspecies is also the least aggressive of the Asian elephant family.

You may also like:  Are Dolphins Smarter Than Humans?

However, if the pygmy elephant is ever established as a subspecies, they would be the smallest.

The Savanna elephant is the poster child for African safaris. They’re the largest of the elephant species and often have impressive tusks. Most individuals of the species grow tusks, although they’re genetically being bred out more due to increasing poaching rates.

The species generally range through 23 countries, primarily in eastern and southern Africa with open landscapes, like the savanna. The largest populations can be found in Botswana, Zimbabwe, Tanzania, Kenya, Namibia, Zambia, and South Africa.

They are known to be the most dangerous species of elephants in part because of their large stature. The African elephant has a concave back, and they have two “fingers” on their trunk for picking things up.

Their ears are significantly larger than those of Asian elephants and are shaped much like the continent of Africa. The size of their ears helps them cool their bodies down more efficiently when they’re exposed to the hot African sun. As they flap their ears, it cools the blood in the ears, which then circulates throughout the body, effectively cooling them off.

This species travels in herds and has a very similar social structure to Asian elephants. However, in this species, it’s not uncommon to find clans that consist of several herds which can grow into groups of several hundred elephants traveling together. Because they live in the harshest environment of all elephant species, they often forage for any plants or fruits they can find during the dry season.

The forest elephant resides in the forests of central Africa alongside other critically endangered species like mountain gorillas. They are smaller than savanna elephants, and their tusks generally point straight down towards the ground rather than being curved upwards. This is mainly because they rely on digging in the soil for nutrients like salt.

This species resides in female-focused herds of up to 20 individuals. They eat a similar diet to other elephants, including leaves, grasses, tree bark, fruits, and vegetables. While there has been debate around the existence of the African pygmy elephant, up until now researchers have found that these individuals are simply forest elephants that appear smaller in size. This could turn into a subspecies of the forest elephant overtime; however, there is no evidence of that happening at this point.