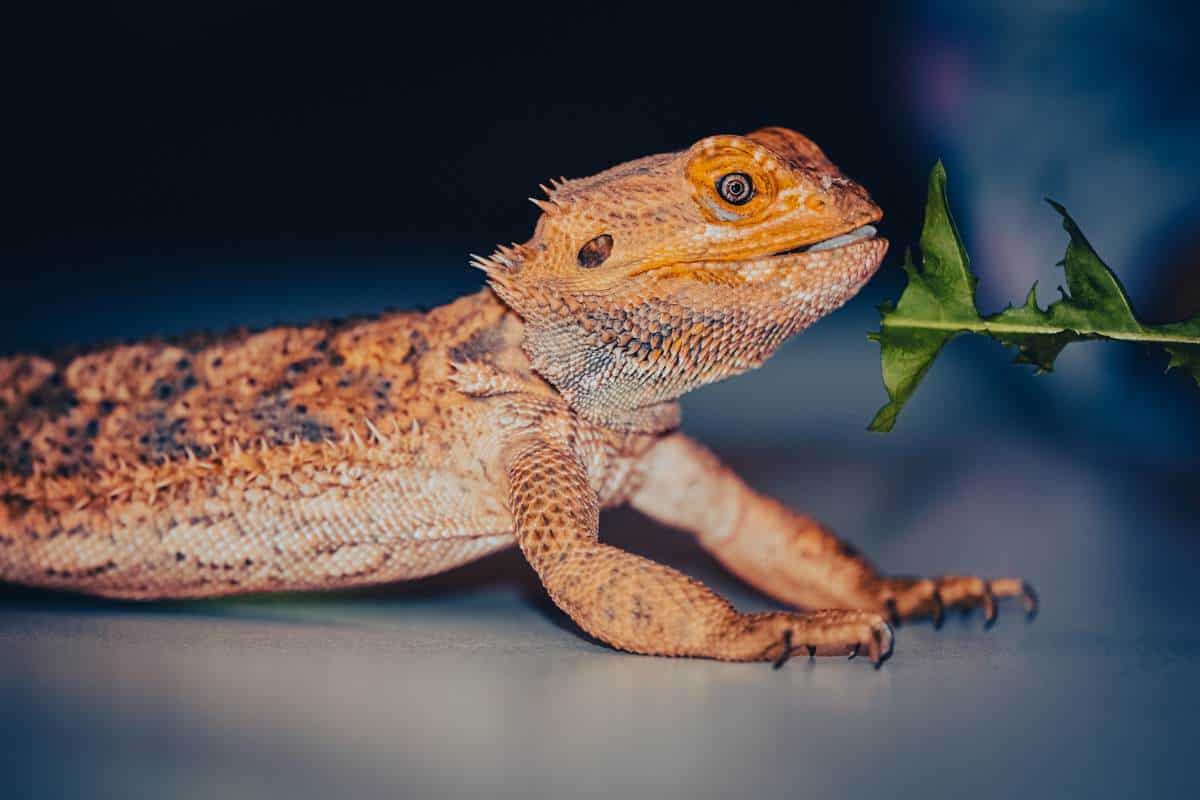 It can be disheartening to see your bearded dragon refusing food, whether from your hand or his food dish. Beardies are great pet reptiles, even for beginners. They bond well with their owners and eat a variety of foods, from fruit and vegetables to insects. It’s important to know what makes these animals choose whether or not to eat. In this article we go over 9 reasons why your bearded dragon is not eating.

9 reasons why your bearded dragon might not be eating

Parasites usually mean weight loss and gastrointestinal difficulty for bearded dragons. Parasites hang out in the intestine and either suck blood or eat the food that comes down from the stomach.

There may be visible eggs or worms. If you see that, schedule an appointment at the vet right away.

2. It is full and doesn’t want to eat more

One of the most innocuous reasons that your bearded dragon has stopped eating is that it might simply be full!  Beardies change and grow depending on what temperature their enclosure is, what part of the world they live in, and how old they are.

Males eat more than females, and a pet owner who has only ever owned males might grow concerned that the female isn’t eating enough, when in fact, she’s eating just right.

If you continue to be concerned, keep a record of the beardie’s food intake and compare it to average normal rates of food intake of other beardies; you can find this information online or from veterinary offices.

3. It’s growing from a baby to an adult

Baby bearded dragons eat only insect foods. Adults’ diets pivot in a totally different direction: plants. The transition from mostly insects to mostly plants can be difficult and stressful to the bearded dragon and its owner.

If you’re going through this transition, don’t be scared. Consult your animal handling book and keep a record of what your beardie eats.

Even if the baby beardie refuses to eat a vegetable, continue to offer it. Its taste buds will change over time and it will acclimate to the new diet.

4. You’re feeding it the wrong food

If you continue to feed a beardie too many insects, it may reject them, if it doesn’t eat too many and grow fat. If you feed a beardie something poisonous, it may grow ill and refuse all other food options.

Even bearded dragons which are fed correctly can be choosy about their diets. Some have personal preferences, such as preferring butternut squash over kale. Others may have no qualms with eating the same thing every day.

5. It’s about to enter brumation

Brumation is the hibernation-like state that some bearded dragons enter into on a seasonal or yearly basis. A bearded dragon prepares for brumation by digging a burrow and clearing out its digestive system.

This ‘clearing out’ process means that the lizard refuses to eat more food which it would have to digest. It allows the full digestion cycle to be completed before it goes to sleep.

6. Your bearded dragon is experiencing a major stressful event

Bearded dragons usually lead quiet lives except for some major events most pet owners have to deal with every now and then.

A few of these stressful events include:

Coming home from the pet store is one of the most stressful experiences in a bearded dragon’s life. It is excited and ready to be aggressive with anyone who handles it. Clearly, it is not interested in eating.

Second, threats from other household pets (like a dog or cat) or another animal in the same enclosure can force your beardie into a fight or flight response, where it doesn’t want to eat. Removing the threat is the only way to help your beardie calm down.

Badly appointed enclosures are a third reason bearded dragons fail to have an appetite. Without a private place of her own, your beardie can’t let her guard down to munch on a worm; she’ll be watching and waiting for a predator to pounce.

A sick bearded dragon’s metabolism doesn’t operate like it would normally. The small lizard doesn’t listen to the urge to eat and forage because it is in pain and doesn’t want to expend any extra energy.

In a sick bearded dragon, the immune system works overtime to remedy potential illness causes by bacteria, viruses, parasites, or fungi. Bearded dragons are common pets, but they have only grown common in recent decades. Little is known about the ways they indicate that they are sick.

Many animals refuse food and water when they know they are about to die. Bearded dragons share this trait. In the wild, bearded dragons may live to be five or six years old.

In captivity, that number doubles, and sometimes even triples. When your lizard reaches about ten years old, you’ll be able to tell that he’s older. His skin will be more lightly colored than that of a younger lizard.

9. Temperature in the enclosure is too hot or too cold

Bearded dragons require external heat to be just right in order to fuel their metabolic processes. One such process is the process of digestion.

If it’s too hot in the enclosure, the bearded dragon will have no way to cool off from the heat produced by digesting food. It doesn’t eat anything in order to not risk getting overheated.

if it’s too cold in the enclosure, the bearded dragon won’t have enough energy from the ambient temperature to fuel her muscles and cells to hunt and eat an insect, worm, or even vegetables. The raw energy expenditure is just too much.

Remedy this situation by providing a heat lamp and installing a thermometer on the inside walls of the cool and warm sides of the enclosure. This makes a world of difference in ensuring that the eating habits of your beardie are due to behavioral constraints, not because of inappropriate temperatures.