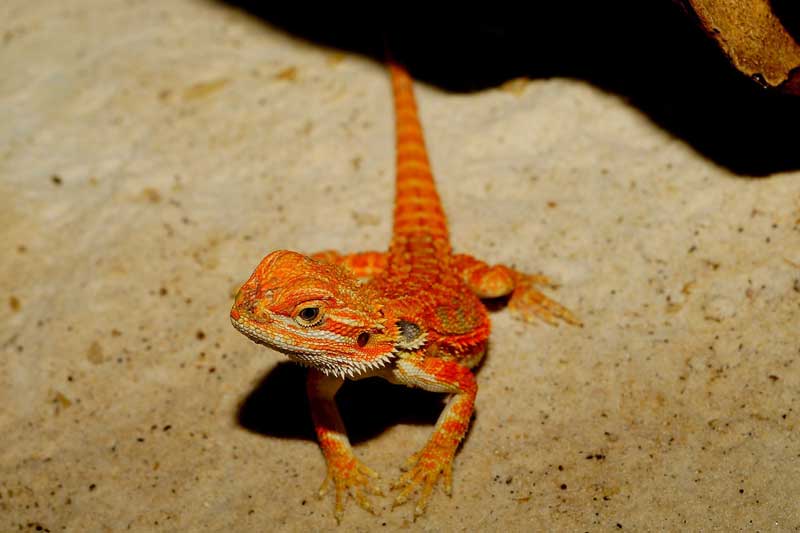 Bearded dragons have pretty impressive self-control when it comes to food. As desert animals, it’s instinctual to ration food,  plus they have the capability to go for long periods without in the wild. Still, this can be concerning for many Bearded Dragon owners, so here are some common reasons why your bearded dragon is not eating.

6 reasons why your Bearded Dragon is not eating

Something as simple as moving their terrarium to a new area of your house or adding new accessories like branches can cause Beardies to stop eating. If you notice this happening, the easiest thing to do is remove the offender from the newer environment and watch them for the next couple of days, potentially up to a week, for any further changes in diet.

If you see their appetite return, then you know not to place their terrarium in that spot again and you can just throw away whatever it is you removed from their home. Beardies are surprisingly sensitive to their environment.

To ensure their comfort from baby to adult, it’s best to just get a large terrarium they can stay in their whole life without needing to acclimate them to a new one as they grow.

We highly recommend this 67 gallon Bearded Dragon enclosure from Repti-Zoo that you can get on Amazon.

Basking temperature for adult Bearded Dragons should be between 95 and 105, and even higher for babies (between 100 and 110). This should be maintained with a high quality UVB/UVA bulb.

Heat is an important factor in Bearded Dragon digestion, so if it isn’t present your Beardie won’t feel the need to eat. It should be noted this should just be the basking end of their tank. Leave the cooler end around 80-85 degrees to ensure they can leave the heat if they want. 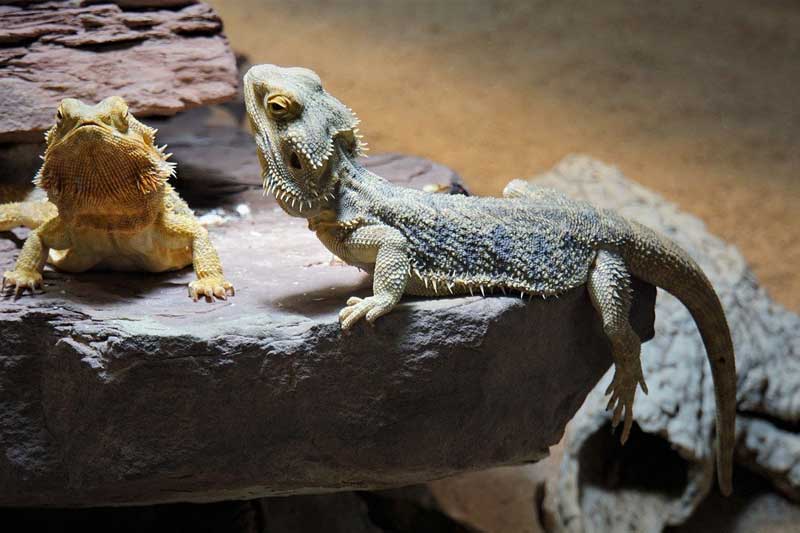 It can sometimes be the smallest of things that stress out a Bearded Dragon. When they’re stressed, they drastically lose their appetite and this is the most common reason owners see this behavior.

Loud noises and shaking around the house are common culprits. Anything that would cause you stress if you were their size should be changed if you can to ensure your Beardie is happy and healthy! Covering them with a blanket can cut down on some of this stress by reducing the light and sounds that might be overloading your Beardie.

Any Beardie owner who’s tried introducing new foods into their pet’s diet has faced a similar situation. It’s almost a battle of wills, because Beardies can go weeks, even months without eating.

Eventually after introducing something new, they’ll have to either accept their new diet or you can break down and feed them what they’re holding out for. Watch out for this though, because if you relent they’re more likely to stop eating again in an effort to hold out for their favorite food.

You may also like:  How to Get Rid of Gnats Inside Your House

As long as it looks like they’re just slowly losing weight and aren’t behaving differently, then keep up your resolve! Of course, if it’s looking like they’re getting weak and too skinny, it’s always best to put their wellbeing first and give in to their temper tantrum.

5. They’re getting ready to brumate

This can be incredibly confusing for first-time owners, but Bearded Dragons in the wild go through a form of hibernation where their metabolism slows down. With this slowing down, their appetite will decrease as well.

The easiest way to figure it out is to be aware of the time of year – Beardies go through brumation in early fall. This is because, as mentioned, heat is important for digestion. During the winter months, they receive less sunlight along with their usual plant sources going dormant until spring.

Brumation durations vary from dragon to dragon and it can take one or two brumations to figure out what to expect from yours. Some may never brumate, others might sleep for months, but unfortunately this is one you just need to sit out. Be sure to provide lots of water and keep their food stores up just in case!

This is the outcome every owner dreads, but thankfully it’s also the least likely reason your dragon isn’t eating. The biggest indicators of illness are if there are any behavioral changes accompanied by sunken eyes and patches of discolored or rotting skin, which are thankfully hard to miss.

If they’re just losing weight, you can always lightly spoon feed them stage 1 baby food like squash or chicken. This can help in the meantime if you aren’t sure and want to observe them for longer.

Make sure they’re also getting a few drips of water on their snout a day. If you suspect an illness, avoid bathing until you know what’s wrong.

How often do bearded dragons eat?

Adult Bearded Dragons (aka those older than 18 months) generally eat throughout the day out of a large bowl with food in it. When it comes to feeding, you only need to feed them once a day, every day.

How long can bearded dragons go without food?

Adult Bearded Dragons can go up to two months without any food for a variety of reasons. Don’t be concerned if a couple of weeks have gone by without them eating, as it’s most likely from one of the reasons listed above.

How long can bearded dragons go without water?

Technically Beardies can go anywhere from 3 days to 2 weeks without water, but this shouldn’t be stretched. Water should always be provided for your Beardie to keep them happy and healthy, plus the occasional misting.

Should I force feed my bearded dragon?

This varies from a case by case basis, but the general answer is no. A Bearded Dragon should only be force-fed with veterinary approval, as this can drastically increase their stress levels and further decrease their appetite.

Should I take my bearded dragon to the vet if it isn’t eating?

If your Beardie isn’t eating, it isn’t always cause for alarm. They lose their appetite for a variety of reasons, so you should look into reasons 1-5 before jumping to going to the vet. With that being said, if you do see signs of illness like scales rotting or any other obviously not normal behaviors, then absolutely take them to a vet.

Bearded Dragons can be seen by traditional vets, but it’s highly recommended to take them to a herpetologist veterinarian, or a “herp” vet for short. They have more experience with your Beardie and can run tests in house, rather than usually requiring outsourcing them.

Furthermore, Bearded Dragons should be given yearly checkups just like people. It’s the best way to catch anything that would end up being more dangerous (and expensive) in the long run. Some vets also recommend a bi-annual fecal exam due to the commonality of parasites in Bearded Dragons.

Either way, it isn’t always the worst-case scenario if your Bearded Dragon isn’t eating. Pay attention to body language and time of year while keeping habitats and diets consistent, and there shouldn’t be any major issues for your Beardie!