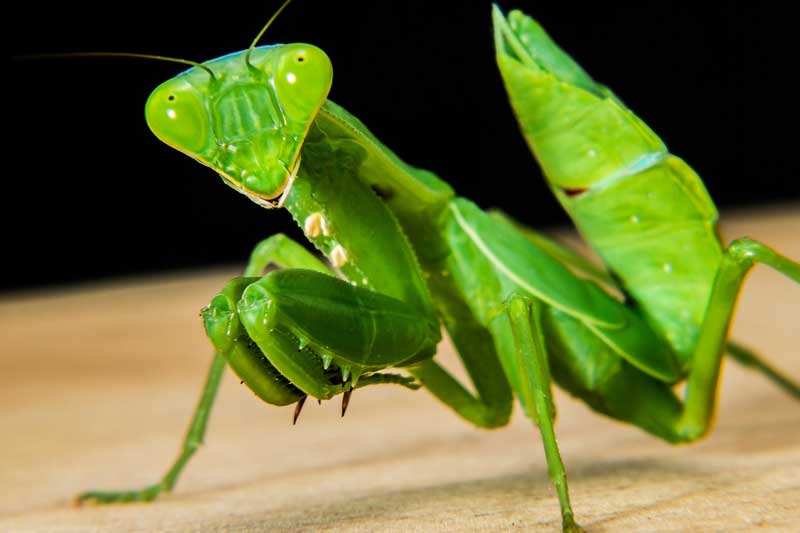 In this article, we will cover the symbolic meaning of the praying mantis, what it means if you see one, and what this insect depicts in different contexts.

No matter how you feel about insects, many people can admit that seeing a praying mantis is both special and intriguing. If you have ever watched a praying mantis, you can understand where they get their name. They often stand still, with their legs bent inward, and pose almost as if they are praying. For this reason, they are prevalent in animal symbolism.

There are actually over 2,000 different species of praying mantises, or mantises, all of which are in the Mantidae family. Many praying mantises are bright green in color and expertly blend in with the vegetation around them.

These insects are slow moving, and are often still and in the same spot. While they are often portrayed as peaceful beings, mantises are actually known for expertly hunting and eating their prey which consists of other insects and sometimes even small vertebrates like frogs, lizards, and birds. Female Praying Mantises also consume their mate after finishing the act.

What do praying mantises symbolize?

Overwhelmingly, Praying mantises symbolize a common theme surrounding a sense of calm. Praying mantises are slow moving insects, taking careful and calculated steps. They also spend much of their time remaining still, reminding us to take a moment for ourselves for some peace and reflection.

Their praying stance represents meditation, encouraging us to take some time to look inward and think critically about what’s important to us and to not get caught up in the day to day shuffle of things.

Because the praying mantis lives such a slow paced lifestyle, they are a good symbol to depict patience. praying mantises by nature are very patient beings. They are what is known as ambush predators- meaning they do not actively hunt their prey, but instead wait until they are in a position where they can sit and wait and wait for their prey to come to them.

Because of their size, praying mantises have to be very selective about what they choose to pursue and attempt to hunt. This requires even more patience on their part as they have to wait until the perfect opportunity to grab the appropriately sized prey item.

In many cultures, praying mantises represent a sign of good luck or fortune. This good luck could come to you in the forms of financial gains, romantic relationships, or friendships. If you see a praying mantis, good luck will supposedly be coming your way soon!

For example, some Native Americans see praying mantises as signs of wealth and success.

In both China and Japan, the praying mantis symbolizes courage and bravery and is often associated with the military. This is because these insects when moving only move forward and advance, but do not retreat.

You may also like:  Coyotes in Florida (What to do If You See One) 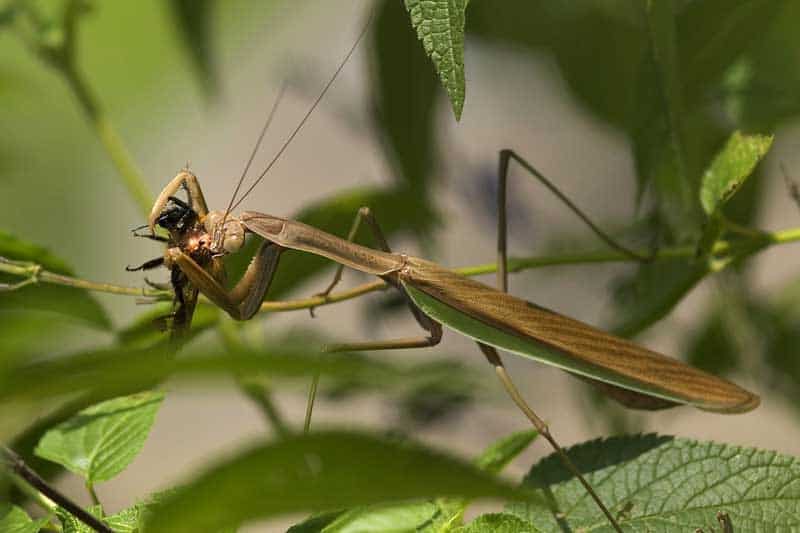 In religious texts and beliefs, animals or insects often hold important meanings and are used to symbolize certain lessons or teachings.

In Islam, praying mantises have a similar meaning. They are thought to always face Mecca, the cradle of Islam. These insects are thought to point pilgrims in the direction of the holy land, in a praying position, no less.

What do praying mantis dreams mean?

Many psychologists and spiritual interpreters agree that certain images or situations in dreams can have a deeper meaning. Praying mantises are one of these images that you may see in your dreams, and may have either positive or negative undertones.

Overall, seeing a praying mantis in your dreams often suggests that you need to look deeper into yourself to realize your full potential. There could be opportunities in your life that you are knowingly shying away from, or that you do not realize.

Being friendly with a praying mantis

If you dream of killing or harming a praying mantis, it suggests that you are avoiding your intuition and going against your gut. You may be ignoring signs in your life that are trying to tell you something. You are likely avoiding looking into yourself and are ignoring what you know deep down to be true.

It is suggested that seeing a dead praying mantis in a dream, if you aren’t the one who has killed it, could have two meanings. It could mean that you are overly distracted, and are unknowingly ignoring your intuition and perhaps are not being as mindful as you normally are.

On the other hand, seeing a dead praying mantis in a dream could suggest that you are actually overthinking and reading too far into things, without taking action.

A praying mantis attacking you

If you dream of a praying mantis attacking you, it is thought to be a sort of test to see if you have learned and grown from a recent trouble, heartbreak or conflict. How you respond to this attack in your dream is said to be linked to whether or not you have truly evolved and learned from your hardships.

Totem animals, otherwise known as spirit or power animals, are found in indigenous religions and are thought to be messengers from the spirit world and symbolize particular traits and characteristics.

For some of the reasons listed above in this article, praying mantises are a fascinating and powerful totem. Those with praying mantises as their totem animal are thought to be calm, patient, and have the power and focus to manage their emotions even in the most chaotic times.

People with a praying mantis totem are intuitive and are experts at reading into their thoughts and feelings. They are also very resilient and do not give up, even when things become challenging.

Tattoos can mean different things for different people. Many people get tattoos of animals or insects to depict a characteristic or trait that they admire or find interesting, while others may get a tattoo of a certain insect or animal simply because they like the way it looks.

There are several meanings or themes associated with praying mantises that are interesting tattoo concepts. For some, a praying mantis tattoo can mean:

In many cultures, seeing a praying mantis is a sign of good luck. Oftentimes, it is a sign that fortune will be coming your way soon in some form or another. This luck may come to you in money, relationships, or friendships.

For many reasons, praying mantises are a fascinating symbolic animal. While they are overwhelmingly associated with positive attributes like peace, calmness, and focus, they also have a dark side for some cultures.

Regardless, praying mantises play an important role in both religious and cultural symbolism and are an intriguing and interesting insect in their own right. While they may look somewhat intimidating, they aren’t out to hurt people. Some animals however, do fall prey to the praying mantis.