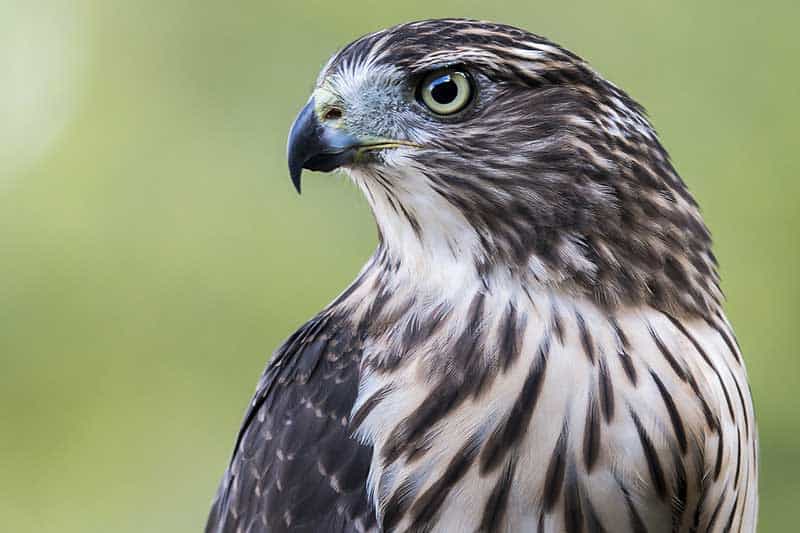 Whether you’re a bird enthusiast, resident to the state, or just simply curious, you may be wondering what types of hawks live in the state of New Hampshire. In this article we’ll answer that very question and show you the 8 different hawks in New Hampshire, as well as learn a little bit about each species!

You may also like: 7 species of Hawks in Vermont

Red-tailed Hawks are the most common hawks in North America and can be found in most parts of the country. These large hawks live in Southern New Hampshire all year long, but in the northern half of the state they have a breeding only range, and may migrate to warmer climates in the winter.

Red-tailed Hawks are commonly seen soaring above looking for prey with their amazing vision or perched along the roadside on telephone poles. Learn more about the Red-tailed Hawk here.

Rough-legged Hawks have a non-breeding range throughout the state of New Hampshire. For most of the year they’re found in the open Arctic tundra, where they also breed. However, during the fall they migrate south to spend the winter in the much of the United States and southern Canada. It’s during the winter they’re found in New Hampshire, though they tend to be harder to spot than other species. Their populations are pretty variable from year to year and often depend on how abundant lemmings, a major food source, are in the Arctic.

Northern Harriers are the most owl-like hawks in New Hampshire and North America. They rely heavily on their acute hearing as well as their excellent vision to hunt for prey.

The Sharp-shinned Hawk is the smallest hawk in Canada and the United States. They can be found all over the place in North America, including New Hampshire. However in northern parts of the state they may migrate to warmer climates in the winter. You can see their range map here.

You may also like:  8 Species of Woodpeckers in Nebraska (Pictures)

Very similar to the Sharpies in looks with a steely blue back and wings and reddish barring on the belly, but Cooper’s are larger overall. It’s not uncommon for there to be discrepancies between large female sharpies and small male Cooper’s, since female hawks are larger than males. Cooper’s Hawks have a flatter head and rounded tail, which can help distinguish the two.

Cooper’s Hawks can be found in areas of Southern New Hampshire year round, in the rest of the state they have a breeding only range.

With a range very similar to that of the Cooper’s Hawk, Red-shouldered Hawks can be found year-round only in Southern New Hampshire, in most of the state they are only there for mating in the warmer months. These hawks have deep, reddish chestnut colored feathers that appear marbled on the wings with bars on the breast. They have stark bars on the tail and pitch black eyes.

Red-shouldered hawks live in wet deciduous woodlands. If you’re out and about and catch sight of this bird, you can expect to find water of some sort nearby such as swamps, rivers, or marshes.

Unlike other species that feed on birds, Red-shoulders prefer non-feathered prey if they can. They eat small mammals, snakes, lizards, and amphibians.