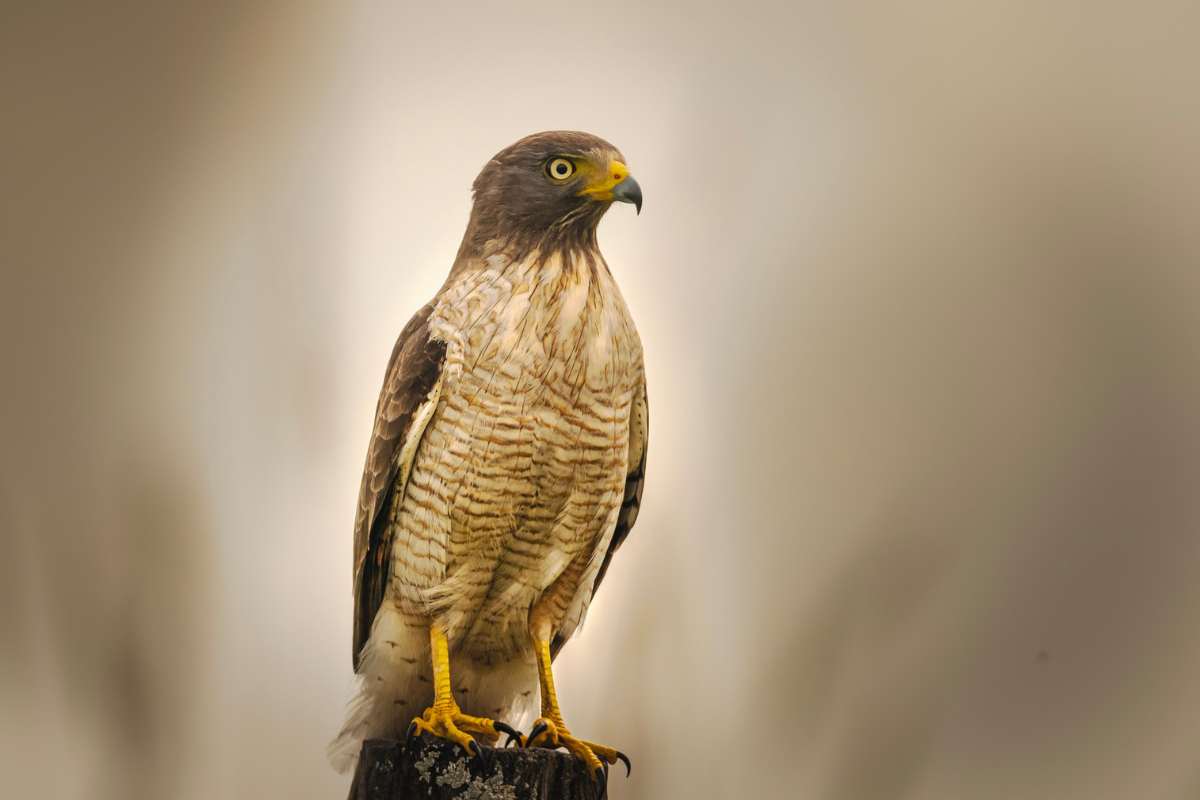 Although there are many different species of hawk, they all share certain physical and behavioral characteristics. Hawks are typically large birds with long, pointed wings and sharp talons.

They are very powerful flyers and can reach speeds of up to 200 miles per hour when diving on their prey. Hawks have excellent eyesight and can spot a small animal from great heights. Despite their fierce reputation, hawks are actually quite shy around humans. Keep reading to learn more about these 8 characteristics of hawks.

A trait is the variation of this characteristic that a certain animal expresses. Examples of eye color traits would be blue eyes, hazel eyes, and brown eyes.

Some populations also have adaptations. An adaptation occurs when an entire population of animals selects for a single trait that benefits their survival and it becomes the dominant trait in the population to the point that any other trait rarely, if ever, occurs. An example of this would be an entire population evolving to have only brown eyes expressed because they call less attention than blue eyes.

A hawk’s sharp vision is one of its most important survival adaptations. Hawks can see up to eight times better than humans, allowing them to spot prey from great distances.

Hawks have such good eyesight because they have a high density of cones in their retinae, which allows them to see more detail than other birds. This trait is especially useful for hunting, as it allows hawks to spot small prey from far away and then swoop down on them for the kill.

Hawks have an auditory fovea, which is a specialized area of the brain that is responsible for processing sound. This allows them to hear prey rustling from far away, and to zero in on the sound to capture their prey. Hawks can hear frequencies that are up to four times higher than humans, and this allows them to detect the faintest of sounds.

Hawks are known for their sharp talons which they use to catch prey. Talons are the nails of birds and are located on their toes.

Hawks’ talons are curved and very sharp, making them excellent tools for hunting. Hawks use their talons to grip their prey and then kill it by either crushing its skull or puncturing its brain. Talons are also used for self-defense; if a hawk feels threatened, it will use its talons to attack.

Hawks’ talons are constantly growing, so they must sharpen them regularly. Hawks will often perch on rocks or trees and use their talons to scrape off the tips of their nails.

Talons are an important part of a hawk’s anatomy and play a vital role in their hunting and self-defense strategies. Without their sharp talons, hawks would not be able to survive in the wild.

Hawks typically have broad and rounded wings, which help them to maneuver easily in the air. Their wingspan can range from 2.5 to 3 feet, and their wing area is usually between 9 and 10 square feet. This allows hawks to fly at high speeds and maintain a steady course while hunting prey.

The shape of their wings also gives them an extra lift, making it easier for them to take off from a perch or tree branch. Hawks use their powerful wings to soar through the air, and they can often be seen flying above open areas in search of food.

Hawks are sexually dimorphic, meaning that there are visible differences between males and females of the species. The most obvious difference is size, with females typically being larger than males. This size difference is due to sexual selection, with males choosing larger females as mates because they are more likely to produce healthier offspring.

Hawk vocalizations can be divided into two main types: calls and screams. Calls are used to communicate between hawks, while screams are generally used to scare away potential predators or intruders.

The most common call made by hawks is a high-pitched “kee-kee” sound, which is often likened to laughter. This call is used to signal location and identify other members of the hawk’s family group. Hawks also make a softer “chittering” sound when they are content or agitated.

Screams, on the other hand, are much louder and more shrill. They are typically only used in moments of excitement or danger, such as when a hawk is attacking its prey. The most famous hawk scream is the “shriek”, which is a long, piercing cry that can be heard from far away.

Hawks are known for their long tail feathers, which help them glide through the air with ease. These feathers also serve as a stabilizer when the hawk is flying, and help the bird change directions quickly. The long tail feathers of a hawk can be up to 18 inches in length.

Hawk beaks are curved and come to a sharp point. They are made of keratin, which is a strong protein.

This protein helps the beak to withstand the force of pecking and tearing. The beak is also covered in a thin layer of feathers, which helps to protect it from damage.